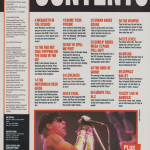 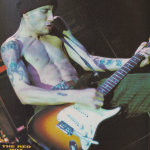 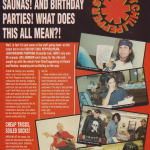 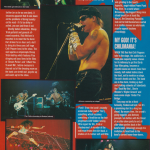 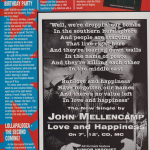 Shaven Heads! Cheap Trick Medleys! Clean Underwear! Saunas! And Birthday parties! What does this all mean?!

Well, in fact it’s just some of the stuff going down on the latest hot-to-trot RED HOT CHILI PEPPERS/PEARL JAM/SMASHING PUMPKINS Stateside trek. RAW’s very own US Snooper LISA JOHNSON went along for the ride and caught up with the whole Funk-filled happening in Illinois and Boston, snapping and scribbling on the way.

Alone in Chicago for a wedding, what’s a girl to do when the Red Hot Chili Peppers are kicking off a nationwide tour nearby, dragging RAW favs the Smashing Pumpkins and Pearl Jam out in the road with ‘em? Hell! Rent a car and drive 60 miles due west to De Kalb, Illinois, and the University of Northern Illinois where the smell of fertilized crops permeates the air (remember, folks, this is the heartland of America) but where the Smashing Chili Jam action seems pretty damn hot.

Arriving at the venue, the band are discovered relaxing in their dressing room. Guitarist John Frusciante has just completed a pastel drawing (reminiscent of a Matisse interior). Flea, warming up on his bass, is surrounded by a pool of freshly shaved hair. Drummer Chad Smith swigs back a beer as frontman Anthony Kiedis plots out the night’s set list.

Crew members come and go, finalizing last minute details. And most importantly, everybody is wearing clean socks and underwear! The key to this god-like cleanliness is clearly laid out in black ‘n’ white in the band’s rider which specifies that fresh socks and underwear (both briefs and boxers!) are to be ready and waiting in the dressing room at every gig.

On enquiring further (or as far as one dares), it becomes apparent that it cuts down on the problems of doing laundry on the road- if it’s too dirty or soiled, you can just throw it out.

Shortly before showtime, Cheap Trick guitarist and all-round eccentric, Rick Neilsen is escorted in to meet the band. He’s driven for an hour and a half to bring his three sons (all huge Chili Pepper fans) to the show. The visit sparks an impromptu Cheap Trick medley which features Flea slinging out bass lines to the likes of ‘Dream Police’ and ‘I Want You to Want Me’, before everyone is cleared out of the dressing room so the band can stretch out, psyche-up and warm up for the show.

THIS PLACE IS JAM HOT!

Meanwhile on stage Pearl Jam’s Eddie Vedder has just lost his favourite ‘T’-shirt, a charming little Butthole Surfers number, after diving into the crowd during ‘Porch’ (from the band’s recently acclaimed debut platter ‘Ten’), something which becomes something of a tradition as the tour progresses with Vedder having little regard for life, limb or chestwarmer! A member of the audience throws the shirt back, a shadow of its former self and little more than a rag. Vedder’s just glad to get it back.

Next up Illinois’ very own Smashing Pumpkins storm on. From the first note, the audience is transformed into a sea of melding human flesh. It’s evident that the Pumpkins are big here, as bodies fly overhead, moshing, slamming and grinding to the band’s hypnotic, angst-ridden Power Punk Pop drive. In a world where Nirvana are the biggest thing since sliced bread (or at least Big Mac’s), the Smashing Pumpkins look set to find themselves courted in a similar manner as wholesale popular appeal beckons rewardingly.

When the Red Hot Chili Peppers take to the stage, the auditorium, a 2000-plus capacity venue chosen for its intimacy to get that Early Tour Vibe going, becomes a gigantic sauna as steam rises from sweaty, half-naked bodies down the front, not to mention on stage. The set’s frantic and fun. The band are in fine form, kicking up dust and shaking cobwebs off standards like ‘Suck My Kiss’, Stevie Wonder’s ‘Higher Ground’ and soon-come single ‘Under the Bridge’.

They may not be at their furiously, Funked- out best, but it’s a promising start to a long tour ahead. By encore time, the crowd’s going hogwild, and Anthony prompts ‘em further with the threat of an after-show party to end all after-show parties back at the band’s hotel. Amazingly enough his invitation to head back to the band’s current home-from-home, the Days Inn, is accepted en masse and half the crowd appears heads for the unsuspecting hostelry.

The next morning there’s still a few tell-tale signs of the partying the night before.

Jump ahead two weeks to Boston, the site of the next big party. Only this one is on stage!

It’s Anthony’s birthday, and when a female exotic dancer chickens out the last second, Pearl Jam roadies John and Eric step in to fill her shoes, so to speak! The Chili Peppers come on for an encore, and when Flea announces Anthony’s birthday to the crowd, the singer hides shyly behind a stack of speakers aware that something’s up.

As a gift offering, Vedder clad in nothing but a sock, is carried on stage by Smashing Pumpkins’ guitarist James Iha and drummer Jimmy Chamberlin, while John and Eric try their hand at female ‘exotic’ dancing in clothes borrowed from Pumpkins blonde bass gal D’Arcy.

The circus soon unrolls a sign which the ever-creative Vedder spent most of the night before making. It reads ‘Happy B-Day Swan’ in reference to Anthony’s alter ego ‘Antwan the Swan’. The birthday boy looks a little bemused. The audience loves it. Not surprisingly, the partying continues well into the early hours of the morning.

As the daze around the band’s frantic touring schedule eases off and the Chilis take a break before Europe, it really is a question of where next?

For Pearl Jam and the Pumpkins the answer is far more definite with both band’s heading out to Europe almost instantaneously (they’ll be out there plank spanking by the time you read this).

In terms of Chili-plans, however, they now look likely to return to further US touring before possibly assuming the mantle of headliners on the second Lollapalooza tour set to kick off in the US this summer.

At the time of scrawling the Peppers are firm favourites to follow in the footsteps of 1991 headliners Jane’s Addiction with a supporting bill that could possibly include Nirvana, Hole, Soundgarden, Punk Rockers Social Distortion, The Jesus and Mary Chain, Joe Strummer and The Pogues and Ice Cube. Stay tune for more eclectic details on the culture clash front, in the meantime, catch the Chilis while they’re Blighty bound!