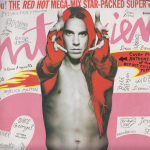 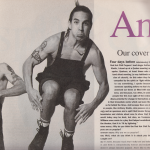 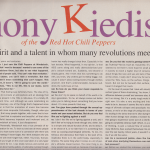 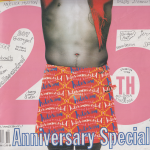 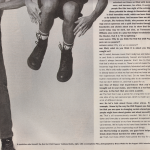 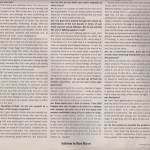 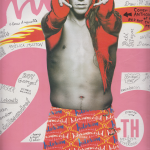 Note: This magazine was bigger than the scanner so I scanned it in half pages which are displayed in whole page order. There’s also a one page scan of the centre of the cover to show it without a join (last scan).

Our cover boy, a spirit and a talent in whom many revolutions meet

Four days before interviewing the Red Hot Chili Peppers’ lead singer Anthony Kiedis, I stood up at a Quaker meeting and spoke. Quakers, at least those who attend silent meeting (a very laid-back version of church), do this when they feel compelled by the spirit (or “light within”) to say something. I spoke because someone speaking before me had characterized our times as filled with darkness; and because, too often, it seems people like this lose sight of the extraordinary potential for change in themselves and in their immediate world, which can leave them so far behind the times. And because there are other people, like Anthony Kiedis, who possess an energy and an openness and a spirit that breaks through boundaries and clichés about eras to show that the world today may be dark, but also, as Tennessee Williams once wrote in a play that helped revolutionize the theater, that it is “lit by lightning.”

MARK MARVEL: Why do you think the Red Hot Chili Peppers are so popular?

ANTHONY KIEDIS: Why are we so popular?

MM: Well, what do you think it is about you that caught on?

AK: It’s weird, because music that I really love and believe in and think is extraordinarily honest and beautiful always doesn’t become popular. And I like to think that that’s what our music is. There’s a lot of music that becomes huge that is completely fabricated and empty to me. We’re only really capable of doing something that is directly based on what we feel and what we know and the experiences that we’ve had. So we have these built-in mechanisms of not being able to do something that we don’t believe in, and that’s good for us.

MM: One of those real experiences that you’ve brought out in your music, and I think in a real honest way, is the fact that you were a junkie.

AK: The fact that I was a junkie for a long time is only one slice of my own personal pie, which is made up of a lot of different slices.

MM: So let’s talk about those other slices. For example, I know by the way the Chili Peppers use fashion that you are open to changing certain stereotypes people might have about gender and about sexuality.

AK: That’s all unconsciously exuded. We don’t sit down and formulate a concrete approach to expressing our fashion interests or our love interests or our sexual interests. We’re lucky not to have those barriers that would prevent us from expressing such things.

MM: But by being so popular, you guys have helped break down those barriers for other people.

AK: Yeah, but many others have paved the way for us for years and centuries.

MM: I just saw the Chili Peppers at Woodstock, which I went to because I wanted to see some of the musicians there, but also to see what happened. A lot of people said, “You can’t redo that revolution.” Of course, you can’t redo a revolution. But that doesn’t mean something else can’t happen. This time, it wasn’t, “We’re going to save the world.” It was, “This is our life, this is our music, we’re gonna have fun.”

AK: That feeling was definitely there. The idea of trying to re-create an atmosphere and an ideology that was present in the ’60s is ridiculous. It’s a totally different time, and although we were celebrating an anniversary, one of the things that’s happened since then is that the promotion of music has become much more corporate. Fortunately, though, when you get that many people together, with music that is honest and that is explosive and beautiful, all that other bullshit becomes impotent and irrelevant and, at Woodstock at least, it just disappeared.

Personally, Woodstock was a true pinnacle of exhilaration for me. To look out and see all those people and to have some sort of a connection with them was something I’ll never forget. And I think everyone who was there will never forget that, either. You know, that picture you’ve got on the cover was taken at a very hyper moment for me. I was totally nervous and excited and I had about twenty gallons of adrenaline running through my body, because after that I was going to be playing with my friends onstage. And we were getting ready to party with over a quarter-million people.

Still, the world seems a little bit short on revolution to me right now. There are a few bands out there, but on the whole it seems like the computer age is really the current revolution, and that doesn’t flow well with my own natural tendency to gravitate toward organic expressions and actually do things with your hands and your feet and your body and your vocal cords and your fingers and stuff like that. That appeals to me more than sitting in a room with a screen. Even if you are creating art on a screen, personally I’d rather do it in the flesh.

MM: Speaking of flesh, do you see yourself as a product of the sexual revolution?

AK,Yes. I grew up with a father who was sexually revolutionized to the point of being, like, over the top. That sort of free-flowing sexual expression was some-thing that was encouraged and not frowned upon when I was a kid. So I didn’t grow up with any sexual shyness or sense of sexual taboo. I moved into my father’s house in the early ’70s, and he just didn’t have the normal parental outlook on sexual behavior. He was something totally different. But sexual behavior has really changed since then. Especially in the last decade. What happened, in my opinion, is that AIDS came along and really derevolutionized people’s outlook toward sex. Suddenly, sex became a deadly game. And I think that has something to do with, you know, why clothes got incredibly baggy—be-cause it wasn’t about seeing bodies through clothes anymore. And that’s understandable, because suddenly the world was at risk.

MM: So how do you think your music responds to these times?

AK: We don’t try to speak on behalf of the world or to-day’s generation. To me, art always comes out better when you’re talking about something that you know about. It’s more powerful that way.

MM: You guys have pushed through the sexual oppressiveness of the last decade in terms of your music and your sexual attitudes. But do you ever feel like you’re fighting against a wall?

AK: I don’t feel like we’re fighting against a wall, and I don’t feel we’re trying to break through one, either. Sex is a simple and natural function of life, and to deny it, or be afraid of it, or to hide from it is something that ends up causing psychological ailments. To me, it’s heinous and obnoxious that there is the level of homophobia there is in the world today, especially in America. The same thing when it comes to a lot of people’s attitudes toward women. The ironic thing is, so many people have accused us, because of our own personal desire to express our sexual feelings, of being sexist. If they only knew the equal regard that we hold people in, they would understand how untrue that is. But if I stopped too long to think about how people were re-acting to us, It might interfere with my forward progress.

MM: You’re thirty-one—do you feel cut off from the younger generation, and yet not part of the older generation?

MM: Some bands have a kind of uniform. If the Chili Peppers have one, it might be described as a birthday suit, because you wore one of the first bands that seemed comfortable taking off your clothes on stage.

AK: To me, nudity defies uniform. Initially, we got naked just because it felt good. And to do the two things that feel the greatest to us simultaneously—to play music and to be naked at the mime time—just seemed like a very obvious combination, Just an organic rush of happiness and expression. It’s also a lot easier to do what we do with the least amount of clothes on.[laughs]

MM: Do you feel the world is getting better?

AK: Truthfully? Not as much as I would like. It’s always seemed to me there’s more hope for small pockets in society to reach a higher level of consciousness about things like race and sex and lack of fear. And, on the whole, I really don’t know how far we’ve come since the ’60s. Sure, on the surface, things are different. But not too far beneath that surface, things haven’t changed that much. On the level of people that I deal with directly, I see certain types of fears diminishing. You know, fears of difference between yourself and someone else; that fear isn’t so strong. But it’s a pretty tough world to be in right now. It’s also a very exciting and interesting world to be in, because it seems like we’re either on the verge of ultimate collapse and apocalyptic never-nevemess, or we’re on the verge of turning shit around. So it’s exciting in the sense that we’re alive during this time when human beings have created a monster that is either going to experience some sort of a rebirth, or it’s going to completely destroy itself. Which, in a cold way of thinking, is just a natural flow of evolution. So many life-forms have evolved themselves into extinction over the last twenty million years, it wouldn’t surprise me if we did the same.

MM: As a recovered junkie, does the tradition of rock stars martyring themselves ever make you feel pressure?

AK: Below we started this interview, you asked me about pressure. Pressure is just something that gets in the way of natural expression, so I try not to think about it, and so far I think I’ve managed to maintain a real sense of what life is, and—when I see these people that have been making music in the public for for twenty or twenty-five years, and they’re just destroyed to the point where they can’t relate to other people—I hope I always will. I don’t ever want that to happen to me. As long as kids or geriatrics or anyone is getting some thrill from listening to our music, that’ll make me sleep a little easier at night.

AK: Yeah. Flea’s grandmother in Australia is a fan. Last time we were in Australia she came to all the shows and sat on the side of the stage. She’s in her eighties. You’d think, “O.K., she’s there because her grandson is in the band.” But every time I looked over at her while we were playing, she reminded me of an angel in a painting, with this glow of light and divinity around her.

MM: So how would you describe the perfect world?

AK: I don’t even bother trying to picture a perfect world, because I don’t think that perfection is something to strive for. I prefer imperfection. Th.’s what makes things special. You know, things that change …