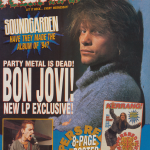 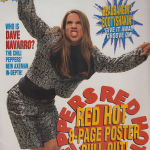 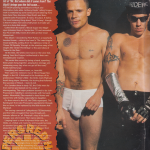 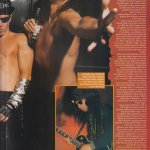 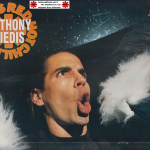 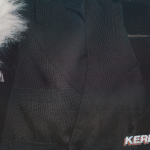 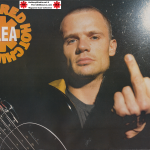 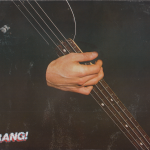 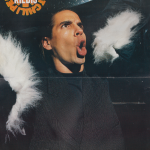 Note: I know it says 8 page article but on the pull out the last page is an
advert which isn’t RHCP connected. The Anthony Kiedis & Flea posters
were across the fold of the magazine so I rejoined the separate scans to make
full posters; the Anthony Kiedis one is here and the Flea one is on TheChiliSource.com.

The ‘Give It Away’ Groove!

‘Give It Away’ is the Chili Peppers’ freak hit of ’94. But where did it come from? The Big K! brings you the full scam…

IT’S BEEN packing dancefloors in Rock and Alternative clubs alike, Anthony Kiedis’ rolling tongue-work is matched by some serious Funk-steering from bass-face Flea, drummer Chad Smith and then-guitarist John Frusciante. It rocks. It bumps. It funks. The most amazing thing about ‘Give It Away,’ though, is that’s taken two-and-a-half years to invade your ears as a bona fide single.

Culled from the band’s ‘Blood Sugar Sex Magik’ opus (released back in September ’91 and accorded four Ks in ish [issue] 359), it sees the Chilis at their most blissed-out.

The album-recorded by Rick Rubin in a reportedly haunted house- reflects the band’s ‘70s head-trippin’ mood perfectly, cutting from the righteous romp of ‘Power of Equality’ through to the emotive sway of singles like ‘Under the Bridge’ or the acid vibes of ‘Naked in the Rain’.

At the time, the Chilis were back on the lurve trail, talking ‘bout the Pepper brotherhood in their own inimitable jivin’ manner.

“We wrote this record by being a band, spending three years living together, playing live onstage and rehearsing every day when we got off the road.” Kiedis told Kerrang!

Everything did indeed seem, er, beautiful.

Then came the meteoric rise of ‘Blood Sugar Sex Magik; in the US. It followed in the footsteps of its predecessor ‘Mother’s Milk’, the Chilis multi-platinum fourth long player. However, the touring that followed the success of ‘Blood…’ took its toll.

At a London show in early ’92, the Chilis were far from red hot and looked on the verge of disintegrating. The major problem seemed to be John Frusciante’s inability to communicate with his band-mates. Meanwhile, Flea wanted to head home and spend time with family, especially his daughter.

On their return to the US, the Chilis regrouped. The flamboyant fruit-cake Frusciante sauntered in through the outdoor, to be replaced by the little known Arik Marshall.

The touring carnival of Lollapalooza ’92 beckoned, and the Chilis struggled their way through, pit-helmets aflame an’ all. Marshall’s stay in the band, though, was short-lived. Then came silence…

Limping back to their Hollywood hide-outs, the Chilis, er, chilled and made the odd squeaking noise at assorted jams and clubs. Rumours of excess abounded before the band finally announced their new guitar player, Jesse Tobias.

A total unknown, the ex-Mother Tongue guitar player was deemed a member of the band, and even went as far as doing a full-blown interview with US mag Rolling Stone. Needless to say, his departure without playing a single show or recording with Flea and his crew came as something of a surprise!

Since Navarro’s arrival, there’s been a sense that the Chilis are about to embark on a genuinely creative spurt. Speculation about their studio activities has been ill-informed.  They have indeed given little away. All that is definite is that the foursome are set to begin work on pre-production in Hawaii in March. Expect the mood to be spiritual, sassy and slinky…

THE RED Hot Chili Peppers and Dave Navarro. One of the hottest Rock acts on the planet hooks up with one of the most gifted guitarists to emerge in the past decades. Few partnerships in rock ‘n’ roll are perfect; this at least promised to be explosive.

Since original guitarist Hillel Slovak died of a heroin overdose in 1988, the Chili Peppers have struggled to find a replacement.

First up for the gig was John Frusciante, a cool player who added some weird and wonderful licks to the Chilis’ muscular Funk Metal.  But Frusciante didn’t work out. After cutting two albums with the group- ‘Mother’s Milk’ and the watershed ‘Blood Sugar Sex Magik’ – Frusciante quit mid-tour when he tired of on-the-road stress and routine.

Next was Arik Marshall, an older and more sober figure who was dispensed with at the end of their Lollapalooza tour. Was this another personality crisis? The band simply stated that Marshall’s songwriting was incompatible with theirs.

Upon returning to their native Los Angeles, the Chilis then tried out teenage Jesse Tobias, from LA club act Mother Tongue. Tobias lasted just a month or two before Navarro came into the frame.

Just over two years ago, Navarro was linked with Guns N’ Roses when rhythm guitarist Izzy Stradlin quit the band. Axl Rose has been outspoken in his praise of Navarro, but the guitarist wasn’t interested in joining the biggest rock ‘n’ roll band in the world. As Gilby Clarke  joined GN’R, Navarro just did his own thing.

Until Now. Navarro and the Chilis are currently in Hawaii writing new material for the much-anticipated follow-up to the multi-Platinum ‘Blood Sugar Sex Magik’.

God knows what kind of weird ‘n’ funky shit is gonna wind up on the next Chili Peppers record! But don’t hold your breath- the album isn’t due till 1995.