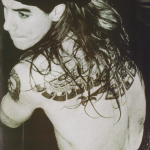 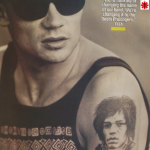 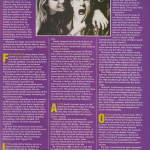 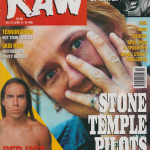 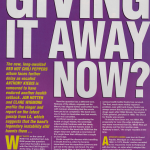 GIVING IT AWAY NOW?

The new, long-awaited RED HOT CHILI PEPPERS album faces further delay as vocalist ANTHONY KIEDIS is rumoured to have endured another health setback. JON HOTTEN and CLARE WIGMORE profile the singer and report on the latest gossip from LA, which suggests that the band’s legendary instability still haunts them …

WAY BACK on the cover of RAW 153, published last July, RAW posed the question: `Just what the hell is going on with Red Hot Chili Peppers?’ At the time, it was a light-hearted question. The Chilis had found a new guitarist, former Jane’s Addiction man Dave Navarro, to replace John Frusciante permanently, and they were about to travel to Hawaii to begin work on the follow-up to the mega-Platinum `BloodSugarSexMagik’ album. Everything looked fine and Funky for the central partnership of vocalist Anthony Kiedis and bassist Flea, the pair who had endured more or less everything during their rise to pre-eminence.

Now the question has a different tone. Release of the album, originally set for March, has slipped further and further back, with rumours abounding that the vocals have yet to be completed. The band were due to begin an Australian tour last month, which was cancelled.

Unofficial reports are questioning the health of singer Kiedis, the seemingly indestructible frontman with the steely, tattooed body and the livewire mind. A source close to the band told RAW that the singer may have suffered a recurrence of the jungle fever that afflicted him a couple of years ago.

Kiedis caught the disease while travelling in South America, when he became separated from his expedition partners and got lost in the dense rain forest. He was found a week later, in bad shape after having to forage alone for water and scraps of food. Malnourished, he had picked up one of the many virulent infections and fevers that inhabit one of the most wild and primitive places on Earth.

These ‘jungle fevers’ can lay dormant in the bloodstream for long periods before flaring up again. Malaria – which Kiedis does not have – is a particularly notorious example of the phenomenon.

This tropical disease is the second serious health battle Kiedis has survived. The first, much more widely reported problem, was with hard drugs. Kiedis has always sworn that he would not succumb to drugs again after Hillel Slovak, the original Chilis guitarist, perished in 1988. The shock for Kiedis was severe.

“It should have been me, not Hillel. My propensity for over-the-edge indulgences was more renowned than his. When Flea got the phone call his first reaction was, `Anthony’s dead’,” the singer recalled at the time.

ANTHONY KIEDIS was born in Grand Rapids, Michigan on 1 November 1962. In 1973, Kiedis’ mother acceded to his request to move to Hollywood with his father, an actor who’d adopted the stage name Blackie Dammett.

Dammett’s lifestyle was conducive to the fast lane, and a ‘like father like son’ scenario ensued. By the time Anthony was 12, he’d lost his virginity and smoked his first joint.

The pair would hit Hollywood hot spots dressed in matching pinstripe suits, Dammett making sure both were treated like royalty. Kiedis Junior once described his father’s passion for the fairer sex as: “This insatiable desire to meet all the beautiful girls in the world.”

Life with Blackie was the like living a cliché – sex, drugs and Rock ‘n’ Roll. Of course, the real Rock ‘n’ Roll in Kiedis’ life would come much later.

In 1977, Kiedis began his serious schooling at Fairfax High School, Hollywood and, despite a strong desire to be elsewhere, he attended without fail. Here, for a long time, his only friend was one Tony Sherr. Not only did the pair share first names, but also an appetite for anything wild and reckless. So when Anthony caught another boy, Michael Balzary, with his buddy in a head lock, he jumped to the rescue. The other boy, Balzary, was to become better known as the chameleon of hairstyles, Flea. Surprisingly, it was from this moment that the two became inseparable.

Adopting the stage name Cole Dammett, to associate himself with his father’s fame, Anthony won the role of Sylvester Stallone’s son in his latest movie, F.I.S.T..

FOLLOWING HIS acting debut, Kiedis waited to see whether he had created any ripples of interest within the movie industry (unlikely, considering that the film flopped). Meantime, he set about gaining the wildest reputation in school. And with the quirky Balzary as his new found partner-in-crime, it didn’t take long. The pair’s antics included scaling a giant billboard. Once at the top, they celebrated their conquest by waving, erm, certain parts of their anatomy at passers-by!

Their most regular and possibly most dangerous pastime was jumping off roofs into private swimming pools. On one occasion Kiedis missed and bounced off the concrete block into the pool, fracturing his back in the process.

It seemed that everything he did carried a health warning, even his first car. It looked like a regular car, drove like a regular car, but unlike a regular car, it didn’t have any brakes! According to Alain Johannes, then guitarist with Flea’s very first band, Anthym: “If Anthony had to go anywhere, he’d just drive from here to there without stopping for anything, red lights included. The amazing thing is, he never actually hit anything.”

By now, Flea had become firm friends with Hillel Slovak, drummer Jack Irons (now on the Pearl Jam time-keeping throne, having replaced Dave Abbruzzese) and Johannes in Anthym. Not surprisingly, Anthony was their biggest fan.

IT WAS while still at Fairfax, and as a massive Anthym fan, that Anthony discovered his flair for writing. In September 1980, he enrolled at the University of California to major in Political Science. His place in higher education was to last little longer than a year. He quickly decided that anything that you couldn’t learn from living life to the full wasn’t worth knowing.

The move into Anthym may have seemed an obvious one, given Kiedis’ predilection ‘or the stage, his good looks and his writing skills. But the break came in a roundabout way.

Kiedis stepped into the role of warm-up act for Anthym in the form of a stand-up comedian. It was a guise that came easily to the born extrovert.

Anthym changed their name to What Is This, which was more appropriate for the band’s ever-expanding growth into the realms of Funk. Soon after the change, Flea and Anthony were asked to do a kind of ‘freaky’ one-off stage show. The result was Tony Flow and the Miraculously Majestic Masters of Mayhem. The song the act played was ‘Out in LA’, and the audience’s response was overwhelming. The band were tripping on LSD, but that didn’t stop the audience from loving their performance.

The rest is history, with Anthony finding a new band name, Red Hot Chili Peppers, from ‘a Psychedelic bush that had band names on it’. The group took their first steps towards immortality by premiering their now-famous ‘socks on cocks’ routine at a LA strip club, the Kit Kat, ‘cos they were bored with being upstaged by strippers!

AS THE band’s success grew, so did Anthony and Hillel’s hunger for drugs. Unlike the early days of Anthym, when they had dabbled in various narcotics, they now had their own drug of choice – heroin.

This addiction was to become the inspiration for several Chili Peppers songs, including ‘Under The Bridge’. The track refers to a bridge in downtown LA where Anthony and a friend would go to score. A local Mafia-type gang who hung around by the bridge only accepted Anthony after his friend, who was close to the gang, assured them he was dating his sister. Later, Anthony looked back and referred to this as one of the lowest points in his life.

By Christmas 1986, unable to cope with his addiction and the pressures of touring, Anthony checked into a rehab clinic: “I’d found drugs had stopped being a good time. They were consuming too much of my life and becoming a negative influence instead of a mind-opening one,” he admitted.

MEANWHILE, HILLEL – whom the rest of the band claimed was much more ‘cunning in his disguise’ -was a full-blown heroin addict, despite the others’ attempts to drag him out of its clutches. Hillel’s addiction was also affecting his on-stage performance. One night he was so out of it that he played the same song for the entire set, while the rest of the band vainly tried to cover for him.

Finally, on 27 June 1988, the heroin won. Alone in his apartment after jacking up, Hillel slipped into a coma before dying. Three days later, his lonely body was discovered.

Reeling from the news of his friend’s death, Anthony was hit by a combination of grief and sheer terror at the thought that it could have been him now lying in a coffin, packed a bag and headed for Mexico. South of the border he spent a month living in a hut on a beach, doing anything that took his mind off Hillel’s death and the drug that caused it.

Back in LA, Flea, who had just buried one of his closest friends, didn’t know whether he’d ever see the other one again.

Precisely five weeks after Hillel’s death, and much to Flea’s relief, Anthony returned to the fray. After a suitable gap, they pulled in John Frusciante, a massive Peppers fan, and Chad Smith, who replaced Jack Irons. Irons had taken Hillel’s death extremely badly and his negative frame of mind was a major factor in his departure from the band.

The Chilis gradually began to clean up their act. The line-up looked solid, the live shows were shit-kickin’ and, by the time of the 1988 breakthrough album, ‘Mother’s Milk’, the band had moved onto the world stage.

However, controversy continued to dog the Chilis. Kiedis and Flea fought off sexual battery charges after alleged incidents on MN and at a live show. They went through guitarists at a rate of knots. Frusciante cut the ‘BloodSugar …’ album, then quit mid-tour, sick of the pressure. Arik Marshall and Jesse Tobias quickly came and went, before the arrival of Dave Navarro bought some much-needed stability.

OR SO it seemed, until recently. After a successful headlining appearance at Reading Festival last August, Navarro was rumoured to have quit the band to return to Deconstruction, his post-Jane’s Addiction project which also featured Addiction bassist Eric Avery. The rumours, though, were swiftly denied. Though a couple of rarity compilations, ‘Out In LA’ and ‘Plasma Shaft’, have emerged to keep the fire stoked, the possibilities of new material emerging in the near future seem remote.

The tour of Australia has been cancelled, and Kiedis’ rumoured ill health is another dose of hard luck that’s tough to swallow. The Rick Rubin-produced new Red Hot Chili Peppers album is now scheduled for a summer release. Flea’s joke name for the album, ‘The Doom Prolongers’, is starting to look more and more like a prediction. But then, Kiedis always did like to prove people wrong. Having come back from a major drug addiction and the jungle fever, you wouldn’t want to bet against him this time, either.