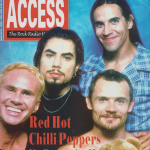 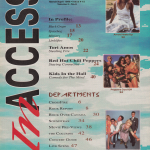 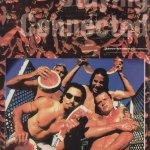 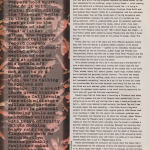 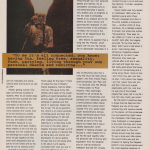 You’ve gotta hand it to `em, when the Red Hot Chili s they do it with style. Entertaining Peppers hold court, the `foreign” media in their home town just prior to the release of the band’ s latest album, the Peppers and a battalion of record company flacks have commandeered a whole section of one of LA’s storied show-biz hotels off Sunset Boulevard. Not a suite or a floor or even a wing. We’re talking bungalows and acreage. It’s one of those great vintage southern California inns with miniature villas and gardens and little personal swimming pools and uniformed waiters with trays of fruity drinks dodging bunny rabbits on a flagstone path on which Marilyn Monroe probably frolicked naked back in the 50s. It’ s that kind of hotel.

In one bungalow, a dozen music journalists from Asia, Mexico, Germany, Australia and various other exotic territories (like Canada) are sprawled in the living room receiving their first exposure to the new RHCP music blasting obnoxiously from the stereo.

The Peppers themselves are cavorting outside (surprisingly clothed, for the most part) and in the big bungalow opposite the media bunker. On the lawn separating the two buildings, singer Anthony Kiedis — who’s wearing flared red pants and a ridiculous over-sized bowler hat — is trying to gently coax a black rabbit from the shrubbery. Drummer Chad Smith and new guitarist Dave Navarro kibbitz for a photographer. And the notoriously nutty bass player they call Flea hangs back on the big bungalow’s patio, uncharacteristically subdued. He wears the look of a condemned man facing execution, which is understandable given his (perfectly legitimate) unfavourable disposition toward the media. (About which, more later.)

An alternative power to be reckoned with for more than a decade, the Red Hot Chili Peppers broke big with 1991′s Blood Sugar Sex Magik — a multi-million global seller stoked by typical Peppers fare like ‘Give It Away’ and ‘Suck My Kiss’ but also fueled by the unlikely hit single, ‘Under The Bridge’.

Finally, after four and a half years and three different guitarists, they’re back with One Hot Minute, a profanity-riddled collection of the band’s trademark muscular funk/rock — typified by the irresistible, frenzied lead track ‘Warped’ as well as emotional, quieter songs like ‘Friends’ and ‘Transcending’ (Flea’s heart-felt ode to dead friend River Phoenix) and the new flavours provided by ex-Jane’s Addiction guitarist Navarro (who tells me he initially did not want to join this band).

“It’s a bizarre concept for me to be in this band due to the fact that I’m from a dark place and I really enjoy making dark music,” says the man England’s New Music Express described as the coolest man in the world. (Thick, slicked, ebony hair, satanic goatee, nipple rings, multiple tattoos and a laid-back but genuinely friendly manner.) “This band has always been known for its, like, uplifting, wacky kind of cartoonish side. Which isn’t necessarily something I wanna be a part of and at times can make me uncomfortable. But the initial attraction was simply the fact that Flea and Chad are such talented, gifted, brilliant musicians. They’re like, I believe, the greatest rhythm section in the world. And the opportunity for me to play with guys like that was overwhelming.”

Navarro says that his initial fears of becoming a Flintstone have faded and, as time passes, the rest of the Peppers have realized that “I’m not willing to put on an Afro wig” and that that is okay. It looks as though this band — which once referred to itself as being ‘like Spinal Tap but it was the guitar player that kept exploding’ — has finally found a long-term solution to the dilemma created when original guitarist Hillel Slovak died of an overdose in 1988. (For the record, the in-between guitarists were John Frusciante, Arik Marshall and, for about ten minutes, Jesse Tobias.)

Kiedis says the Peppers were in pretty serious turmoil prior to the making of One Hot Minute which ultimately took the project in perhaps a gloomier direction than previous recordings. Between the revolving door on the guitar slot, exhaustion from the intense touring schedule behind Blood Sugar Sex Magik, Flea’s depression and the death of Phoenix (not to mention the omnipresent aura of the dark side of life recovering heroin addicts Kiedis and Navarro carry with them) it all adds up to one intense motherfucking vibe, to put it in Pepper-esque terms.

Kiedis acknowledges the confusion but shoots down the theory that it was exacerbated by the pressures of fame and big-time success brought on by Blood Sugar Sex Magik. “I don’t think so because we had confusion equal to this a year into our development, 13 years ago. That’s just the way  we are. I don’t think that quote-unquote ‘commercial success’ warped us K any more than we had been for years. We’re just warped in general.” And how’s this for a positive outlook: “I guess a lot of people wanna think that fame and fortune can make your life miserable and empty. But I think life can be miserable and empty without fame and fortune as well as with.”

Kiedis, getting cosmic now, says commercial success is “bullshit. After it’s all boiled away you’re left with yourself and with your friends and with your connection to God and the universe. And that’s so much more constant and truthful than all of the extraneous outside factors that people perceive as who you are based on their immediate exposure to you. None of that stuff really matters. What matters is the love that we exchange and the creativity that we exchange as a band. And when we get together all that other stuff disappears and we just try to be honest and do the best we can at making music.”

If all this is sounding a tad earnest, well — today at least —the athletic Peppers frontman is in a serious mood, though it breaks momentarily when I ask him what role producer Rick Rubin plays for the band. “I think he plays the role of Othello,” Kiedis deadpans. Dennis Miller, look out. This guy’s funny. But directly we’re back on the couch, getting all psychoanalytical and serious again. On songwriting as catharsis in general and this album in particular, Kiedis has this to say: “It’s all an exorcism, this record is an entire exorcism of feelings good and bad. And the overall feeling I’m left with after making this record and listening to it, is that there is life and love on the other side of tragedy. And even though a lot of people are going to interpret this as being dark and dismal and depressed, it’s about getting through that and still being alive to tell about it and staying connected with what you are in love with. Which for me are friends, family, music, life in general, nature”.

Kiedis bristles a little at the suggestion that the Peppers’ traditional good-time, sex and party mode may be giving way to a darker, more sober presentation. “To me it’s all connected, you know; having fun, feeling free, sexuality, funk, partying, living through your own personal deaths and rebirths. It’s all completely connected and to one-dimensionalize it seems very shallow and un-insightful to me. Our past is completely related to our present and to me there’s as much humour and good-natured revelation on this record as there is the admission of misery. It’s not one or the other, it’s all happening at the same time for us.”

Still, there’s no question that a song like ‘My Friends’, which opens with the line ‘My friends are so depressed’ resonates in a way (a disturbing way) that a romp like ‘Suck My Kiss’ simply doesn’t. And then there’s Flea’s anti-homophobic rant ‘Pea’ and — to conclude One Hot Minute — Flea’s paean to River Phoenix. Flea, seemingly reluctant to be cornered by people with microphones and cameras and notebooks, grants a brief audience before being pulled away for a photo shoot outside. The wiry, wacky bass player extraordinaire echoes Kiedis’ sentiments about there being dark forces and dark themes at work on the new album but insists that it was a healthy exploration which became “a healing process”, as he puts it, which helped him to get his life back together after the personal hell of divorce and separation from his daughter and an over-all emotional meltdown that left him virtually house-bound for a long period before the making of this album.

“All of my life I’ve been a pretty hectic, crazy, maniacal person, you know, with very high highs and very low lows,” he says. “I was stressing a lot just because of my own psychological makeup and I just kinda popped.” He says his story has a happy ending, though. He’s worked through a lot of stuff and has become “a kinder, sensitive, better man”.

Flea’s mettle was truly tested on Halloween 1993 when the talented young actor River Phoenix collapsed and died in his arms outside a Hollywood club — another victim of drug overdose. It’s a delicate subject to broach; but since he’s written ‘Transcending’, Flea says he can reflect on it now in a way he couldn’t right after the tragedy occurred. “At the time that he died I didn’t want to talk about it at all. I was having really obnoxious magazine people knocking on my door. It was ridiculous, they were like vultures after a kill and it was very sad and tragic. But now I feel really good about that song. I feel it’s an honest song and a loving song. When I think of him, I don’t think how sad I am that he died. I think about how happy I am that I spent time with him and that I had such a great relationship with him. And that he was one of the kindest people that I ever met in my life. I love him very much, you know.”

By this point it would be easy to forget that the Red Hot Chili Peppers are one of the most entertaining and raucous bands on the planet. All this contemplative soul-searching might leave the impression that these guys have mellowed or navel-gazed to the point that they don’t know how to have fun any more. But one quick listen to One Hot Minute should nuke that notion. To use a shop-worn 80s cliché, this record kicks ass and the prospect of seeing the Peppers perform it live should excite even the most skeptical observer of the band’s funk-metal fusion. And after an unfortunate delay due to drummer Chad Smith’s arm injury, they’re finally out there blowing the roofs off North American concert venues.