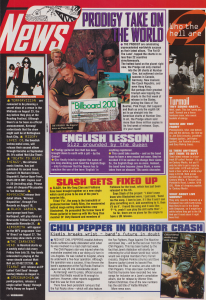 The Chili Peppers star was injured when his motorbike crashed into a car doing a U-turn in Los Angeles. He was rushed to hospital, where he underwent a five-hour operation. Although the operation was a success, it has thrown the band’s appearance at the Fuji Rocks Festival in Japan on July 26 into considerable doubt.

As Kerrang! went to press, official sources insisted that Kiedis would be fit enough to perform. However, other reports suggested that this is far from certain.

There have been persistent rumours that the Fuji Rocks Show- which will also feature the Foo Fighters, Rage Against The Machine and Green Day- will be the last ever from the Chili Peppers. This has been fuelled by the fact that Jane’s Addiction will shortly be reforming for a full-blown world tour, which would see original members Perry Farrell (vocals), Stephen Perkins (drums) and Dave Navarro (guitar) joined by bassist Flea. Navarro and Flea, of course, are also with the Chili Peppers. It has been confirmed that this foursome have recorded two new songs for inclusion on a Jane’s compilation album, due for release by Warner Bros before Christmas. One of the new numbers has the odd title of ‘Kettle Whistle’!