Anthony is on the cover of the magazine but the articles are about RHCP’s performance to open the new HMV store in Toronto, Canada… and about Flea’s underpants! 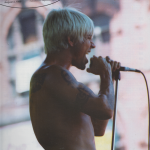 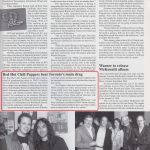 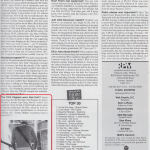 The Red Hot Chili Peppers brought their unique brand of grandstanding
music to HMV’s flagship store in downtown Toronto on July 22. The crowd was
so large it was necessary to close down the main artery from Dundas Street to
Gerard Street for the band’s afternoon performance that ran for almost two
hours, and without incident. However, and it couldn’t be construed as an incident,
Warner’s promo rep Greg Morris had to purchase five fives of Haynes underwear
for Flea, for obvious reasons (see page 4). Unfortunately for Woodstock fans he
dropped the underwear motif and bared it all.

Apparently the pair experienced some difficulty entering Canada and had some choice expletives for the immigration/customs people before they dug into the music.

The Peppers’ date also signalled the launch of HMV’s brand new fully transactional website that began featuring digital performances of the event which began at 11 am, a live performance of Scar Tissue and an interview with the band was archived for the future.

“What a great way to launch HMV.com,” said Peter Luckhurst, president of HMV North America. “We are absolutely thrilled to have one of the world’s most exciting bands with us live online.”

The Chili Peppers were Red Hot!!!

Never knowing what the Red Hot Chili Peppers are about, Warner’s promo rep Greg Morris wasn’t too surprised when he had to fetch half-a-dozen pairs of Haynes underwear for Flea, which he wore onstage at the band’s performance in downtown Toronto, (EC: Tommy Hilfiger would have been a better fit!!!)