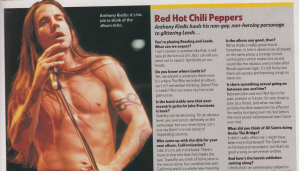 You’re  playing Reading and Leeds. What can we expect?

I can’t answer a question like that, it will take all of the  fun out of it. But I can tell you what not to expect: lightbulbs on our heads.

Do you know  where Leeds is?

Yes, we played a university there once. It’s where The Who  recorded an album, isn’t it? I remember thinking, Damn! This is Leeds?! But not  every city has to be glamorous.

Is the band  stable now that your eccentric guitarist John Frusciante is back?

Stability can be deceiving. On an obvious level, yes,  everyone’s definitely on the same page, but you never know. Let’s just say  there’s no real sense of impending calamity.

Who came up  with the title for your new album Californication?

I did, it’s my job in the band. There’s more to the title  than first meets the eye. Typically you think of fornication in the sexual  sense, but combine that with California and it’s a whole new meaning.

The effect that California has on the rest of the world  culturally. It’s both beautiful and ugly. Everywhere on the planet you see the  influence of California.

Is the  album any good, then?

We’ve made a really good record. Somehow, in John’s absence  we all stayed on the same plane, a strange cosmic continuation which makes this  record sound like the obvious one to make after Bloodsugarsexmagik. It’s still  funky but there are spooky and haunting songs on there too.

Is there  something sexual going on between you and him?

Between John and me? No! Not in the past, present or future. I’m  very close to John as a friend and when we take pictures he often expresses his  affection for me by slumping over me, but John is the most purely heterosexual  man I have ever met.

What did  you think of All Saints doing Under The Bridge?

It didn’t really affect me. I might have been more impressed  if The Clash had re-formed and recorded it, but that’s as good a song as  we have ever written.

And how’s the heroin addiction  coming along?

I think that’s an unnecessary subject to discuss in a music  interview. For me today, I’m not interested or in need of any mind-altering  substance, heroin or anything else. I’m just dealing with today. 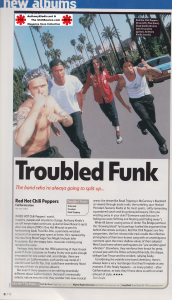 The band who’re always going to spilt up…

Perhaps they feel that the 1984 patenting of their thrash punk/P-Funk crossover on Freaky Styley was quite enough innovation for one career and, accordingly, there are moments on Californication, such as the rap metal of I Like Dirt and Get On Top, that could have seamlessly fitted into any of their six previous albums.

But even if there appears to be nothing essentially different about Californication, the band’s intrinsically eclectic nature ensures that they wander into new musical areas: the dreamlike Road Tripping is McCartney’s Blackbird as viewed through acid trails; the tumbling, jazz-flecked Porcelain features Kiedis at his most poetic, softly lamenting squandered youth and drug-decayed beauty (“Are you wasting away in your skin?/Someone said you’re fading too soon/Drifting and floating and fading away”).

While All Saints’ cooing Xerox of Under The Bridge (without the “drawing blood” lyric) perhaps fuelled the argument that behind the tattoos and pecs, Red Hot Chili Peppers are fine songwriters, the five-minute title track recalls the reflective atmosphere of their best-known song with an unambiguous comment upon the more shallow values of their adopted West Coast home where earthquakes are “just another good vibration”. Elsewhere, they reinforce their knack for great, unusual; pop with the Police-echoing Otherside, the skippy, oblique Scar Tissue and the strident, rallying Easily.

Considering the volatile intra-band chemistry there’s always been a very real danger that they’ll implode at any moment. If this finally happens-as many predict- after Californication, at least they’ll have done so with no small amount of style. ***

Advert in the same magazine for Californication: 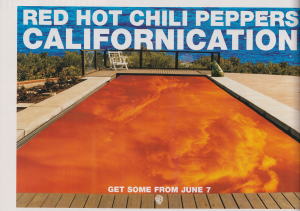