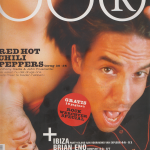 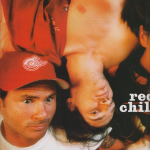 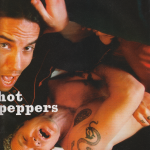 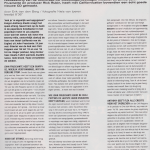 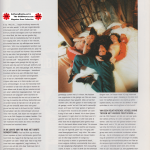 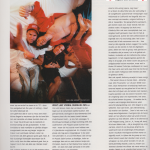 We admit: A headline like ‘ The Red Hot Chili Peppers are back’ has a very amusing deja-vu like quality to it. But in contrary to then (1995 and the fiasco One Hot Minute) now there is truly something going on: the Chili Peppers are back. The successful line-up of the break through album BloodSugarSexMagik, including ex-junkie John Frusciante and producer Rick Rubin, made a really great new album with Californication.

“Have you really eaten it?” singer Anthony Kiedis asks semi strictly. Next to him on the couch in a very impressive hotel room in Los Angeles (for those who want to know: hotel Beverly Hills, immortal thanks to the cover of Hotel California of the Eagles) sits John Frusciante. 29 Years old. Guitarist of the Red Hot Chili Peppers in ’88 till ’92 and ’98 till now. Skinny posture, long dark hair, Bowie-T-shirt (period Aladdin Sane), red trousers. Two different socks.

John Frusciante has a funny, difficult to understand and childish voice. Donald Duck with one drink too many. Not a voice to say serious and profound things with. But he does. If we look back to the turbulent, heavy and sometimes insane time the Chili Peppers went through in the ’90s we wonder what kept the band together all these years, John sweeps those external appearances off the table. ‘The real fights take place in your head. And in your relationship with the outside world. All of that outweighs keeping the band together. Such a band… You have to look at it as a sort of blessing at the end of a journey, if you, after years of troubles and doubts, find yourself balanced, usually you are still standing. At least if the band members are strong enough.’ In a while he will contradict himself when he talks about his sudden departure from the Chili Peppers in ’92.

But that’s later on. First we go back to the question if John really ate it. What? That pastrami-sandwich that Anthony brought him while he was in rehab. ‘Yes I did, I really appreciated it.’ He saw it as a small, caring gesture that proved that the Chili Peppers-singer still loved him. The years before that were a bit different. After John’s abrupt and ill-timed departure, at the eve of a prestigious tour with Lollapalooza ’92 as a main act Anthony and John had not had any contact with each other. It wasn’t any different before that. “Of all personal understandings in the band the one between Anthony and I was the worst,” says John. “Our friendship had already reached an all time low before BloodSugarSexMagik. When I left the band we hadn’t spoken to each other in months. That situation was one of the reasons for me to leave the band. If friendships within the band do not have any more growth, the band doesn’t have any growth either. And if there is no form of comradeship you can just stop being a band. I’m convinced of that. And that’s what bothered me at that time. I noticed that we were just moving along to the success of BloodSugar and only did things that made us money. And on top of all that the friendship between Flea and I wasn’t going well. We still cared about each other but mentally we were on different wavelengths. Flea was having personal problems and I.. I was happy, but had locked myself up in my own world… You know what I mean.”

Those that followed John Frusciante and/or the Chili Peppers these last few years, know what he means with his own world: drug hell. After John left the band, he sunk into a deep black hole above which he hung his days with the Peppers. VPRO’s Bram van Splunteren visited him at home in ’94 and made a moving and shocking TV-reportage: we saw a sad, worn-out and nervous  human being that was talking gibberish, but in clear moments he spoke frankly about ideals gone by, his musical example David Bowie, his depressions and, if there were any, the motives for his heroin use.

The year after that his first solo album, Niandra Lades And Usually Just A T-Shirt, was released. The record contained 24 bizarre songs and got mixed reviews, Some found the album one of the worst they had heard in ages, some thought of it as the awakening of a musical genius. The second Frusciante-CD was barely noticed outside of the United States. Shortly after this he retreated from the music scene and it seemed that he hadn’t played or even touched a guitar for a long time. He has never heard One Hot Minute, the somewhat unsuccessful ‘comeback-CD’ that his former band members made in ’95 with guitarist Dave Navarro (ex-Jane’s Addiction who’s been active as a solo artist recently with the multimedia project Spread Entertainment). John refers to his long-time drug use as the years of imbalance. Even when he is asked to try to explain how he experienced those years, the word balance is mentioned frequently. “I loved and still love drugs, but as a human being you have to apply balance to what you give and take. You’re constantly busy taking things, but you never give anything back to the outside world. Well, not anything beautiful anyway. For a long time I was still at peace with that situation, because I thought that I was giving enough with my music and that it was time that what was in me got some attention and recognition. When I left the band I decided to focus on myself. Drugs are very good for that. Luckily I found out that I was out of balance in time.” Anthony nods. “That’s a good way of looking at it.”