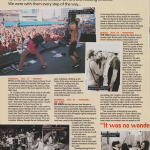 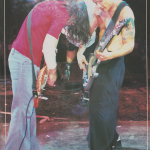 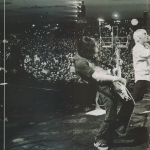 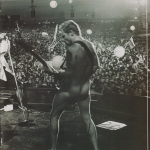 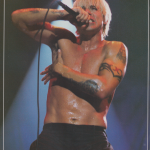 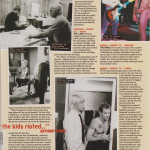 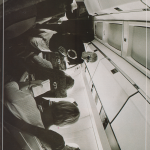 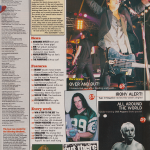 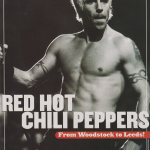 In the space of a month, the RED HOT CHILI PEPPERS travelled from Toronto to Woodstock, Moscow to Paris and Reading to Leeds. We were with them every step of the way…

IT’S A cool 80 degrees in the shade on Young Street in downtown Toronto. The Red Hot Chili Peppers are here to play an afternoon gig on the street. A stage has been constructed in the road, opposite the city’s HMV store.

At 12.30pm, police seal off the street to all traffic and the huge crowd that has been waiting in an adjoining side street are let into the main road. People climb on every vantage point to get a good view — from street signs to the multi-storey car park two streets away.

The band leave their air-conditioned bus at 1.15pm and take a short walk to the stage. By now, estimates of the size of the crowd range from 8,000 to 10,000. As soon as the Chills launch into ‘Emit Remmus’, bodies begin pouring over the pit barrier at the front of the stage. By the time they unleash a frantic ‘Give It Away’, the scene is bedlam. Midway through the set. Anthony Kiedis goes walkabout, climbing up the frame of the stage and onto its roof. Forty-five minutes later, the Chills leave to a thunderous response. Much Music, Canada’s answer to MTV, hosts a meet-and-greet with fans afterwards, which is predictably packed.

WE MAKE the short journey from Toronto to Syracuse by plane. There are a few double-takes in the airport as fans spot Kiedis, Flea, John Frusciante and Chad Smith at the check-in. They spend most of the time before take-off happily signing autographs and posing for pictures. The hotel in Syracuse which the band are using as their base camp for the Woodstock Festival is straight out of ‘The Shining’, complete with haunted ballroom. Most of the other bands on the Woodstock bill are here too, so the bar is wall-to-wall with stars.

The Chilis have a day to kill before they actually play Woodstock. How do they cope with the monotony of being on the road?

“Keeping moving breaks it up to some degree,” says Kiedis. “In Europe, for instance, going from Vienna to Denmark breaks the monotony, because for a little while your senses are stimulated by the new culture, language and food. But in Germany, there is no breaking the monotony, I swear to God! Bless those people for living there.

“My least favourite thing about touring would be being by myself in a hotel room in Germany. That is about as depressing as a man’s life could be. My favourite thing? Just being lucky enough to be doing exactly what God put me here to do, with friends.”

THE CHILI Peppers are closing the whole show on Sunday night. By this point in the weekend, reports of fans running riot during various bands’ sets —most notably Limp Bizkit’s — are already rife. The Chilis spend an hour fielding questions from TV and press about how they’re going to top their appearance at Woodstock ’94, when they played with huge light bulbs on their heads. “Just by playing a great show,” becomes their stock reply.

However, just as they’re about to go on, Flea decides he’d rather like to perform naked in front of 250,000 people. The set itself is the undoubted highlight of the festival: kicking off with a rampant ‘Around The World’ and concluding with a mighty cover of Jimi Hendrix’s ‘Fire’, the Chilis steal the whole show. But during the most magical moment — when candles are handed out during ‘Under The Bridge’ and the site becomes a sea of light — the first fire is spotted on the horizon. Long after the Chilis have left the stage, Woodstock ends in carnage.

“Our perspective of Woodstock was pretty different from other people’s,” Kiedis reflects later, “because we pulled up about an hour before we played and were driven to some remote dressing room, which was nowhere near the people or the stage. It was like some abstract concept of the show.

“When thousands of yards away we saw these huge plumes of fire we just thought, ‘Oh, this is like Lollapalooza – no big deal’. We come offstage feeling good, and these guys start telling me I’ve got to go back out there and make people stop the fire. How? I did tell the crowd to be nice to the fire department and let them do their job.

“When we got back to Manhattan, I called my girlfriend and went to bed. I got up the next day, opened a newspaper and read that Woodstock was a riot. I didn’t get it, because what I saw was a normal festival crowd. Later, I found out that the promoters had being over-charging the kids for food and water, taking their own food and water off them when they came onto the site, and basically exploiting the kids. It was no wander they rioted – they deserve to riot.

“Then I started hearing nasty rumours about girls being molested and raped. I can only hope that they were rumours. If that did happen, someone’s got to come up with a new way of putting on festivals so it never happens again.”

TO MARK the launch of MTV in Russia, the Chili Peppers are invited to play a free gig in Red Square. The organisers anticipate a crowd of 90,000. In the event, more than 300,000 people show up. “I found Russia incredible, but very sad and repressed,” says Kiedis the following week. “It’s as if the ghost of Stalin is still haunting millions of people in the country. It made me feel ill to breathe the air in Russia for as many days as I did.

“Playing the show was a dream and an amazing experience. Red Square was one of the most beautiful places I’ve been, but I found it difficult to be there – it weighed heavy on me. The people are beautiful and very soulful, though. They deal with adversity all the time and they make us all look like spoilt brats.”

THE 7,000 tickets for tonight’s show at Le Zenith -which, given its dungeon-like atmosphere, should be re-named Le Bastille – sold out months ago. With Paris, currently in the grip of a heat wave, condensation is dripping off the walls long before the Chilis take the stage.

They deliver one of their most spontaneous sets of the tour – slipping snatches of The Clash’s ‘London Calling’ and ‘Guns Of Brixton’ into ‘Right On Time’. At the end of the encores, the crowd refuse to leave. After a 12-minute wait and while the crew are packing away, the band re-appear and run through AC/DC’s ‘Back In Black’ (complete with Brian Johnson-style vocals from Kiedis) and Hendrix’s ‘Fire’.

THE BAND arrive on site at 8.30pm. Flea’s mother has bought his daughter Clara over to see the show. ‘Californication’ producer Rick Rubin is here with Sporty Spice in tow. The band head straight for their dressing room, which is decked out with scented candles, joss-sticks and wall drapes. They only emerge to play a blinder of a show, which goes down the proverbial storm.

IT’S A cold, damp and grey day in Leeds. The band stop for fish and chips en route to the site. Their set is less climactic than the one at Reading and played to a smaller crowd. The biggest cheers of the day are reserved for Flea, who informs the crowd that his grandfather came from Leeds and then removes his sarong to go naked once more.

A common perception of the Chilis is that they hate coming to the UK. How did they feel about the Reading/Leeds weekend?

“When we first came to England, we played Dingwalls in London to 47 people and it was part of our thing to be anti-British.’ says Kiedis.”It was fun to wind you up. British people seem to take themselves so seriously, so we took it upon ourselves to give you a little ribbing. But since ’84, my affection for England has grown consistently by micro-fractions. It’s not really amounted to anything yet, but I like being in London. Playing Reading was a gas. Being cold and wet in the middle of Leeds? I don’t know…”

And a final thought?

“I still love playing these shows. It’s just an amazing experience. l never forget how lucky we are to all be back together again.”