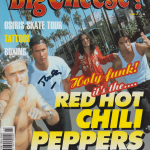 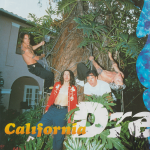 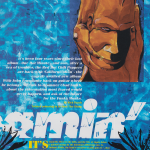 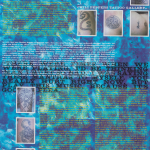 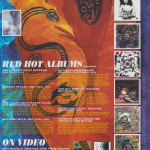 Please note: the poor quality of the text on the main article page is not as a result of the scan copy; the actual magazine actually looks like this! Small white & tiny gold font overlaid on a multi-hued blue background with yes, white and gold flecks in it- not to mention the ‘background’ text quotes too!  It was bordering on the illegible; a transcript
is provided below of the article so that people can read it

It’s been four years since their last album- One Hot Minute-and now, after a sea of troubles, the Red Hot Chili Peppers are back with ‘Californication’- the eagerly awaited new album. With John Frusciante back on guitar where he belongs, we talk to drummer Chad Smith, about the reformation most feared would never happen, and ask of the future for the Funky Monks.

It’s 11 am-ish. We’re in the hills, and the City of Angels below is painted orange by the morning California sun, as Anthony Kiedis, the band’s evocative vocalist puts it: “… How people dream of this weird, magical place that is really kind of the end of the world, the Western Hemisphere’s last stop.” How right he is. We were in awe. But LA’s changed a lot in the last two decades that Anthony has been writing music. The verve has swerved: the hot-pot of artistic zeal has cooled a little; there’s more polish. Or at least that’s how it seemed. Something that was maybe reflected in the bands last album: 1995’s, One Hot Minute- a cleaner, more refined sound abetted by the layered guitar samples of Jane’s Addiction guitarist, Dave Navarro.

But we were at Chad’s, and John Frusciante-our god for many years-was back in the band. We were happy. Chad too was sanguine, easing himself into the day…in his indoor pool. And Hot-Dang! There was a gorgeous young lady in there with him. Rock and Roll! Well, actually her name is Manon and she’s Chad’s little girl. A far cry from the dirty filth-monger he used to be. I told him. He laughs comfortable with that reputation now, as a father. I tell him of Toby, the most perverted of our chimps, and quiz him on the ‘sofa and spatula’ story.

“Oh yeah. Everyone’s always asking me about that. Some French journalist asked me that in Paris.” He laughs loudly. “It was after a sound check somewhere. I had gone back to the hotel and these two girls came back with me.” Chad gazes around the pool-house ceiling as he explains with as little detail as he thinks he can get away with. Still stoked on the fact I was talking to THE Chad Smith of the Red Hot Chili Peppers, my wits were as sharp as cream cheese and I didn’t question. “See, one of these chicks said she liked being spanked, oh yeah we were in an apartment room with a kitchen an’ all, right? So I go looking in the drawers for something to spank her with, figured it was kinkier than just using my hand. Anyway, I found this spatula in the kitchen and, you know, spanked her with it on the sofa. She seemed to like it.” Well, I was hoping for more than that, but… “Oh yeah” Chad blurts. “Then they decide they want to have an oral sex contest on me, but they can’t decide who’s gonna go first. So I find a couple of straws and let one of them pick the short straw. Heh heh!” OK, that’s more like it, I guess. “But I was rooming with Flea at the time, you should’ve seen his face when he walked in and saw the two contestants and me on the couch, with the spatula and the straws on the table.” To help me with the visualisation, Chad describes how big one of the girl’s tits were. “She could catch a tennis shoe under her breast.” A tennis shoe? “a goddamn tennis shoe!”

So with Chad now floating happily in domestic bliss, does this mean that the Chilis have now mellowed with age? Not really. Not when you listen to the album and find the first couple of tracks taking you right back to BloodSugarSexMagik and even Mothers Milk: Flea’s frantic bass, the whip-cracking drumming of Chad and the inimitable chicken-peck funk of John’s guitar, make ‘Around the World’ a fitting aperitif to the rest of the album. ‘Get On Top’ just couldn’t be by any other band in the world and oozes with organic, fast, funky bass-slapping energy- true Sex-Funk. Anthony’s endless love affair with Hollywood, his home, continues on the title track, ‘Californication’- a sunny melodic look at the profound influence of Hollywood and California. ‘Road Tripping’ is an acoustic camp fire ditty about a Big Sur surf trip. You would not be wrong in pointing out that there are a fair share of slower melodic tunes here. Sure. But they are certainly not slower-for-the-commercial-market, slower.  These are poems and they are as natural and unforced as the band’s relationship with each other. Backed up by pumping rock-out tracks like ‘Emit Remmus’ (Summer Time) and ‘I Like Dirt’ the latter harking back to a time of Uplift Mofo party Plan and ‘Right On Time reminding me of Hillel Slovak’s raucous fresh funk: this is an audacious ensemble of everything the Chili Peppers are and ever were to me. This is the album we had been waiting for.

The band suffered most of the text book rock ‘n’ roll troubles during the period of John’s absence: Motorcycle accidents (Chad and Anthony). Painful broken relationships (Flea) and of course, Heroin addiction (John’s). 3 guitarists came and went, one stopping long enough to make the last album, One Hot Minute. The slipper, however, fit none of them.

For John, the pressure from the success of BloodSugarSexMagik almost overnight was too much for him; he was only 19 years old. When he left the band practically on the eve of Lollapalooza, he also left Anthony very hurt and disappointed, beginning a rift between them. It was two years before they saw each other again- Anthony visited John in rehab. He got into drugs: Heroin. And it was good for a while. Chad tells me, “it seemed to work for him, but of course, as always with drugs, it didn’t last and it got bad.” Now having been cleaner for longer than Anthony himself, John’s better equipped to deal with his Godly status, but the pain and tribulations of the past few years show on his face and pulse from his guitar. I remind Chad of the BloodSugarSexMagik tour, in particular, the Brixton Academy gig of 1992- our first in-the-flesh Chili Pepper experience. John was young and incredible and teasing each perfect note from his black Strat just a few feet from us.  Flea was ill that night, flu or something. During the chorus of a track, I can’t remember which, he threw up on the stage, without missing a note. Chad didn’t remember but wasn’t surprised, “Oh yeah, Flea does that, he’s amazing. He could play a song while spewing I’m sure. Flea can puke and rock!”

So exactly what elaborate, unwittingly inter-connected circumstances came about in order for this fated reunion to happen? “Flea called me up and said, ‘Chad I’m at John’s. Why don’t you come over?’ So I did.” Oh, that simple, eh? “Flea had been jamming with John for about three months in John’s garage and we started to make music together again and it was good.” Flea then asked Anthony how he felt about playing with John again. Anthony was concerned the energy couldn’t work together like before, or could it? His fears were unfounded and Anthony felt levitated from the first time they played together. “We all know not to project how many years this thing is going to work. Right now it’s working like crazy”- Kiedis. The basic tracks for the album were done three weeks later and Anthony was happily struggling to get the lyrics written and keep up with the steady flow of tunes the others were pouring out.

There was a point last year when Flea became so distraught with the stagnation of the band’s career, that he was set to give up and continue with his solo album, a reluctant contingency. Both Chad and Flea had worked very hard through the ‘year of nothing’ to keep the band afloat, but with Flea’s own personal relationship troubles taking their toll on him, dark days scratched at his soul and he had to make music again. He started playing with John again, in John’s garage. Therapy indeed. “There were times when we were playing I’d be thinking ‘Man I hurt so bad.’ I was just saying these mantras to myself. ‘You really hurt right now. But play this music, because it’s good.” Flea

With Rick Rubin working his magic on this, his third album with the band, the chemistry is perfect and the reaction has again created the true essence of what we’ve come to understand of the Chili Peppers: Emotive, heartfelt lyrics of love, loss and brotherly regard: Pulsating organic sound, unenforced and unfeigned. This album, to any fan, is simply the next chapter in the story of the band: The colourful recent history, the pain and the gain. ‘Californication’ captures the raw and pent up energy that has laid dormant for so long, but it’s not a ‘Freaky Styley’ energy or an ‘Uplift Mofo Party Plan’ energy. The band are older, wiser, with a lot more feeling to convey, both dark and congenial. I too, as a fan, am older and wiser and find this album a natural evolution in the course of the Red Hot Chili Peppers. ‘Californication’ is a record that can appreciate a fine wine as much as a six-pack of Mickey’s. A record that would enjoy a sunset with close company and yet be the life and soul of a wild house-party.  This is an intelligent and dare I say sophisticated album, but this IS the Chili Peppers and jumping around to the soulful bass-lines and standing in a low slung stance, playing air guitar, mimicking John’s blissfully pure, adept riffs, is as much as part of the experience as it ever was.

Whether you are a fan or not, this is an album everyone can find solace in, ‘even on your heaviest days’. This summer the boys will be in the UK for a number of gigs and if you are doing the festivals, then you might catch them at either Reading or Woodstock. But if you’re only travelling as far as your record store, then make damn sure you add this, the long awaited sixth album, to your collection. I think the time has come for another tattoo, The Red Hot Chili Peppers, we salute you. Welcome back.

[The text size & colour used on the background of this magazine make it virtually unreadable and as I was really struggling with it so I’ve left the final page which is just a description of RHCP albums and videos; the whole of the aactual article has been typed out.]