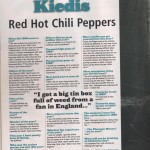 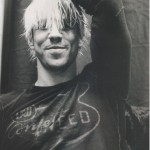 Thank you to Rita Bussetta for the transcript.

“1999 was actually not profound for me simply because it was 1999. It just happened to be the year that we recorded ‘Californication’, so the experience of being in a creative environment with John (Frusciante, guitar) again after a long, long time made me realise that that was where I wanted to be, and that’s who I wanted to make music with. My girlfriend blossomed like a f**king flower from Heaven, and I moved house.”

Album of the year?

“My album of 1999? I don’t know if it came out this year, but I can tell you one that I discovered in 1999 and it became my favourite record. It was by Blonde Redhead (‘In Expression Of The Inexpressible’, released in 1998 – Ed) – they’re a band out of Washington DC. They’re two Italian guys who are in the whole Dischord circle. It’s a beautiful record.”

Film of the year?

“I would definitely say ‘American Beauty’ with Kevin Spacey.”

Person of the year?

Wanker of the year?

“That’s a tough one. Probably (Oasis singer) Liam Gallagher, just from the pictures I’ve seen of him in London – especially the whole ‘Saint Liam’ thing.”

This year I have mostly been drinking…

Who was the sexiest person you met this year?

“My girlfriend, by far.”

Who was the biggest tosser you met this year?

“Well, there was this guy who was trying to sell me drugs in the street in Amsterdam. I made a joke about it. I said, ‘Unless you’ve got, like, a wheelbarrow full, don’t even ask me, cos you haven’t got enough’. I was joking, but he looked at me like he wanted to kill me.”

Where did you go on holiday this year?

“I went on holiday to an island in the Caribbean with my girlfriend.”