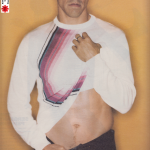 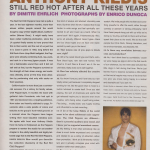 Thank you to Sally Sturman for typing the transcript.

STILL RED HOT AFTER ALL THESE YEARS

The Red Hot Chili Peppers have had quite a year.  In the last eighteen months, more than eleven million people around the world bought a copy of their eighth album, Californication (Warner Bros).  It might easily have been called California-vindication, since the LA quartet finally seems to have proved that this is their world, and the rest of us just live in it.  Case in point:  In 1983, long before the Kid Rock-Korn-Limp Bizkit zeitgeist, the Peppers were already combining funk, rap, punk and rock in a four-way jigsaw puzzle.  It was not a fashionable sound then and it did not sell well at first, but the Peppers survived on the strength of their sheer energy and cockiness (literally, since at first they drew attention by performing clad only with socks on their weenies).

Californication is more than just a commercial success:  It’s a victory for family values, Chili Pepper-style.  It reunites the band with guitarist John Frusciante, who had quit in 1997 and devolved into a crippling addiction.  Now sober and heavily addicted to yoga, Frusciante adds a wide palette of colours and textures to the group’s funk-metal grooves at a moment when the Peppers have begun writing their most beautiful melodies ever.  We spoke with front man Anthony Kiedis from his home in Hollywood, as the Peppers prepare to re-enter the studio for yet another chapter in the oddly beautiful and highly tattooed saga that is the Red Hot Chili Peppers.

DIMITRI EHRLICH:  How would you describe the collective chemistry of the Red Hot Chili Peppers?

ANTHONY KIEDIS:  Chemistry is beautiful and important to any musical endeavour, and it’s also impossible to figure out or force it.  And the first time we came together with John Frusciante, that kind of elusive and abstract chemistry was there.  But then when he left, I realized that it was harder to write songs and feel spiritually connected to art and music as a band.  When he came back I felt it again, instantaneously.  Also, we’re all actually different blood types – there are four blood types and we have one represented by each guy in the band.

DE:  That means one of you guys is kinda rare, right?

AK: AB is the rarest blood type and that’s John.  Rare blood type, rare rare rare human.  And Chad is O and Flea is B and I am A.  So our chemistry really does work well together.

DE:  How has sobriety affected the creative process?

AK: You know I love pot, and I love beer, but I am totally sober, just because it completely stopped working for me.  But the good news is music is a built-in lubricant to create itself.  Once you start playing, the sort of chemicals and spirits that get released inspire you to become even more creative.  John being sober, myself being sober, Flea being… mostly sober, was hugely exciting and influential to our last recording.

DE:  A lot of the Limp Bizkits of the world seem to be about adolescent male aggression.  The Chili Peppers are different – there’s a peaceful quality in your sound, and I know you‘ve supported non-violent causes.

AK:  My feeling is that what somebody like us does is much better expressed and conveyed and related to as a policy of attraction rather than promotion.  I think art is inherently non-violent and it actually occupies your mind with creation rather than destruction.

DE:  You guys have been creating in a new medium recently, on the internet, with RedHot.Z.com.

AK: Right, it’s like creating a (TV) station from scratch.  We invite people who feel have something powerful to offer the world, either through comedy or activism or strong philosophy.  We’ll have these people hang out with us while we’re doing our touring, and talk to them and let them speak their piece to the world.  We did that with people like Chris Rock, Woody Harrelson, and the environmentalist Julia Butterfly Hill.

DE:  Is there any correlation between success and satisfaction?

AK:  No, I don’t think there’s a correlation, ‘cause we were happy as pigs in shit in the first month of our existence, but we were also tortured like little dogs in hell during that time.  We’ve just learned how to balance ourselves a little better so that we’re happier way more of the time than not, and you know, being happy is a radical and desirable act if you ask me.