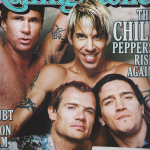 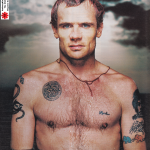 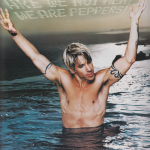 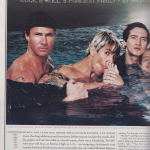 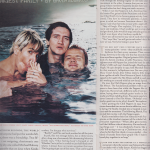 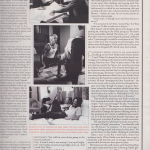 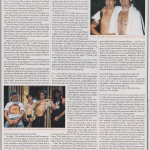 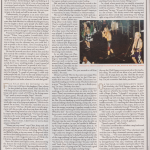 Note: The magazine was slightly larger than the scanner so I’m sorry that some of the edges are missing on the photos; two scans have been merged on the text pages to capture it all with an extra scan for the middle of pages 3-4.

We now have the Spanish version of this: Rolling Stone May 2000

TWENTY-TWO YEARS AGO, before the platinum records, the world tours, the drug addictions and overdoses, before anyone had put the words chili, hot, peppers and red into order as a band’s name, there was a friend ship.
Two 15-year-old boys at Fairfax High in LA – an outgoing, charismatic one named Anthony Kiedis and a short, terminally shy one called Michael Balzary but better known to you and me as Flea – became so inseparable that on days when Kiedis didn’t show up, Flea would just walk the school grounds by himself. “I’d circle around,” he says. “I didn’t want anyone to see that I was all alone.” One of the first things Kiedis told Flea – while they were getting stoned on a bus taking them to Mammoth Mountain for a ski trip – was that he was a survivor. Kiedis said, “If a planecrashes, I’m the guy who survives.” “Really?” said Flea and took another hit off the joint. In part, this was teenage hubris, but at 37, after a long run of extremely life-threatening behaviour, Kiedis says, “That feeling hasn’t changed at all. Whether I’m in jail or in a rehab or just half-dead somewhere, I always have an innate sensation that says, ‘You’re going to get out of this mess,’ That can be a good thing or a load thing; it gives you carte blanche to explore areas you have no business going into.” The Red Hot Chili Peppers have survived across 17 years and seven albums, enduring personnel turnovers and crises that would have ended three lesser bands. Their latest record, Californication, is not only a triple-platinum hit, it’s their finest sustained work ever.
What does it mean to be a Chili Pepper in the year 2000? It means that you still play party funk with more bounce to the ounce than any other rock band but have dramatically expanded your sonic palette. It means that, improbably, you have matured from a half-naked, out-of-control Young Turk into a half-naked elder statesman. It means that you can walk through life holding tragedy in one hand and merriment in the other. It means that you are in a group whose members frequently declare their love for each other but don’t hang out much anymore. When I visit the Peppers in LA, frontman Kiedis, bassist Flea, guitarist John Frusciante and drummer Chad Smith try to choose a group activity I can attend. They have no rehearsals planned; a Lakers game is ruled out because Frusciante doesn’t like sports. I ask what they’d do on tour with a night off. They all laugh. Flea explains, “I’d stay in my room and meditate, Chad would go out to strip clubs and get drunk, John would do yoga and play guitar, and I don’t even know what Anthony would do.” Have you all learned to stay out of each other’s hair? “No,” says Flea, “we still get in each other’s hair. But now we say, ‘Sorry for being in your hair.’”
The Red Hot Chili Peppers have had so many guitarists- seven – they could hold a reunion barbecue for them every summer. Their current lineup, however, is the only one that has recorded more than one album together. Original guitarist Hillel Slovak died of a heroin overdose in 1988. Frusciante, then an 18-year-old Peppers fan, joined the band for 1989′s Mother’s Milk and 1991′s breakthrough, BIoodSugarSexMagik. He quit abruptly in 1992; Arik Marshall filled in for that summers Lollapalooza tour (he now plays in Macy Gray’s band). Jesse Tobias lasted a little longer than a gallon of milk. Dave Navarro of Jane’s Addiction signed on for 1996′s One Hot Minute and left in 1998; now he’s working on a record with his new hand, Spread. On tour, the Chili Peppers play no songs from One Hot Minute. The fundamental problem with it appears to have been that while the Peppers like to improvise. Navarro had a different style of composition, laying down multiple guitar tracks in the studio and then melding them. Frusciante says he’s never listened to One Hot Minute. ” Nobody’s ever made a good case to me why I should,” he explains. After quitting the Chili Peppers in 1992, Frusciante descended into severe heroin addiction, nearly dying. He finally checked into a hospital in January 1998 for treatment. The following March, Flea invited him to play with the Peppers again. Kiedis remembers their first rehearsal with Frusciante as the standout moment of the whole Californication experience: “When John gets excited, he’s like 8 billion volts of electricity. He was knocking things over – it was absolutely chaotic, like a little kid trying to set up a Christmas tree. And when he hit that first chord, it was so perfect – this blend of sounds from these people who I hadn’t heard play together in so long.”

I join the band for dinner at a Moroccan restaurant where the waiters wear fezzes and the meal concludes with a belly dancer. Kiedis has begged off sick, explaining that his head has swollen up to the size of a football; the other three openly scoff at this excuse. “I came here once with my mom,” Flea says. “I stuffed myself and drank seven glasses of wine. And back then, I was playing basketball every night. I was so fanatic, I wasn’t going to not play just because I was drunk and stuffed. So I threw up all over the court.” FRUSCIANTE: You told me once about going to the court on acid and – FLEA: It wasn’t acid, it was ecstasy. I was up all night, and I went to play as soon as it got light, at 6A.M. And I could. Not. Miss. Are you the best player in the band? SMITH: [Straightening his six-foot-three frame]I’m better than him. But Flea’s very quick. I think we could take on any other band two-on-two. Who could beat us? Long silence as they ponder this conundrum Master P. FLEA:[Nodding] Master P would fuck us up. How’s Anthony’s game? FLEA: He shouldered me in the face really good once when we played basketball. SMITH: He’s a wildman. He’ll defend you like a fucking wet rag. He’s all over you, like [emits primal animal scream, accompanied by flaying arms]. Frusciante excuses himself early; he’s working on his third solo record, and he’s finding it hard to carry on a conversation when all he can think about is the mastering process. Smith and Flea amiably trade stories about their children and touring with Nirvana in South America. Flea describes a dream he had in which he was swimming, then got on land and took a bus, where he had sex with Foxy Brown; whom he says he isn’t particularly attracted to when awake. Smith says, “I thought you said Foxy Brown is nasty?” “I’m attracted to Lil’ Kim,” insists Flea. “Lil’ Kim is the one I’d like to take out to dinner.” After dessert and the belly dancer, Flea lingers in the parking lot, chatting in the chilly spring air. He shows me his automobile, dubbed “the clown car” – it’s a 1989 Mercedes with every panel elegantly painted a different colour. “I just thought it would be a cool piece of art,” Flea says. Lately he’s been having second thoughts. his 11-year-old daughter, Clara, used to love it, but now she asks to be dropped off a block away from school.