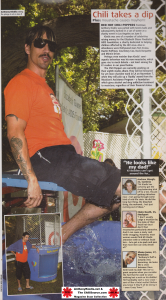 RED HOT CHILI PEPPERS
frontman Anthony Kiedis was pelted with tennis balls and subsequently dunked in a vat of water at a charity event in Los Angeles on June 9.

Kiedis was one of a number of celebrities raising money for the Elizabeth Glazier Paediatric AIDS Foundation; a charity dedicated to helping children affected by the HIV virus. Also in attendance were Hollywood stars Tom Cruise, Dustin Hoffman Courteney Cox David Arquette and Minnie Driver.

Perhaps even weirder than Kiedis’ semi-aquatic behaviour was his new moustache which gave rise to much debate- not least among the K! readers in our panel below.

The Chili Peppers are currently working on their eighth studio album. They will be honoured for yet more charidee [sic. Play on the word charity] work in LA on November 7 when they will pick up a ‘Buddy’ award from the Musician’s Assistance Program- a foundation which gives alcohol and drug addiction treatment to musicians, regardless of their financial status.