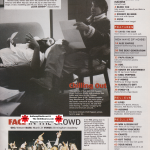 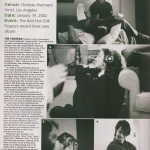 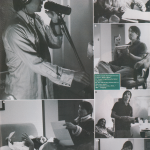 THE CHATEAU Marmont is one of Los Angeles’ more famous landmarks. Located at 8221 Sunset Boulevard, this plush, well-heeled hotel has the sort of pedigree most other establishments would sell their silverware for. Once infamous as one of the city’s most rock ‘n’ roll hangouts — the Velvet Underground and Doors frontman Jim Morrison hung out here in the ’60s, while punk-loving ‘Animal House’ star John Belushi injected a fatal cocktail of heroin and cocaine in one of its bungalows in 1982 — today, you’re more likely to see Hollywood’s elite swanning around its polished corridors.

In a suite on the seventh floor, however, there’s some decidedly rock ‘n’ roll activity going on. It’s here that the Red Hot Chili Peppers are putting the finishing touches to their as-yet-untitled eighth album. Right now, the room is a hive of activity: as well as Chilis vocalist Anthony Kiedis and guitarist John Frusciante, there’s also producer Rick Rubin (who worked with the band on their last album, 1999′s ‘Californication’), an engineer named Ethan and the Chilis’ long-time tour manager Louis Mathieu.

The room itself has been converted into a studio. Gone is the bed and associated boudoirtrappings, and the windows have been covered. A single lamp in one corner lends an air of low-key ambience to the room. As Anthony Kiedis says, it’s a great place to draw inspiration from.

The atmosphere in the suite is deeply relaxed. The recording sessions usually begin around five in the afternoon; they generally kick off with Kiedis laying down a vocal track to whichever song he’s working on (today, it’s the balladic ‘Don’t Forget’), after which the vocalist and Rick Rubin will run through the song, rewriting lyrics and redoing different sections of vocals until they’re both satisfied with the final take. Breaks take place at regular times, mainly to give people the chance to step back and listen to what’s been recorded so far that day.

Among the tracks recorded so far include ‘By The Way’, ‘Minor Thing’, ‘Dosed’, ‘Warm Place’, ‘Wolverine (This Is The Place)’ and ‘Universally Speaking’, although Kiedis insists that these are all working titles. Things are certainly moving well on the album, which is scheduled to emerge in early June, and the Chilis plan to air some of the new tracks when they tour the UK at the end of that month. Understandably, Anthony Kiedis is optimistic about the coming months.

“I think people are going to like it,” he smiles, quietly confident. “And we’re definitely looking forward to coming over to the UK…” •

7: “I know” I’ve got the perfect lyrical inspiration…”

8: “Bear with me here, because this is a little crazy…munch”