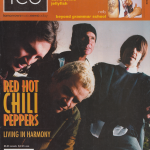 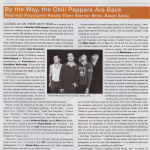 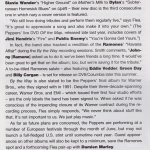 By the Way, the Chili Peppers Are Back Red-Hot Foursome Ready Their Warner Bros. Swan Song

CLOSING IN ON THEIR 20TH YEAR as a musical unit, it seems that California’s Red Hot Chili Peppers have survived it all: drug addictions, breakup rumors, numerous lineup changes and even band member deaths. Still standing strong, the four-piece ensemble dives into the summer with their eighth studio release, By the Way.

The new CD crops up more than three years after their most recent effort, Califomication, which earned itself triple-platinum status in the States and a considerable amount of critical praise to boot. That disc marked the reinstatement of guitarist John Frusciante, who joined up with the Peppers after the heroin-related death of founding member Hillel Slovak in 1988 and a short-lived membership by Parliament plucker Blackbird McKnight. (Frusciante had stepped away from the band after their 1991 triumph, Blood Sugar Sex Magik, to deal with his own drug addictions.)

Continuing to move away from their funk-punk roots – an innovative stylistic concoction that enabled the group to carve their own niche in the alternative-rock sphere – By the Way eclipses Californication‘s sparseness and strides into both smooth, melodic and lush, harmony-based zones. The disc is also the first to place a strong emphasis on keyboard-centric layerings and other instrumentally textured sounds.

Sixteen songs are featured on the disc, 14 of which had been deter-mined as of press time: “Universally Speaking,” “By the Way,” “I Could Die for You,’ Cabron,” “Warm Tape,” “Trash Your Television,” “A Minor One,” “Midnight,’ ‘Don’t Forget Me,” “The Zephyr Song,” “Venice Queen,” “Dosed,’ ‘Lemon Trees on Mercury” and “This Is the Place.”

All four Peppers – vocalist Anthony Kiedis, bassist Flea (both founding members), longtime drummer Chad Smith and Frusciante – sat down to discuss By the Way withICE. Responsible for the majority of lay-ering and overdubbing work, Frusciante elaborates on his technique and references iconic producer Rick Rubin, who has manned the console on the last four Peppers discs.

Rick and I were listening to a lot of ’50s and ’60s pop and doo-wop music at the time,” Frusciante tells ICE, referencing By the Way’s arrangements. “I’m in a Beach Boysphase now, but I didn’t actually get into Pet Sounds until after we recorded the album.”

Frusciante continues, “I was just starting to learn how to use keyboards and layers on my last solo record [2001′s To Record Only Water for Ten Days, his third lone outing]. I’m more practiced now. The overdubs take on a life of their own, almost like they’re a fifth member. We add them until the song feels right.”

He also alludes to his earlier days playing with the band, saying, “I don’t feel like I was working at my fullest potential on Blood Sugar. I was just doing what seemed technically correct, and that pleased people. I was smoking too much pot.”

As far as moving away from a more aggressive sound goes, “You can get more frustration and anger across in quieter music,” Frusciante says. “On Miles Davis’ Kind of Blue, it’s not all-out fury, but you can sense such tension brewing beneath the surface. It’s more powerful.” Smith chimes in, saying, “We used to be inspired a lot more by the Minutemen, punk stuff. Now we’ve sort of moved away from that.”

“Universally Speaking” is laced with intricate chiming sounds, to which Kiedis replies, “I wasn’t into the bells at first… it’s actually a glockenspiel. But everyone has to make com-promises.” He adds, “There were a few bumps in the road, but we worked through them.”

One such bump came about when Kiedis fell ill midway through the recording process last fall. Album production work was delayed for more than a month, especially as Frusciante was unable to map out his backing vocals or embark on the layering and mixing processes until Kiedis laid down his parts first.

Another kink arose with the excessive number of tracks the band wrote for the album: 28 in total. While each member expresses enthusiasm over their prolific songwriting, difficulty is also voiced over having to choose from so many. Moreover, Kiedis notes that, “While it’s great that they can keep coming up with new ones, it’s a lot to handle. I have to write all the lyrics and vocal arrangements!”

While Californication drew upon the positive and negative aspects of Hollywood and its impact across the globe, Kiedis cites his former girl-friend and the September 11 events as motivating factors in his By the Way lyrics. He starts by saying, “I wrote these songs before breaking up with my girlfriend [of three years]. She’s such a beautiful person and I wanted to share what I felt with her with everyone else.”

And then, “September 11 definitely inspired this album. We were out of the country at the time… it seems like we always are when there’s an earthquake, or the ’92 riots. After September 11, we wanted to give peo-ple something positive, something to uplift them.”

Nevertheless, “There’s California on this record, also,” he claims. “It just doesn’t surface in as many overt references. I write at my place in the [Hollywood] Hills, where I can see all of Hollywood on one side and the [San Fernando] Valley on the other.”

Few Peppers discs have carried a title as innocuous as By the Way; others include Freaky Styley (1985), The Uplift Mofo Party Plan (1987) and Californication. “Californication… people drew a lot of conclusions from the title alone,” says Kiedis. “This time we wanted to go for something with fewer connotations, so we chose By the Way.”

While the band peppered all its early releases with cover songs – from Stevie Wonder’s“Higher Ground” on Mother’s Milk to Dylan’s “Subterranean Homesick Blues” on Uplift – their new disc is the third consecutive one in which nary a cover version is featured.

“We still love doing tributes and perform them regularly live,” says Flea. “It’s great to appreciate a song and also make it into your own.” (The Peppers’ live DVD Off the Map, released late last year, includes covers of Jimi Hendrix’s “Fire” and Public Enemy’s“You’re Gonna Get Yours.”)

In fact, the band also tracked a rendition of the Ramones’ “Havana Affair” during the By the Way recording sessions. Smith comments, “Johnny [Ramone] asked us to do it; we’ve been fiends a long time. It would’ve been great to get that on the album, too. but we’re saving it for the tribute.” A to-be-titled Ramones salute – also featuring Eddie Vedder, Green Day and Billy Corgan – is set for release on DV8/Columbia later this summer.

By the Way is also slated to be the Peppers’ final album for Warner Bros., who they signed with in 1991. Despite their three-decade-spanning career, Warner Bros. and EMI – which issued their first four studio efforts – are the only labels the band has been signed to. When asked if he was conscious of the impending closure of its Warner contract during the re-cording process, Flea simply responds, “We never think about stuff like that. It’s not important to us. We just play music.”

As far as future plans are concerned, the Peppers are performing at a number of European festivals through the month of June, but may not launch a full-fledged U.S. stint until sometime next year. Guest appearances on other albums will also be kept to a minimum, save the Ramones spot and a forthcoming Flea pair-up with Damien Marley.

Kiedis hopes to see much of By the Way integrated into their live set by the end of their tour campaign: “We actually debuted some of these songs last year when we played Europe. We’ll try to include four or five new ones into our set list, and hopefully be playing as much as 60% new material by the end of the tour.”