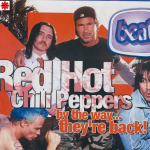 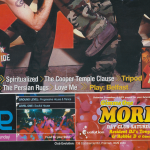 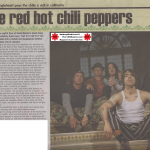 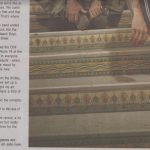 I got this in a pack of clippings and I’m not sure of the exact date; it mentions a concert held in Melbourne, Australia on 1st December, 2002 so I’ve used that as a rough date.

The door on the eighth floor of Santa Monica’s plush Casa Del Mar Hotel suddenly burst open. “Call 911! Call 911!” the exiting party yelled into a mobile and disappeared without further explanation into an elevator.

Something had to give. An entire wing of the beachfront hotel had been the working hours home to the Red Hot Chili Peppers’ entourage for almost two weeks straight. The final day of interviews to discuss By The Way, their new Rick Rubin produced album provided little in the way of relief as it dovetailed into a photo shoot for international distribution. The band themselves couldn’t have been more relaxed. Brown suit and tied guitarist, John Frusciante, who plays a central musical role on the new album was thrilled at the prospect of programming a German radio show. After all, one of his favourite bands is Can. Bass character, Flea was also in a suit with purple hair peeking out from the back of his old world detective hat. And drummer. Chad Smith who recently acquired a floor torn from Keith Moon’s Pictures of Lily drum kit was having his tattoos critiqued by a Japanese journalist. The ever enigmatic and nauseatingly healthy looking Anthony Kiedis on the other hand just, well, materialized every now and again. As a body of work, By The Way which is also the title of the first single has all the traits of 1999′s Californication which sold 12.5 million copies and counting worldwide. It’s an elixir that’s equal parts earthy soulful honesty and cosmic musing combined with a unique musicianship. However, viewing By The Way as Californication Mach 2 would be an injustice.

“I kind of liken it to the growth of a child.” says Kiedis while typically not losing eye contact for a moment. “Do you have a son? Or a nephew? Two children? OK, so you see them when they’re like seven years old and they’re one thing and they’re really beautiful and full of light and maybe they’re into collecting something or skateboarding. Then you see them three years later and it’s the same person but completely different, into a whole new thing, listening to different music, now they’re into basketball, now they’re into girls. It’s kind of like that.”

The magic is that the sounds that make up that growth were literally drawn from thin air in the laboratory that is the band’s rehearsal space. “Most of the vibe and the energy and the sort of direction of this record comes when we’re all four together, when we’re just jamming. We’ll just go off on lengthy improvisational sessions of having fun and kind of communing with one another and the air around us. That kind of establishes what we’re like at that time and then we go home and we work on individual pieces. We come in and we present them to one another and we start jamming on that and that takes on a new life form. That’s been our way since day one. That’s where we get our juice.”

It’s a process that worked almost too well this time around. The band ended up with a pool of 40 songs which they trimmed to the 28 they took into the studio. There’s The ZephyrSong with its sense of latter day Beach Boys, Venice Queen with space guitar noise over a rolling riff and the sheer emotional soul power of Midnight.

In keeping with the slight air of mystique that has long surrounded the Chili Peppers most if not all of the album’s vocals were recorded in Room 78 of the legendary Chateau Marmont Hotel – the one time home or floor to everyone from Led Zeppelin and Sid Vicious to Jim Morrison and John Belushi – which looms over Sunset Boulevard in West Hollywood. Kiedis set the mood by decorating the space with some of his vintage movie posters his new collecting hobby – and a painting by Andy Warhol.

“We chose the Chateau because it’s central, it’s beautiful, it’s from the thirties, it’s got history, I used to live there, John used to live there. So we set up a computer in the living room, microphone in the bedroom, I brought my art collection, decorated the place, just kind of set up shop. Hotels have a kind of a nice life flowing through them.”

The central theme of the album however is far more uplifting than the romantic decadence for which the Marmont is best known.

“It’s just kind of the joy of being alive and trying to be connected to this.era of beauty and gratitude in a way. There is a love theme but that sounds kind of open ended. There’s definitely a lot of love on this record, a lot of multi-dimensional types of love not just like simple, happy love but really sad love and profound love and love for you know, God and a love for the band and a love for romance and all of that.”

By The Way is out now on Warners. The Red Hot Chili Peppers are playing Colonial Stadium on Sunday December 1. Tickets on sale now.