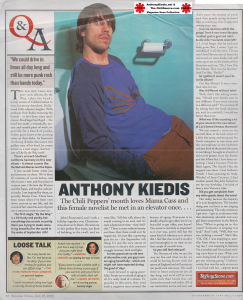 “We could drive in limos all day long and still be more punk rock than bands today.”

The Chili Peppers’ mouth loves Mama Cass and this female novelist he met in an elevator once. . . .

THE RED HOT CHILI PEPpers’ new album, By the  Way, takes the band’s lovely notion of Californication to new, harmony-drenched, Holly-wood Hills-adjacent heights. With producer Rick Rubin manning the boards – as he’s done since 1991’s classic BloodSugarSexMagik – the band has made a remarkably mature and tuneful piece of work, especially for a bunch of punky, funky guys known for putting socks on their dicks. As frontman Anthony Kiedis discusses the golden state of his band, he comes across as a real trippy charmer -sort of like By the Way itself.

There’s so much Southern California harmony on this new album – it almost sounds like the Red Hot Mamas and the Papas.

It just sounds better when you put harmony on there. We’ve done all varieties of vocals before, and this is just a new and fun place to venture into. I do love the Mamas and the Papas, and maybe, subconsciously, I am inspired by them, especially Mama Cass. There have been times when I’ve been very down and out in my life, and the sound of her voice has sort of given me a reason to want to carry on.

The first single, “By the Way,” is a bit funky and punky, but everything else sounds so pretty. Were you trying to make something beautiful for the world in the wake of September 11th?

John [Frusciante] and I took a holiday together over Christmas-time down in St. Barts. We were out in this perfect blue water, just kind of bobbing in the swell, and we were like, “All this talk about the world coming to an end, and it’s such a destructive time – that’s bullshit.” There is more infinite beauty out there than there could ever be negativity. It’s just like a growing pain for us – the September 11th thing. It’s just the very nature of existence is there’s this constant struggle between dark and light.

For the grand not-so-old men of alternative rock, you guys sure are aging beautifully – which one might not have expected during the good ol’ days.

I look forward to aging gracefully. People are so afraid of aging at all. It’s really kind of a shame. Especially in this town, they send such a negative aura around the beauty of aging. Everyone is so deadly afraid to get older, but it’s so beautiful to get older, you know? Our music is certainly as important as it ever was, and it still has the same kind of vibrancy as it always did. I feel like this record is as alive and meaningful to its time as our first couple of records were.

So you still feel relevant?

Yes. Because of who we are, the way we live and what we do, we could be having dinner with the queen of England and still maintain our punk-rock relevance. We could drive in limos and private jets all day long, and we’d still be more punk rock than bands that call themselves punk rock today. All of our motivation is true and real, and that’s more the essence of punk rock than people trying to sound like something that happened twenty years ago.

How are relations within the group? Does it now seem like your resident guitar god and swim buddy John Frusciante never left?

I could forget that he had ever been gone. But, I mean, I get reminded of it all the time. I’ll run into Dave Navarro out in front of a restaurant, or some kooky kid will come up to me on the streets of San Francisco and say, “Oh, I love One Hot Minute. That was my favorite.” And I’m like, “Really?”

So I gather it wasn’t your favorite album?

One Hot Minute? It was a troubled time for me. Was it different without John? Yeah, that’s like asking some-one, “Would your family unit be any different if you were married to a different girl?” You started off by asking how the band relations are, and, in a nutshell, I would say better than ever.

What was it like recording a lot of your vocals for the new album at L.A.’s famed Chateau Marmont?

We just rented a room on the seventh floor, in the back where it’s a little less noisy, and set up our Pro Tools computer in one room and the microphone in the bedroom and just kind of decorated the room to our liking. I brought in a bunch of old movie posters from the Forties and the Fifties that I have been col-lecting. I had a Creature From the Black Lagoon, This Gun for Hire, the original one-sheet. I had Sullivan’s Travels. I had a painting by Andy Warhol of Jean Cocteau. I had another poster that John had given me for my birthday. I’m kind of heavy into Veronica Lake.

Did you get complaints from any other guests about the noise?

Not really, because the majority of it is in headphones. The loudest thing you can hear is me singing and screaming. The only comment I got was – I got in an elevator with this absolutely adorable and sexy girl from somewhere in the British Isles: “What is going on in that room? Someone is singing real loud.” And I said, “Well, that was me, making a record.” She’s like, “Oh, OK. I was enjoying it, actually. Even when it was antagonizing me, I was enjoying it, because I’m a novelist and I’m in there writ-ing next door to you. What you were doing kind of inspired me to get my writing going.” Unfortunately, that was the only encounter I ever had with her. -DAVID WILD