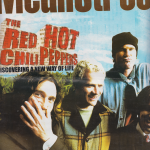 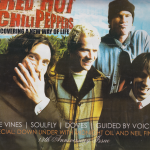 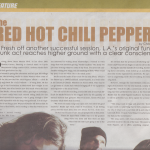 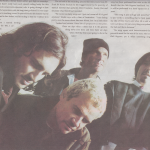 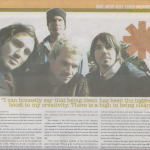 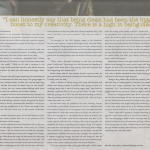 Many thanks to Invisible Movement for sharing this.

It’s a beautiful spring-like afternoon and he’s just left Village Recorders, the recording studio in Santa Monica where some of the work for the new Red Hot Chili Peppers’ album titled By The Way and slated for a July 9 release — – is being done. He has plans to go to the Troubadour in Hollywood later tonight to see The Mars Volta, one of his favorite new live bands. This is the type of stuff that Kiedis, a former heroin addict, gets high on nowadays. But it hasn’t really been such smooth sailing lately for this Venice-local-turned-rock-superstar, who is going through a slow and painful separation with his long-time girlfriend. It is an experience that is teaching a now 39-year-old Kiedis life lessons that he has not had to face before, and according to him the evidence is in the lyrics.

“When I  started writing songs in the ‘80s, I certainly was not interested in writing about relationships. I wanted to write songs that were attention getting,” Kiedis explains. “But lately I’ve just been writing whatever comes in my head. I’ve never felt comfortable writing love songs, but it’s sneaking in there. When I read my lyrics I can see where she is the initial point.”

Kiedis recorded most of his vocals for the new album, which is the follow-up to 1999’s landmark Californication, in a hotel room at the historical Chateau Marmont on Sunset Blvd. This way he can get more of a home feel without bringing all of the equipment and engineers to his actual house.

The tail end of the recording process this time around was difficult for Kiedis because he felt bogged down by the quantity of musical material that guitarist John Frusciante, bassist Flea and drummer Chad Smith had recorded.

“We wrote too many songs and I just can’t even tell if it’s good anymore.” Kiedis says with a hint of frustration. “I am feeling pretty over-the-moon about this new album, but I’m a little more freaked out because I have lost all perspective at this point. There are days when I think that it is the greatest thing we’ve ever done and then there are days when I feel like this is just going to die in the water.”

It’s obvious that the pressures of following-up the multi-platinum Californication has began to take its toll on the Chili Peppers.

During the last few months of recording, Kiedis had been writing lyrics constantly; some ended up on matchbooks or napkins and some neatly organized in a notebook. He says that he was in such a songwriting mode that everything he wrote down was in song form.

However, through the overwhelmed confusion, Kiedis shows signs of excitement over the new material, notably the song “Don’t Forget Me,” which he calls a cornerstone of the new record. The song has been performed live once at the Silverlake Silverlining Benefit that the Chili Peppers headlined, but Malls predicts that it will be performed as a show opener for at least the next three years.

“This song is just so huge and powerful.” Kiedis says, trying to put words to something that he feels passionately about. “It’s my idea of what God  is and what life is and what this whole picture is all about. It’s just everything everywhere and the good and the bad and the in-between.”

The song opens with bass-strummed-chords, which sets a powerful mood for the rest of the tune. The sound is distinctly the Chili Peppers, yet it offers something original and different through the arrangement. A new addition to the trademark Chili Pepper sound has been the gradual integration of keyboards. Frusciante has been including keyboards and electronic effects in the mix, possibly inspired by his solo work experimentation as seen on his album To Record Only Water For Ten Days.

The guitarist, who has never driven a car or had a credit card in his life, can almost be classified as a savant. According to Kiedis, Frusciante needs music like most people need air or water.

“He needs music to constantly surround him,” Kiedis explained, referring to Frusciante as one of the best modern-day guitarists in the world. “While we all take a vacation in the Caribbean he stays in his room and records a solo album, because that’s what he has to do; that’s just what makes him happy. That’s his vacation.”

The Chill Peppers have also begun exploring the possibilities of different vocal harmonies for their new songs. The group began to add harmonics on Californication, but that was only the beginning. “It’s like the Bee Gees meet the Beach Boys on this record,” Kiedis quips, letting that sly, almost-sinister-looking smile creep across his lips under the unshaven veil of black whiskers.

It is their constant evolution and reinvention that has kept the Chili Peppers one of the most relevant bands in rock for the past decade. While maintaining a distinct sound, the group has altered its music as often as Kiedis’ chameleon-like hairstyles, which have ranged from the long straight hair of the “Under the Bridge” days to mohawks on their last world tour to the current in-between jagged cut.

However, another important aspect of the Chili Peppers is their ability to never bend or dilute their art at the pressures of the industry or the music of the moment. “We had certain assholes at record companies tell us that you should shorten this song or double that chorus early on,” Kiedis recalls with a sneer. “On our fourth record we had this squirrelly little A&R guy that actually got in there and changed the arrangement of a song, which drove me crazy. He was saying that this song will get on the radio if you do it like this and we were like, ‘We wrote it like this, it has to stay like this.’ In the end we did two versions and neither of them got on the radio. We did bow and break to his pressure on that one point and I always hated him for it and now I still have a job and he doesn’t.” That same sly smile reappears.

The strength of the Chili Peppers comes in the chemistry between each member. Friends from high school, Flea and Kiedis are inseparable. The group feels that they are all on a common path now, trying to be in love with music and life and their experiences being in the band. They feel blessed to have Frusciante back in the group after his disappearance into the depths of heroin a few years ago.

“We’ve never discussed anything or had any pre-writing plans,” Kiedis said. “We just go for it and because our chemistry is so good, we’ve never had to stop and say, ‘Hey. wait a second, this isn’t happening, let’s rethink this.'”

Kiedis claims that he has recently found a spiritual side. He grew up thinking that he was an atheist but has realized that it didn’t really work for him. ‘After a lifetime of taking drugs and being self-centered and selfish and taking as much as possible while giving as little as I could get away with, I was left feeling empty and I was forced to discover a spiritual lifestyle, if you can call it that,” he said. “It was basically getting rid of all of my old ideas and starting to look at ideas of packing something into the stream of life, what can I give rather than what can I take.” He also feels ready for children of his own, thinking that he would make a good father, despite the fact that his childhood was a bit twisted. He grew up in Los Angeles in the ’70s under the loose supervision of a dad who turned him on to drugs, sex and rock ‘n’ roll at the ripe age of 12. His father was an actor, so Kiedis, who looked up to his father with all the admiration and awe in the world, quickly followed suit, landing a few early acting jobs. He mimicked his dad in everything from acting to drugs. The realization came later that his dad was actually introducing him to things that could kill him. It was an epiphany that his father was not the superhuman, infallible man that he once thought, but instead was a human struggling through his own life and doing the best he could with his son. But Kiedis feels that he can learn from his experience to be a better influence on his own future children.

“It is my experience that every generation gets a little better with the rearing of the family and kids.” Kiedis said. “I know that my grandfather was a real bastard. A lot of physical and emotional abuse. He loved my father but he used to really torment him and scare the shit out of him. So my dad moved out to California to get away from that world and he did the best he could with me. He didn’t want to subject me to any of the abuse or coldness or disconnection that he had with his father, but he went pretty extreme and we were best friends. Maybe I can learn from that and refine it and be a better father. But that’s just a theory. Give me a kid and who knows what will happen.”

Sometimes, however the apple doesn’t fall far from the tree, as Kiedis found through his many earlier bouts with drug addiction. Despite the loss of his best friend Hillel Slovak to drugs and the realizations he had with his father, the mindset of a drug addict took over as Kiedis searched for that Godly feeling that he could only find at the time through drug use.

“Being a drug addict only served my creativity for a very short time and then it worked against it, because I just wanted to be productive and drugs consumed my time and energy,” Kiedis explained. “So, I can honestly say that being clean has been the biggest boost to my creativity. There is a high in being clean.”

Kiedis is re-energized these days. He is a new man rather than the kid that unwittingly fell into the music industry 20 years ago. He now drinks herbal teas and, according to him, gets high on the idea of friendships and simple things like breathing or being able to enter that small booth set-up at the Chateau Marmont and sing on music that he believes in. And he is ready to show the world.

“I don’t watch MTV anymore; I stopped watching it a long time ago and I don’t know what it is but I’m not drawn to it,” he said. “But I’m still going to make a video and hope that they play it, believe in what we do and I am all for shoving it down the throats of the young kids out there. If these kids are used to getting a soul less pop dribble on their plate everyday, I’m not afraid to give them something that I can offer them.”