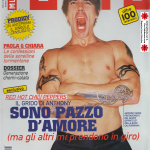 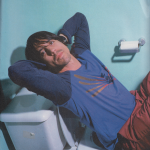 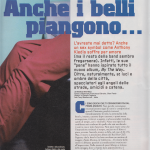 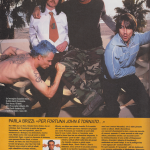 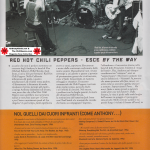 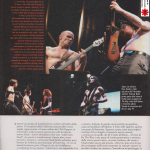 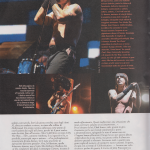 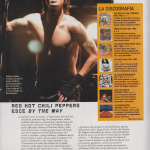 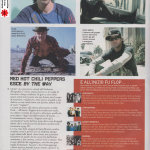 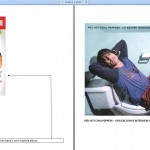 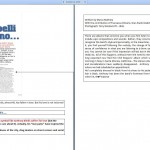 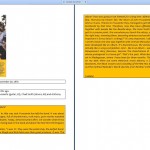 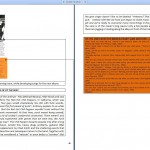 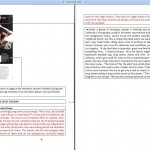 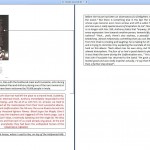 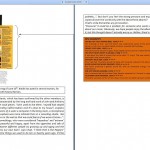 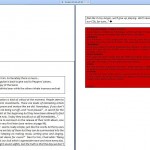 This is an Italian magazine and was kindly translated into English by Rita Bussetta who also provided the amazing diagrams linking each piece of translated text to the appropriate section on the page! Thank you so much!

There are albums that convince you when you first listen to them. Not necessarily because they include epic compositions and sounds. Rather, they convince you because you can immediately recognize the band’s style and personality. In the meantime, song after song and without realizing it, you find yourself following the melody, the change of tempo, the chorus and refrain. A new sense of confidence in what you are listening to is born: you feel at ease and everything works out. You cannot be sure if this impression will last but in the moment you enjoy the album, you really do. All of this happens, without even the need to mention it, listening to By The Way, the long expected new Red Hot Chili Peppers’ album which we were made to listen to during a morning in May in Santa Monica, California… The stereo volume has been turned down: thoughts and considerations have suddenly disappeared.  Anthony Kiedis shows up in the hotel room where we had scheduled an appointment.

He’s completely dressed in black: from his shoes to his jacket – his jeans and t-shirt too. Even his hair is black. Anthony has been the band’s frontman from their beginning, almost 20 years ago, when he, the “massive fan” who would not miss a show of the Anthym – Flea (Michael Balzary), Hillel Slovak and Jack Irons’ band – joined the group to form the Red Hot Chili Peppers. In California, which was enflamed by the punk wave, these four guys would shamelessly mix LSD with funk sounds. “Lately there is a new trend to rediscover the first period of punk”, Anthony explains to us while sitting on the couch, “but I can say that the Red Hot Chili Peppers wouldn’t exist without the Germs and the whole Los Angeles punk movement! At that time, punk meant being oneself, expressing oneself freely and getting rid of society’s conformist constraints. There weren’t any musical stereotypes to join so we could experiment with genres that we were into, like Funk without limits, in a creative and savage way”. The Chili Peppers became popular only after a long time, many albums and countless shows. Amidst this, heavy drugs problems, guitarist Hillel Slovak’s death, drummer Jack Irons replacement by Chad Smith and the shattering events that ushered John Frusciante’s entry, his desertion and subsequent return to the band. Together with the “bass wizard” Flea, Anthony can be considered a “veteran” or even better a “survivor”. But the grim singer doesn’t like to be labeled: “Veterans? That makes people think we are about to quit.   Instead I feel like we have just begun to make music. Survivors? Maybe….but it’s not over yet and we’re ready to overcome many more things in the future!”  Through the hotel window, the view is of the ocean’s long waves: only a few people are lying in the sun. Instead, many of them are jogging or skating along the alleys in front of the hotel, whilst a group of homeless people is drinking and joking under the shadow of a palm. California’s iconography couldn’t be better represented and the new Chili Peppers’ album, set as the background music, seems to be the perfect soundtrack yet again. “We are labeled as a ‘California band’, but this is simply the place where we were born, have grown up and where we live”, says Chad Smith, sitting down next to Anthony to take part in the interview. “If you are a sincere musician your country influences and conditions your music”. Yes, California, but mostly Los Angeles. “A city that lives in opposites, good and bad things, happiness and tragedy, there’s everything here… ”, Chad continues.  He is the band’s mighty drummer and is unique in his look: backwards baseball cap, long beard, shorts and shirt. Chad’s enjoying his cigarette whereas Anthony, who’s got a bad flu, looks at him crooked because the smell is bothering him. Cigarettes aside, the new songs have been inspired by the very opposing forces of Los Angeles.  First of all, the cover song… “The lyrics of “By The Way” are a kind of panoramic night view of life in this city”, says Anthony, who seems even smaller next to Chad. “I describe a sequence of events that occur at the same moment: the line to get into a club to watch a show, a homicide in a parking lot, the drug dealer selling a dose at the corner of the street…” The bond between Anthony’s life and Los Angeles is very strong. “This city has a strong influence on me: I wrote most of my lyrics sitting at a table outside this old 1930s house, where I used to live, on top of the Hollywood Hills. Before the house had been an observatory for firefighters since you can see the whole city up to the ocean.” But there is something else in the Bye The Way lyrics… “Yeah!” admits Anthony, whose eyes become even more serious and with a sullen face… “I was deeply in love with a girl and she was a really special source of inspiration to me”. Now his girlfriend, at least that girlfriend, is no longer with him. Still, Anthony states that “anyway, the album’s leading thread is love, in its every expression: love towards another person, towards life, nature and music…” And what about sadness? “Awh… yeah, there’s also sadness, a peaceful and sweet sadness, to some extent bewitching. Almost melancholy: something that you can feel only when you’re in love…”. Not far from him Chad is smoking and laughing: he is making fun of the singer for his sentimental love life and is trying to minimize it by explaining the real state of mind the Peppers were in while working hard on this album: “Each album has his own story, but this time there was a very special and relaxed atmosphere. The four of us had a great desire to play our music and to create new songs. It was kinda the same during the Californication era…” Yet again they explain how important it is that John Frusciante has returned to the band: “He gave us a positive jolt”, remarks Chad. “He looked good and was really inspired: actually, I’d say that this album is the confirmation of all of that, a further step ahead”.

The important role of the band’s guitarist, which has been confirmed by the other members, is evident in their new compositions, characterized by the long and hard work of John and Anthony at the Chateau Marmont Hotel on the vocal pieces. “John used to live there. I myself had stayed there for a while when we were recording Californication and it’s close to my house”, explains Anthony. “We decided to equip the rooms of a suite: a computer in the living room, a microphone in the bedroom and so on… The atmosphere was more intimate than in a recording studio.  We also hung some of our favorite posters on the wall so that we could feel as if we were at home…”. These Californian guys in their forty-somethings, who were considered “hazardous” and “extreme” at the beginning of their career, look peaceful and happy, apart from the cigarettes and talk of Anthony’s ex-girlfriend. “We have become different people by growing up and aging and the music we make is inevitably inspired by our own lives”, says Chad. “I think that is the Peppers’ honesty. We don’t claim to do the same things we used to do ten or twenty years ago. It’d be pathetic…”. But don’t you feel the strong pressure and expectations after having sold 26 million copies all over the world only with the latest three albums?

“Pressure? It could be a problem for someone who works at Warner…not for us. We just think about our music. Obviously, we hope people enjoy the album and are willing to wait in line to buy it, but this thought doesn’t actually worry us. Rather, there’s another problem…”. Which one? “The music industry’s situation is kind of critical at the moment. People seem to lack the strength and will to make long-term investments. There are loads of interesting artists around who aren’t allowed the time to improve and mature like we did. Nowadays, if you don’t sell enough copies of your first album you risk being cut off…and “next please!” , in search for the next Linkin Park…The Peppers didn’t sell a lot at the beginning but they have been allowed to find the time to grow and become what they are now. Today they would cut us off immediately…”.

Instead – and luckily – the Peppers are here to comment on the release of their ninth album, one of those albums that convince you from the very first listen (see review at page 99).

Life – seen from the Santa Monica beach – seems really simple, just like the words Anthony uses to explain the dreams they still have. “There are lots of them but they can be summarized into the one I have had since the very beginning: keeping on making music, writing lyrics and singing. There is no goal to achieve but only a great desire for music!”  Next to him, Chad adds: “Being successful just making honest music. This is our luck which I appreciate more and more every day. We make music for us and, I know this might sound selfish, but the truth is that the day we don’t feel like it any longer, we’ll give up playing. We’ll never keep on playing only to make people buy our CDs, for sure…”