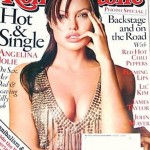 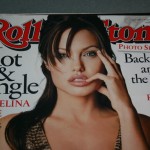 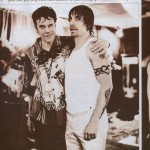 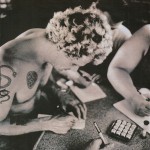 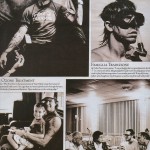 Note the same photos (and captions?) were used in a Spanish edition of Rolling Stone in November 2003

Anthony Kiedis, vocals. “This here is a picture of my pops [Blackie Dammett who runs the Red Hot Chili Peppers fan club] and me backstage after a show in front of the largest Kiedis colony on earth. I have a lot of family in the West Palm Beach area- aunts, uncles, cousins.”

BOGGLE IS EVERYTHING ON THE BUS

Flea, bass: “This is a very serious Boggle tournament. I share a bus with Louis Mathieu [tour manager] and Gage Freeman [assistant tour manager]. I always want to listen to calm classical music when we play, but Gage wants us to snort speed and listen to Slayer and really get into it. I am the current Boggle champion.”

PRINCE OF THE SURF

Kiedis: Nothing makes me happier than the ocean. I can get in it, roll around in the sand until I am a dirty little pig of a man. Then I have a shower, and Anton Corbijn captures it for a full, sexy money shot for ROLLING STONE. This picture is gonna get me laid for sure.”

John Frusciante, guitar: “I was so happy that my grandparents decided to come to the show. My grandfather hasn’t seen me play guitar since I used to play Italian songs when I was twelve years old. To my left is my father, who bought me my first guitar as well as my first wah-wah pedal.”

Kiedis: “The first time in the second verse of ‘Can’t Stop’ sings the praises of being treated with ozone. It’s a gas that’s administered through the vein. Cleans the body of viruses and bacteria. New medicine on the cutting edge.”

Chad Smith, drums: “That’s my son Justin. He’s six. He takes drum lessons, plays piano- he’s like Prince! He loves going to our concerts, because he says, I like eating blueberries backstage’ and ‘I really like your friends in the band.” So innocent.