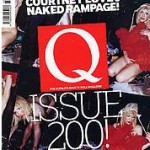 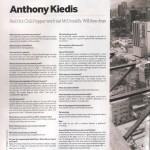 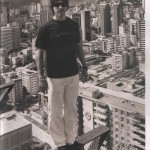 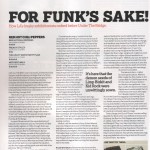 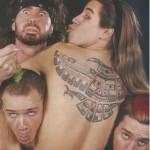 Thank you to Invisible Movement for the scans and to Sally Sturman for typing the transcript.

Where are you and what are you up to?

I’m in Utah.  It’s 10 degrees and snowing outside, but it’s warm inside my room.  We’ve just done three 16-hour days shooting videos and I’m ready for a little vacation.

He must be very special …

He’s a Rhodesian Ridgeback.  They’re beautiful dogs.  You look into those eyes and they stare right back into your head.  There’s something soulful about them.

What’s the secret to your eternal youth?

Ha, ha!  I’ve done years of dismal drug addiction and smoking everything you could put in a pipe – self-loathing, self-abusing behaviour.  But being in a band has kept me youthful at heart.  It’s mental and emotional exercise as well as physical.  It keeps me in motion.  Also, my mom and dad are very much in love with life and that is a great gift I have inherited.

What’s been the highlight of the last 16 years?

This is like having your three beautiful children on your lap and saying which one you love the most.  I guess I would say the day that John Frusciante came back into the band.  It was the summer of 1997 and we hadn’t spoken for five years straight.  We simply forgave each other.  That was an unforgettable high point.

And the low point?

There’s been a few, but the lowest of all was Hillel dying (original Red Hot Chili Peppers guitarist Hillel Slovak died of a heroin overdose on 25 June 1988).  There’s nothing lower than losing your best friend when he’s in his 20’s.  Hillel was one of the most loving and talented people on Earth.  The good news is I had 11 fantastic years with him.

Where do you see yourself in another 16 years’ time?

Hopefully being a dad on a surfboard with his kids, writing lots of music and living near the ocean.

To thy own self be true.

Who is the last person you texted?

It’s kinda personal, but it was my girlfriend Heidi.

Ah yes, the supermodel Heidi Klum.  What did you say in your text?

Again, it’s kinda personal, but I’m not afraid to tell you.  It says, Hi Heidi ho, I’m high on a mountain top and I wish I could be near your warm spots.

Who else do you love?

My six-year-old nephew Jackson.  I’m going to see him in Michigan.  I’ve got him a pair of sneakers with roller-skates on the bottom.

He’s a cardboard cut-out character at McDonald’s.  I don’t care for McDonald’s; it’s a cultural virus.  But in 1986, Hillel and I were in line at McDonald’s when a couple of roughneck motherfuckers came in and one of them proclaimed, I’m gonna have to punch somebody!  Hillel said, How about Mayor McCheese?  Sometimes a little humour can work.  I’m not a violent person, but I have a strange reaction to people who try to boss me around, like cops.

When were you last pissed?

Drunk?  Sometime in the decade that we know as the ‘90s.  I get drunk on other things now – air, smells, sounds.  The hangover is much smaller and I never have to feel like anyone other than myself.

All you have to do is open your eyes and look around.

What fantasies do you have left to fulfil?

Making a three-point basket in an NBA game, which won’t happen until I enter a virtual universe.  Basketball is a beautiful form of sport.  I’m a Lakers fan.

Who is the greatest living Englishman?

Harry Potter.  Can you think of anyone better?

Tell us a joke

What’s the last thing a stripper does with her asshole before going to work?  Drops him off at rehearsal.

And what do you call a musician without a girlfriend?  Homeless.

Do you think that what you do is worthwhile?

Always has been.  From the first day we started the band, I felt an enormous wave of satisfaction.  It gives my brain and spirit a direction in life.  Right now I’m on an American mountain top.  I’m eating good food and I’m about to play an outdoor rock show under the Utah skies where the people have love in their faces.  Of course, there have been moments of egotistical implosions and mind-blowing collapse, but that’s life – a combination of good stuff and hard stuff.

“I’ve done years of dismal drug addiction and smoking everything you could put in a pipe.”