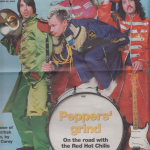 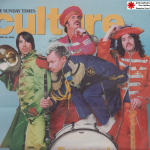 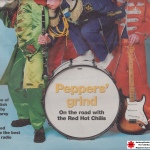 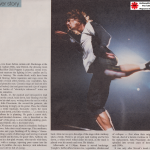 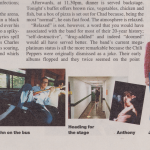 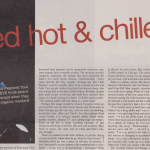 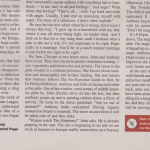 Please Note: The magazine was too big for the scanner so the pages were scanned in two halves (there is some overlap)

It is 7pm, two hours before curtain call. Backstage at the Palace in Auburn Hills, near Detroit, the dressing room for the Red Hot Chili Peppers is peaceful, serene even. Inside their sanctum the lighting is low; candles are lit, incense is burning. The cinder-block walls have been draped with flowing fabric tapestries and rugs cover the floor. A table of food offers berries, raw vegetables, figs, hummus and pistachio nuts. Ceramic mugs are laid out next to a basket of herbal, chai and green teas and a jar of organic honey. Clear bottles of “electrolyte enhanced” water are lined up, like statuettes.

Anthony Kiedis, 41, the puckish and introspective lead singer, sits on the couch, head down, hair floating over his forehead into his dark eyes, writing down the set list with a black pen. John Frusciante, the savant-like guitarist, sits opposite, practising lovingly on his guitar. Flea, the vibrant bassist, in a white tracksuit, buoyantly enters the room singing “Up and down, you little weaslers …”, a verse for a children’s album he is planning. He grabs a carrot stick. Chad, the red-blooded drummer, who is described as the most “normal” of the group. is down the hall, smoking, greeting family and friends; this is his home town.

When it’s 30 minutes to go, there is a ritualistic feeling to the countdown. John does vocal warm-ups. Flea meditates, practises scales and yoga, finishing off by doing a “cleansing” — lighting a stick of dried sage and waving it around the room, himself and his bass, for good vibes. Anthony sits back; a nurse in a hot-pink sweater, who travels with them, is kneeling with a syringe, injecting pure ozone into his bloodstream. It purifies, she says, destroys viral infections; soon his blood will be full of energy.

As they jog onto the stage, the crowd roars. In the arena, there is combustible energy. A peroxide blonde in a black bra is gyrating next to a frat boy with his arm draped over his teenage girlfriend, next to a science teacher, next to a spiky-haired, eyebrow-pierced rock chick. Anthony’s lyrics spill out like a beat poem; it is no surprise he enjoys Charles Bukowski’s poetry. After an hour, the adrenaline is soaring, the endorphins have kicked in. Anthony spins and whirls dervish-like, then pulls back. John moves up to the edge of the stage while Anthony takes a break. There is an oxygen tank waiting and he lies down, a white towel rolled under his neck, as the mask is placed over his mouth and nose. He inhales.

Afterwards, at 11.30pm, dinner is served backstage. Tonight’s buffet offers brown rice, vegetables, chicken and and fish, but a box of pizza is set out for Chad because, being the most “normal”, he eats fast food. The atmosphere is relaxed.

“Relaxed” is not, however, a word that you would have associated with the band for most of their 20-year history; “self-destructive”, “drug-addled” and indeed “doomed” would all have served better. The band’s current mega-platinum status is all the more remarkable because the Chili Peppers were originally dismissed as a joke. Their early albums flopped and they twice seemed on the point of collapse — first when their original guitarist, Hillel Slovak, died of a heroin overdose in 1988, and again when his replacement, John Frusciante, also left the band and spiralled into several years of heroin addiction in the mid-1990s.

It was only after Slovak’s death that the band as we know them today really took shape. Three factors sharpened up their sound: the arrival of drummer Chad Smith, the hiring of producer Rick Rubin, whose hip-hop sensibility was employed to curb the band’s muso excesses, and, the presence of Frusciante. Only 17 when he joined the Chilis, Frusciante was a fan who had learnt the guitar parts to all their songs. But despite his youth, his arrival helped the band to grow up musically. It was when Frusciante arrived that the Chilis found a softer, slower side to balance their trademark funk-rock. And it was this new side to their music that won them a huge cross-over audience, drawn in by ballads like Under the Bridge. Yet, though Frusciante helped the Chilis achieve huge world-wide success, it didn’t make him happy. After a period during which he appeared to be wilfully sabotaging gigs, he left in 1992.

Without Frusciante, the band lost the chemistry that had made their 1991 album, Blood Sugar Sex Magik, so successful. Their 1995 album, One Hot Minute, was a disappointment. Frusciante, meanwhile, had been so deep in addiction that he later recalled being visited by creatures “from the other side” — visitors so real he cooked meals for them. But when he finally came off heroin, far from being a drug casualty, he came back musically stronger than ever.

To prepare for his return, Frusciante studied the work of late-1970s and early-1980s synth bands — Human League, Depeche Mode, Gary Numan — trying to understand the secrets of their ultra-simple melodies. The idea of a technically proficient guitarist trying to play the one-finger keyboard lines plonked out by amateurish musicians may seem strange, but it certainly worked. The resulting melodic simplicity underpins the ballads that have propelled the band’s two most recent albums, Californication (12m+ sales) and By the Way (rapidly catching up). The Chili Peppers’ sound is usually taken to be a fusion of rock and funk. Few people realise that their best-known songs also owe a huge debt to the likes of Phil Oakey. But then, despite their more recent longevity, the band have retained their image as a hard-rocking live band. As Rubin said recently: “The general public still sees them as a party band.”

Perhaps this image would be dented if people could see on board the tour bus that ferries Kiedis and Frusciante to their Chicago gig the next day, with its strict no-smoking, no-alcohol rule. (Flea and Chad’s bus does permit these vices.) Inside, it is refined, tasteful, plush: blond wood, leather couches, plasma TV and cutting-edge electronics. Time on the bus is spent watching episodes of The Simpsons and King of the Hill, film noir and westerns. They listen to music, eat, read, and on Chad and Flea’s bus, play Boggle.

He says he can now admit when he is wrong, but it wasn’t always this way. “I grew up in a household with my dad, where it was all about being right, no matter what. And I held on to that for a very long time, until I realised what a pain in the ass it was. It’s not important to be right. Especially in a marriage. You’ll be in a much happier marriage if you forfeit the right to be right.”

By 5pm, Chicago is two hours away. John and Anthony have to eat. They have meals in plastic containers waiting —raw vegetables and brown rice and protein. The nurse in the pink sweater is a constant presence. She knows about nutrition and homeopathy and holistic healing. She also knows that Anthony follows The No-Nonsense Guide to Diet, by Dr Philip Maffetone. Anthony and John sit facing each other at the table. Out of the window, rural scenes of middle America glide by. John drizzles olive oil into his box, but then suddenly jumps up and is opening cabinet doors, a flurry of activity. He turns to the nurse, panicked: “Are we out of mustard?” Anthony looks concerned. Having organic mustard on board is essential. The nurse assures them it will be taken care of and they relax.

“Wanna watch The Simpsons?” John asks. He is already popping in the tape. The sun is beginning to set and we are stuck in bumper-to-bumper traffic somewhere on a freeway in Illinois. In a few hours, they will be on stage in front of 20,000 people in Chicago. The episode of The Simpsons begins and John, sitting, feet up, hugging his knees, is laughing out loud, with a freedom and intensity that is infectious.

John is a solitary person. He doesn’t go on holidays. He listens to Mel Brooks and Carl Reiner’s famous Two-Thou-sand-Year-Old Man comedy recording over and over and over while he is eating. When he’s not on tour, he’s trying to record as many of his own songs as he can. On the last break, between touring for Californication and writing By the Way, he released a solo record and did a solo tour. He feels that in the past few years he’s had a lot of catching up to do.

“I’ve worked twice as hard these past five years. Because when I was a drug addict and I wasn’t doing anything whatsoever — except lying in bed and taking drugs for about four years — it was the prime years of my life, 22 through 26, when most musicians are doing their best stuff. For me now, it’s a matter of making the best use of time. Not letting anything slip away.” Relationships, pop culture, modern movies, news and TV — all of it is a diversion from his music. “I’m very proud to be who I am, and I don’t have any interest in changing to accommodate somebody else’s needs. I’m a very cold person in that way. The ways that I am insecure only come up in a male-female relationship. Otherwise I feel very secure with who I am.”

The Tweeter Center in Chicago is an outdoor venue.The chill of autumn is in the air. The dressing room has been replicated. It is a different space, but the same decor. Anthony begins making the set list and John roams the room with his guitar. Flea is excited, hooked on a new verse: “Don’t be naughty; go to the potty!”

It’s 9.05pm, 10 minutes before the show, and the lights go down. The stage is smaller, but the electricity is just as palpable. On stage, Flea’s bass is pure jubilation and Chad is whipped up in a testosterone frenzy. A bra is tossed onto the stage. Anthony picks it up and drapes it around his hips. Chad tosses a drumstick out into the crowd. John and Flea improvise the intro to Californication. The air is crisp and cool; hands are cold, breath is visible.

At the end of the show, the hallways backstage are filled with friends and relatives. The buffet is set out, with the lone pizza box nearby. Anthony’s mom is on hand, and Chad’s six-year-old son rolls on the floor, while Flea lies on his back, arms out, hands cupping his head. The Chili Peppers have been around for two decades, and they have been travelling for a long time. It is tedious at times, but it’s what they do, and they still like it. Tomorrow is another day and they will be moving on to Cleveland, Ohio; doing it again.