Thank you to  Giovana (Brandy) for kindly scanning and sharing articles from her magazine collection & many thanks to Aline Silva for so kindly taking the time to translate the article into English.

Greatest Hits, The Red Hot Chili Peppers (Warner) – When the Californian quartet appeared in the 80s, they were punished by the critics: they were told they were incapable of developing a good melody, although the rhythm of their songs was catching (thanks, mostly, to the bassist Flea’s energy). The problem was solved in 1989, with the arrival of a first-class melodist to the band – the guitarist John Frusciante. From that moment on, the
Chili Peppers joined the first team of the great rock bands. Greatest Hits brings all the hits from the band’s most glorious phase, with special emphasis to Under the Bridge and the mixtures of funk and rock present in Give It Away and Soul to Squeeze. The CD has two editions: one simple and the other is accompanied by a DVD with videos. 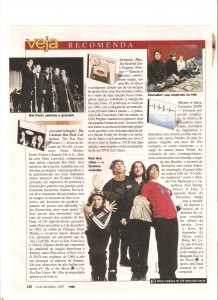