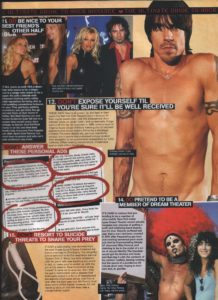 12. Don’t expose yourself til you’re sure it’ll be well received.

THESE DAYS they’re all grown up, but back in their youth the Red Hot Chili Peppers were infamous for their nudist tendencies- see the exhaustively documentary ‘socks on cocks’ look- and occasionally things went a bit too far. So it proved in 1989, when a court in Virginia found singer Anthony Kiedis guilty of indecent exposure and sexual battery following a backstage incident. The exact details are, perhaps mercifully, unclear, but it seems that shocked college student took exception to an unscheduled appearance by ‘Little Anthony.’ When making introductions, it’s perhaps best to start with a handshake.