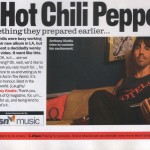 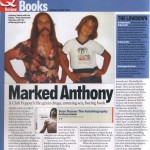 Many thanks to Iva at Invisible Movement for these scans.

Here’s something they prepared earlier.

The Chilis were busy working on their new album in LA, but they sent a decidedly wonky home video. It went like this.
FLEA: OK, it is… are we happening? Oh, well, we’d like to say thank you very much for… for being nice to us and voting us to be Best Act in The World. It’s quite an honour. Best in the entire world. [Laughs]

Anthony Kiedis: Thank you, readers of Q magazine, for, um… voting for us, and being kind to us. That’s it.

There are clearly only so many drugs a man can take. This much is clear from Scar Tissue.What it makes clearer still is that there is only so much reading about a man taking drugs anyone can take.

On and on and on he goes. Shooting cocaine and heroin as if they were illegal (for California royalty, nothing is forbidden); drinking his own dangerously low bodyweight in wine and smoking everything from Marlboros to more heroin, via marijuana. And when he’s not doing drugs, he’s thinking about doing them.

As a result, Scar Tissue is less Kiedis’s autobiography, more the autobiography of his drug taking, from his father introducing him to chemicals as a pre-pubescent to his current sobriety, despite a relapse during the making of By The Way. By the end, you rather fancy an armful of Afghanistan’s finest yourself.

When the book moves on from drugs, it touches on the music, but prefers to lurch towards sex. Naturally, the money shot comes with sex and drugs. There is, you may be unsurprised to read, nothing quite like sex on heroin. Those with a smidgen of medical knowledge, however, will be surprised to discover that this 42-year-old former heroin addict has seemingly never had bad sex in his life.

Unforgivably, Kiedis shares little, save for his disdain for Chili Peppers drummer Chad Smith, whom he sneeringly refers to as “Mr Class” at one point. As he admits, he always keeps 25 per cent of himself for himself. Here, the man who describes himself as “jealous, raging, controlling, selfish and bratty” seems to be holding back rather more. Certainly there is no indication of just what fascinating company Kiedis is. What a missed opportunity.

Best Bit: His surreal childhood with his actor/drug dealer/ladies’ man father. They dressed alike, they occasionally shared the same women and they took drugs together. Think Absolutely Fabulous with the offspring joining in.

Worst Bit: Tongue in the dirt: a “hilarious” game which began when Kiedis coughed up a ball of phlegm and dared Flea to eat it. A Chili Pepper tour contest, where each man had to outgross the other, was born. If they had been sufficiently hygiene- conscious to use towels, they’d have flicked them at each other.