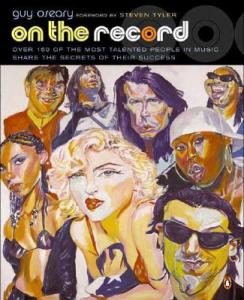 Did you have a mentor or someone who inspired you? If so, what have you learned from that person?

As a kid, I was a cocky little bastard who thought he didn’t need a mentor. Eventually I realized I idolized my father and came to accept him as my mentor. He showed me the joy of nonconformity, the freedom of antiestablishmentarianism and turned me on to Roxy Music and Ernest Hemingway. He also got me into the dictionary.

I was also influenced by Woody Allen, gravity, the Marx Brothers, teenage girls of the seventies, David Bowie, Grandmaster Flash and the Furious Five, P-Funk, Magic Johnson, James Brown, and, as an ongoing inspiration, Darby Crash.

What was your very first job in the music industry, and how did you get it?

My first job in the music was introducing a la MC style my friend’s band called Anthym. I would do these elaborate and comically theatrical intros to their little club shows – another art I learned from my father. I didn’t get paid, but I loved the rush. Previous to that, I had performed in the chorus line of musical productions at Fairfax high.

What was your first big break? The first great thing that ever happened to you…

I’m not sure if I agree with the idea of “breaks”. I feel like you creeate your own “breaks” or opportunities by putting yourself in creative situations and working hard at what you love to do. The first great thing that happened didn’t happen to me. It happened with me and my best friends when we were asked to put together a one-time-only band performance to open a show.

What elements of your job make you want to go to work every day?

I don’t want to go to work every day. Some days I’m filled with the light of musical ecstasy and I can’t wait to go to be a part of creation, and some days I just don’t feel it. On the days when I am feeling it, it’s the sense of making something out of thin air. Where there was once a blank page, there is now a poem, a song. I also feel blessed to have my work revolve around friendship and love.

What qualities most helped you to get where you are today?

Being able to recognize the beauty in life.

If you knew everything at the beginning of your career that you know now, what would you have done differently?

It all happened perfectly, even the pain and loss. It had to be as it was. The mistakes are what made it sweet when it found its rhythm.

I wasn’t very organized about the approach to “my career”. I didn’t look at it like this thing that needed to be carefully molded and perfectly manicured. My band had a life of its own, and when I put some good food and energy into it, it grew beautiful fruit. When I put poison in it, and starved it of love and care, it grew shit sandwiches.

What is your greatest lesson learned?

An untamed ego will destroy the party. Never give up hope on anything or anybody. Let people know you love them before they die. Clean your emotional house and trust your intuition. Don’t take yourself too seriously.

What are some of your favorite albums?

I am not a favorites person nor am I a list person. A few of my favorite albums are:

Double Nickels on the Dime, Minutemen

Did you have any posters on your bedroom walls as a kid? Of whom?

I only had one poster on my wall, Andy Warhol’s Chelsea Girls.

What are some great shows you’ve seen?

Art Blakey and the Jazz Messengers, 1980

Many thanks to Iva from Invisible-Movement for typing this out (For anyone interested, I believe the John Frusciante interview from the same book will be on that website when it’s back from it’s revamp.)