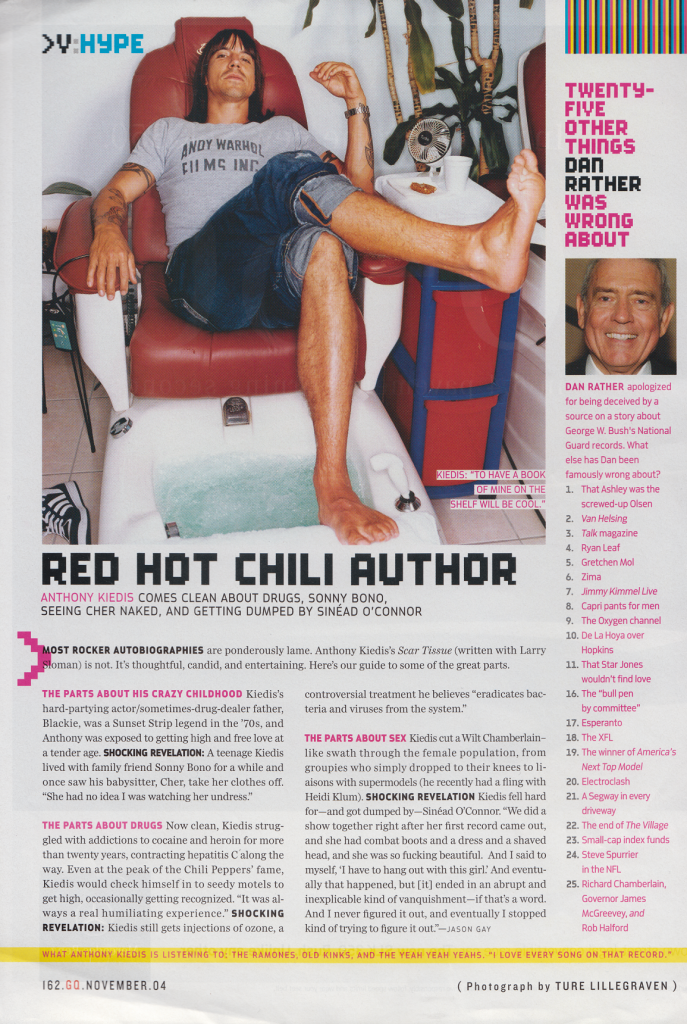 Most rocker autobiographies are ponderously lame. Anthony Kiedis’s Scar Tissue (written with Larry Sloman) is not. It’s thoughtful, candid and entertaining. Here’s our guide to some of the great parts.

THE PART ABOUT HIS CRAZY CHILDHOOD Kiedis’s hard-partying actor/sometimes-drug-dealer father, Blackie, was a Sunset Strip legend in the ‘70s, and Anthony was exposed to getting high and free love at a tender age. SHOCKING REVELATION: A teenage Kiedis lived with his family friend Sonny Bono for a while and once sae his babysitter, Cher, take her clothes off. “She had no idea I was watching her undress.”

THE PARTS ABOUT DRUGS Now clean, Kiedis struggled with addictions to cocaine and heroin for more than twenty years, contracting hepatitis C along the way. Even at the peak of the Chili Peppers’ fame, Kiedis would check himself into seedy motels to get high, occasionally getting himself recognised. “It was always a real humiliating experience.” SHOCKING REVELATION: Kiedis still gets injections of ozone, a controversial treatment he believes “eradicates bacteria and viruses from the system.”

THE PARTS ABOUT SEX Kiedis cut a Wilf Chamberlain-like swath through the female population, from groupies who simply dropped to their knees to liaisons with supermodels (he recently had a fling with Heidi Klum). SHOCKING REVELATION: Kiedis fell hard for-and got dumped by-Sinead O’Connor. “We did a show together right after her first record came out, and she had combat boots and a dress and a shaved head, and she was so fucking beautiful. And I said to myself, ‘I have to hang out with this girl.’ And eventually that happened, but [it] ended in an abrupt and inexplicable kind of vanquishment-if that’s a word. And I never figured it out, and eventually I stopped kind of trying to figure it out.”