Anthony Kiedis, poses in the Little Italy section of the Manhattan borough of New York on Oct. 7, 2004. (A.P.) 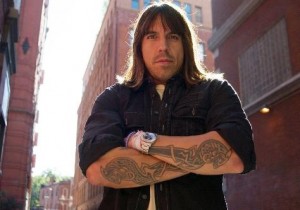 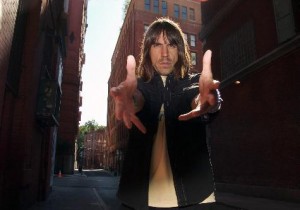 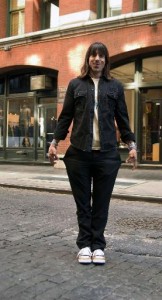 NEW YORK (AP) – Anthony Kiedis sits at a table in a swank New York hotel, his
breakfast consistently interrupted by adoring women coming over to caress his
arms and kiss his cheek.

It’s impossible to know if he just met them,
because he treats each one as if he’s known them forever, putting down his
forkful of scrambled eggs with veggies to look directly into their
eyes.

At 42, the Red Hot Chili Peppers lead singer is toned and hip,
forearms blanketed with tattoos, wearing a yellow T-shirt with a naked woman on
it. He’s also incredibly calm and articulate. It’s hard to believe he’s the same
crazed frontman who performed countless concerts wearing only a sock, had bones
broken during a show, and nursed a nasty drug addiction for most of his life.

Kiedis spent three months putting his wild ways down on paper, and
recently released a 500-page autobiography, “Scar Tissue.” (Hyperion, $24.95)
The book is an honest look at how heroin and cocaine nearly ruined his career
and his life, and ended the lives of some of his best friends and bandmates. It
also details the rise of the Chili Peppers, whose 1991 album “Blood Sugar Sex
Magik” made the band a household name. Their 1999 album Californication sold
more than 13 million copies worldwide, and 2002’s “By The Way” peaked at No. 2
on the Billboard charts.

Kiedis has been clean for more than five years
now, and is convinced he’ll stay that way, though he says he’s still obsessed
with drugs. One relapse was caused after a trip to the dentist and some
painkillers to take out a tooth. But this time he says he’s changed the way he
goes about life. He has become more focused on music than ever and expects great
things from the band, which is recording a new album.

AP: How do you
draw the line between recreational drug and alcohol use and
addiction?

Kiedis: I can’t. That’s my problem. I have a different
reaction to drug use for some reason. I never had a choice, really, and I
suffered enormous heartbreak and repercussions for it.

AP: What made you
stop?

Kiedis: I was so physically and mentally sick of feeling horrible
all the time.

AP: So what are you doing different now that you think you
can stay clean for good?

Kiedis: The main thing I’m doing now is trying
not to be such a self-centered pig. I try to follow suggestions without
following the past. You have to look at it differently. Instead of the drive,
the crazy need to get high, I try to think, ‘What can I do to be of service to
the world?’

AP: So what do you focus on now that you’re not focusing on
drugs?

Kiedis: When you’re using, your days are very spelled out for you.
It’s a kind of ‘Groundhog Day’ way of life. You know what you’re going after.
Now I have freedom to create my days as I want to.

Kiedis: I have some kitchen rituals, like I make this big green
concoction with all this good stuff, and I drink a strong pot of black tea and
hang out with my dog by the pool.

AP: Ever want to get married or have
kids?

Kiedis: I think kids would be phenomenal, the biggest experience of
a lifetime. But I’ve never been attracted to the type of woman who wanted to
have that experience. I guess they’re not such maternal types.

Kiedis: I don’t know, because I’m totally screwed up.

AP:
How has the band’s sound changed?

Kiedis: I think it’s been a natural
progression as we’ve changed and learned more about being musicians. Because I
was so ignorant and amateur when I started, I had to learn on the job. My
learning curve started late, but I’ve finally gotten somewhere. You’ll see a lot
more harmony and intricate arrangements to our songs now.

AP: You guys
planning any more concerts wearing only socks?

Kiedis: Hey, if the moment
demanded a sock. If people said ‘You’re too old for that’ or something where we
need to do it, we’ll do it just to shake things up.

AP: Why did you
decide to write a book? Was it difficult?

Kiedis: I’ve lived through a
lot of adversity and struggle, and my friends got sick of my stories. I was so
kind of tuned into the culture of the 1970s and 1980s and I wanted to share it.
I thought I had something to say.

AP: In the book you say your father
smoked pot with you when you were young, do you blame him for any of your drug
troubles?

Kiedis: I don’t think my dad knew any better. During that time,
everyone wanted to turn everyone on to it, no one knew how bad it was. I don’t
blame people for my shortcomings and disasters. They’re all mine.

AP:
Tell me about your relationship with Flea, the Chili Peppers bassist? You’ve
been through a lot since you guys met in high school.

Kiedis: It’s
continued to be a strong and deep friendship though I didn’t nourish it or love
it as I should have. We’ve been through our ups and downs, the beauty of that
friendship is that it remains.

AP: Do you have any advice for young
rockers?

Kiedis: My own advice is to not take any of my advice. Ever. And
no matter the audience, play music that speaks to you.

Thanks to Julia Cher for originally posting this