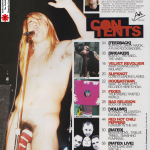 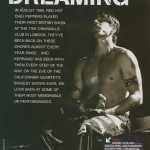 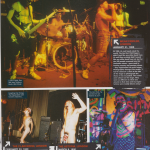 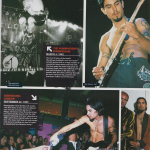 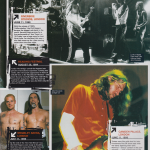 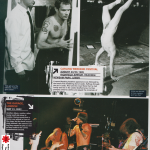 IN AUGUST 1985, RED HOT CHILI PEPPERS PLAYED THEIR FIRST BRITISH SHOW AT THE TINY DINGWALLS CLUB IN LONDON. THEY’VE BEEN BACK ON THESE SHORES ALMOST EVERY YEAR SINCE… AND KERRANG! HAS BEEN WITH THEM EVERY STEP OF THE WAY. ON THE EVE OF THE • CALIFORNIAN QUARTET’S BIGGEST SHOWS EVER, WE LOOK BACK AT SOME OF THEIR MOST MEMORABLE UK PERFORMANCES.

The Peppers interrupted writing their follow-up to ‘Californication’ to headline this two-day festival. At both shows the crowd were treated to new songs from their forthcoming album with a couple of cover versions – including songs by The Germs and Siouxsie And The Banshees – thrown in too. In Chelmsford, Flea also conducted the crowd in an impromptu sing-a-long of children’s favourite ‘Row Your Boat’.

The Chills rounded off their triumphant ‘Uplift Mofo Party Plan’ tour in Europe with two shows at this now defunct club in Hammersmith. In celebratory mood, the Peppers broke out their favourite party trick for the shows – the infamous ‘socks on cocks’. The following day, similarly attired, the quartet would pose for the famous cover of their ‘Abbey Road EP’. Sadly, these would be guitarist Hillel Slovak’s final UK shows.

This was the Chili’s final European show promoting their ‘Mothers Milk’ album. They’d played the same venue on February 11, and wanted to do something special. The band and crew had arrived early at the venue and set about painting a massive paper back-drop in UV paint. Chad Smith’s drum kit was also given the treatment, as well as various parts of the stage. Just before show time they also completely painted themselves head to foot…

IN 1988, LA rock bands ruled the world. The Red Hot Chili Peppers didn’t look like any other band from LA and they certainly didn’t sound like any other band from LA, but for the 500 people crammed into this Harlesden venue – more used to hosting country and western shows – they represented LA rock’s future. Photographer George Chin recalls: “I had to stand on a chair at the side of the stage to photograph the show, it was so packed. The crowd were almost on the stage. They were so different to what was around at that time and my expectations were totally blown away.“

With the release of 1999′s ‘Californication’ the Chili Peppers became the biggest rock band in the world. Securing their services for a live performance of ‘Scar Tissue’ on ‘TFI Friday’ was a huge coup for host Chris Evans. For the band, this was a nice little warm-up for a late evening secret show the same night. ”

‘Under The Bridge’ turned the Peppers into genuine international superstars. Coming two weeks after the band’s appearance in front of 250,000 fans at the Woodstock II festival – with Dave Navarro manfully filling the void left by Frusciante’s departure – their first ever UK festival headlining date was also their only UK show of the year.

By the end of the ‘One Hot Minute’ tour, the Chili Peppers were ready to headline their first ever arena show. With rumours circulating that all was not well in the Peppers camp, many believed that this could be their last show. During a pre-show Kerrang! interview, the band said nothing to dispel these rumours, though their backstage photo session featured the traditional tooling around. Their set featured a stunning cover of Fugazi’s ‘Waiting Room’.

Tickets were like gold dust for John Frusciante’s first UK show back with the band. Opening with ‘Emit Remmus’ – chorus   ‘London in the summertime…’ was a smart way to get an already partisan crowd onside from the off. It was as if Frusciante had never been away.

A second Reading headline appearance was followed by the band’s first headlining slot at Leeds. Halfway through the set in Leeds, Flea told the crowd there that he had family tree ties in the Leeds/ Bradford area. He then promptly shed his clothes and played the remainder of the gig naked.

Another album, another ridiculously small club show in London. During soundcheck a barrier was placed in front of the stage, but the band immediately insisted it be removed saying they wanted to play as near as they could to the crowd. Pandemonium ensued.