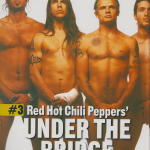 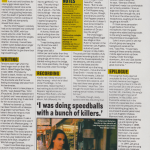 For most of the ‘80s, the Red Hot Chili peppers were the ultimate Hollywood party band. Their groinally fixated funk rock and fondness for playing gigs naked apart from strategically placed tube socks had built their reputation as sex-crazed, drug-guzzling hedonists. Even the death of guitarist Hillel Slovak from a heroin overdose in June 1988 only temporarily slowed them down.
But the Chili Peppers’ notoriety had yet to translate into worldwide success. By 1990, with four bawdy albums under the belt, they had failed to dent the singles charts on either side of the Atlantic. Ironically, it would take a bitter-sweet ballad about singer Anthony Kiedis’s struggle with heroin addiction to give them their big breakthrough.

Tensions were high when the band began work on their fifth album, Blood Sugar Sex Magik, in late 1990. Prompted by Slovak’s death, Kiedis had finally kicked his own smack habit. The downside was that he was feeling increasingly alienated from his bandmates.

“Anthony was in a new phase in his life,” says bassist Flea. “John [Frusciante, Slovak’s replacement on guitar] and I were stoned out of our brains all day long. It was hard for him to be around us.”

Before he cleaned up, Kiedis had been friends with a Mexican drug dealer named Mario. The latter’s favourite hang-out was under a freeway bridge in downtown Los Angeles. It was a no-go area for anyone who wasn’t a member of a Mexican gang- in order to be allowed in, Kiedis had to pretend to be engaged to Mario’s sister. This would prove to be a major factor in the break-up of his two-year relationship with actress Ione Skye, daughter of ‘60s folk singer Donovan.

“I spent countless days laying on a bunch of old mattresses and shooting up,” Kiedis recalls. “I’d had this beautiful angel of a girl who was willing to give me all of her love, and instead of embracing that, I was doing speedballs with a bunch of fucking killers.”
Driving home after one especially fruitless rehearsal, which Flea and Frusciante had spent smoking marijuana and doing nothing else, Kiedis began reflecting on the breakdown of his various relationships.
“I wasn’t making any connection with my friends or family, and I had no girlfriend,” he says. “The only thing I could grasp was this city. It was LA- the hills, the buildings- that was looking out for me more than any human being. I started singing this little song to myself: Sometimes I feel like I don’t have a partner…”

At home, Kiedis set about writing down the song swimming around in his head.

“I was thinking about my life and how sad it was,” he says. “But things were still a million per cent better than they were two years earlier when I was using drugs all of the time. I just started writing about the bridge, and, more specifically, the things that occurred under the bridge.”

Kiedis was initially reluctant to play the song- which he’d titled Under The Bridge- to his bandmates, reasoning that it had nothing to do with the Chili Peppers’ signature sound. Producer Rick Rubin, who had signed on to produce the new album, felt differently. He stumbled across it when he was leafing through the singer’s lyric book.

“He sang it to me and I thought it was beautiful,” recalls Rubin. “But he was emphatic that it wasn’t a Chili Pepper song. I said, it’s you, though, and what you and the Chili Peppers create is what you do. It doesn’t have to be limited to funk jams. It’s just a question of: Do you love the song?”

The Chilis began recording Blood Sugar Sex Magik in Rick Rubin’s mansion in the bohemian Los Angeles suburb of Laurel Canyon in May 1991. The producer had installed a fully equipped recording studio in the heart of the house especially for the sessions, with the control room in the library and the instruments set up in the living room. The band- minus drummer Chad Smith- moved into the mansion for six weeks. Little did they know that it was haunted.

“Someone did a séance, and they said there were ghosts all over the place,” says Flea. “John thought he could hear a woman making sexual noises. It freaked him out.”

For Kiedis, though, randy spooks were less disturbing than the prospect of singing his most nakedly personal song.

“I remember going up to do Under The Bridge and just thinking, Oh my God, I can’t believe I have to sing this,” he says. Brendan O’ Brien [engineer] made it as comfortable as humanly possible.  I’d be on edge and insecure, trying to let the spirits flow through me, and he’d be on the other end of the headphones, laughing at me and laughing at himself.”

If it took some persuasion to get Kiedis in front of the microphone, then the guest signers who added backing vocals to the song’s swelling finale required less encouragement.

“John’s mom came in with her church group and sang the background vocals at the end,” says Flea. “It was trippy seeing all these smartly dressed middle-aged women up there singing Under the bridge downtown. John and I just looked at each other. It was one of those great moments.”

The song that Kiedis deemed unsuitable for the Chili Peppers ironically became their biggest hit, reaching number 2 in the US and number 26 in the UK (when it was reissued in 1994, it reached number 13). Inevitably, the song’s success brought a new set of problems. In May 1992, John Frusciante walked out in the middle of a Japanese tour, unable to deal with the pressure of fame and a spiralling drug habit. He would spend several years holed up on Los Angeles’ Chateau Marmont hotel, strung out on heroin, before cleaning up and rejoining the Chili Peppers in 1998. Kiedis’s own battle with his demons was far from over- he would fall back into heroin use several times over the next few years.

In 1997, girl group All Saints gave the song a sleek pop makeover. Shifting the emphasis of the song from drugs to an errant boyfriend, they changed the reference to “the city of angles” to the more perplexing “The city of cities”, demonstrating how unwise it was trying to separate the song from Kiedis’s life.