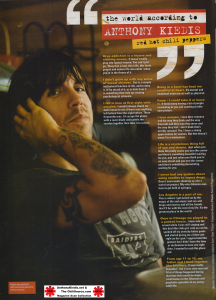 The world according to

Drug addiction is a bizarre and cunning enemy. It doesn’t really plug into logical reason. You can’t just go, ‘Okay, this is bad, this kills, this hurts people and makes life miserable’ when you’re in the throes of it.

I didn’t grow up with any sense of sexual shyness. Sex is a simple and natural function of life, and to deny it, or be afraid of it, or to hide from it is something that ends up causing psychological ailments,

I fell in love at first site with cocaine. I would always check my dad’s house to see if there was anything left from the night before.  There frequently was. I’d scrape the plates with a razor blade and cobble the residue together then take it to school.

Being in a band has kept me young at heart. It’s mental and emotional exercise as well as physical.

Fame- I could take it or leave it. It feels funny having a lot of people screaming at you and wanting to take your picture.

I never had any qualms about using needles to ingest drugs. Once I even made shooting up into a weird art project. My only dilemma was how to get hold of syringes.

Los Angeles is a part of me. This is where I got turned on by the magic of life and music and sex and drugs and movies and all the friends that I’ll be with for the rest of my life. It’s the greatest place in the world.

Once in Chicago we played to a packed house. I dove into the crowd while I was still singing and his hot little club girl, cute as can be, yanked off my stretchy fabric pants and started giving me a blow-job right on the spot. I appreciated the gesture but I didn’t have the time or inclination to have sex right then, I wanted to rock the place out.

From age 11 to 16, my father and I lived like brothers. It was really beautiful- but it was also very sad.  A lot of things happened during that time that would be major contributors to the illnesses and psychotic episodes of my young adult life.