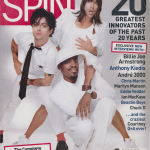 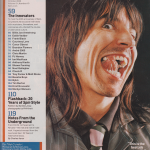 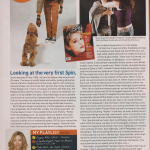 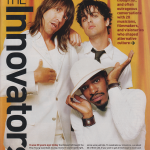 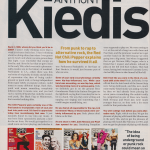 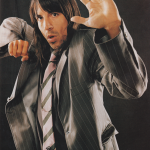 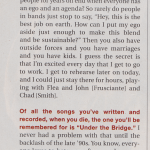 Many thanks to Iva at Invisible Movement for so generously providing & sending me a copy of the magazine. Thanks to Kathie Davis for the transcript.

From punk to rap to alternative rock, the Red Hot Chili Pepper explains how he survived it all

Back in 1985, where did you think you’d be in 2005?  I wasn’t really thinking more than a week in advance back then.  I wasn’t thinking about anything other than where I was gonna get my lunch and where we were gonna sleep that night.  I can remember that energy we lived by, and I love the fact that we got to exist in the early ‘80s, which was such a phenomenally creative era in the history of mankind.  Particularly in L.A.—when there was this real sense of originality in music and all forms of expression—the idea of being underground or punk rock, or being independent from major labels or popular culture, could mean so many different things.  Back then, punk rock meant something completely different than it means now, and you had such a variety of bands that could be considered punk, like Black Flag or Minutemen, that sounded nothing alike.

The Chili Peppers were certainly one of the first bands to incorporate a love of soul and funk into punk rock.  It’s hard to appreciate today how revolutionary that was.  It just naturally found its way into our music.  It was born from spontaneity and just a love for the art form.  We would get together in a small room and start playing, and whether it was Parliament/Funkadelic or Bar-Kays or Jimi Hendrix, it would just become part of who we were.

Some of your early vocal phrasings certainly were hip-hop-influenced, too.  While your band was ascending, so was hip-hop, which was becoming more of a serious genre.  Yeah, we definitely got in on the ground floor.  Grandmaster Flash & the Furious Five gave me the lightbulb, saying that it was okay for me to be in a band.  The way they were writing and rapping and singing was something that I could imagine myself doing, too.

Do you feel at all responsible for the rap-rock movement?  Many of those bands were certainly influenced by you.  Yeah, please don’t blame us for that.

At one show in 1991, both Nirvana and Pearl Jam opened for you.  Smashing Pumpkins were supposed to play too.  We were coming to L.A. at the end of a long tour with them and Pearl Jam, and the promoter wanted us to get another band on the bill because we were going into a big arena.  And when I suggested that we get Nirvana, Billy Corgan, who is a friend that I respect and admire, refused to play on the bill with Kurt Cobain.  They had issues, having both romanced Courtney [Love].  And so Billy chose to take himself off the bill.

Did you feel like you were in the thick of a cultural shift at the time?  Yeah, definitely.  It was official that the hair bands of the Sunset Strip were being dethroned, and this new, much more reality-based music was taking over.  But by then we had already been playing for seven years or something.  We couldn’t really be categorized as one of these new bands.  Both Nirvana and Pearl Jam were much younger than us, so they took a lot more credit for that particular shift.

“The idea of being underground or punk rock could mean so many different things.”

Heroin was the poison in the machine of alternative rock in the early ‘90’s.  And while the music probably liberated millions of people, the drug took many others into really dark places.  You are certainly one of the survivors.  What was the secret to keeping the band together thru it all?  I don’t know that there’s a secret.  A lot of different things need to happen.  First of all, you have to not die.  As far as the band goes, when people burn that brightly and that intensely, it’s nearly impossible to maintain over a long period of time.  How are you going to get along with two or three or four other people for years on end when everyone has an ego and an agenda?  So rarely do people in bands just stop to say, “Hey, this is the best job on earth.  How can I put my ego aside just enough to make this blend and be sustainable?”  Then you also have outside forces and you have marriages and you have kids.  I guess the secret is that I’m excited every day that I get to go to work.  I get to rehears later on today, and I could just stay there for hours, playing with Flea and John [Frusciante] and Chad [Smith].

Of all the songs you’ve written and recorded, when you die, the one you’ll be remembered for is “Under the Bridge.”   I never had a problem with that until the backlash of the late ‘90s.  You know, everyone loves to hate you after you do something you get recognized for.  At the time, a lot of people who were posturing to be hard were putting us down for “Under the Bridge,” and it game me pause to go, “Eh, I don’t know [about this song].”  But after that passed, I realized it was one of the best songs we’ve ever written.

Do you have any regrets?  You’ve lived down the sock-on-the-dick thing, thought maybe that wouldn’t necessarily be a source of regret.  There are times I listen to our early music, and I regret that [original guitarist] Hillel Slovak didn’t get to live longer to see where life would have take him, but I know that was just his course in life, to be a short-timer.  I pretty much accept most of the things that have happened.  Even the abominable things, even all the time I wasted and the years of nonproductivity.  They all kind of added up to mean something. — MARC SPITZ