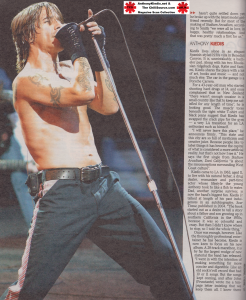 Kiedis lives alone in an elegant Spanish-styled 1930s villa in Benedict Canyon. It is, unmistakably, a bachelor’s pad. Along with his two Rhodesian Ridgeback dogs, Katie and Sammi, Kiedis shares the place with a lot of art, books and music- and not much else. The car in the garage is a Porsche Carrera.

For a 43-year-old man who started shooting hard drugs at 14, and once complained that in New Zealand “there wasn’t enough cocaine in a small country like that to keep me satisfied for any length of time”, he is looking good. The muscly torso beneath the tight white T-shirt and black jeans suggest that Kiedis has swapped the crack pipe fort the gym- a very LA transition for an LA enthusiast such as himself.

“I will never leave this place,” he announces firmly. “This state and the city are so full of mysticism and creative juice. Because people like to label things it has become the capital of what is considered a more artificial reality, but that’s not how I see it.” He says the first single from Stadium Arcadium, Dani California “is about the misconceptions surrounding West Coast culture.”

Kiedis came to LA in 1963, aged 11, to live with his natural father, a drug dealer, womaniser and part-time actor whose lifestyle the young Anthony took to like a fish to water. Dad, another surprise survivor, is now the band’s biggest fan. Kiedis Jr talked at length of his past indulgences in an autobiography, Scar Tissue, published in 2004. “The book started out as a desire to tell a story about a father and a son growing up in Southern California in the 1970s, because it was so colourful and crazy. But then I didn’t know where to stop so I told the whole thing.”

Once was enough, however. Like the through professional entertainer he has become, Kiedis is now keen to focus on his new album. A 28-track marathon, it is by far the largest wodge of new material the band has released. “I went in with the intention of making something far more concise and digestible. Like an old rock ‘n’ roll record that had 10 or 11 songs. But the songs kept coming, and after (John Frusciante) wrote me a ten-page letter insisting that we kept them all, I knew there was no point in having an unhappy John in the band, ‘Cos that’s who we lost him in 1992.”

For a man who has often referred to himself as a “control freak” this sounds very accommodating, particularly give the oodles of extra space allowed on Stadium for Frusciante to wig out with his guitar solos.

“There was a lot less friction this time than on any of our other albums. On By The Way there was a lot of bickering, a lot of struggling to dominate the writing board. Which is stupid as we know our greatest value is as a team. I really feel that the stars aligned for us on this new record. There was a definite and perceptible love in the room driving us forward. The universe has tested us in every possible in the past. This was payback time.”

Note: only the one page scan featuring Anthony Kiedis has been uploaded here; if you would like to read the rest of the article including the interviews with the other band members, it’s all on The Chili Source