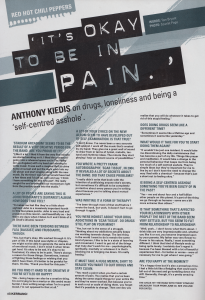 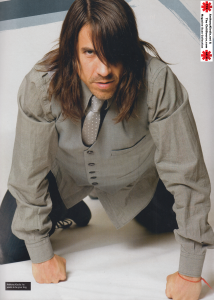 Anthony Kiedis on drugs, loneliness and being a ‘self-centred’ asshole.’

‘STADIUM ARCADIUM’ SEEMS TO BE THE RESULT OF A VERY CREATIVE PERIOD FOR THE BAND. ARE YOU PROUD OF IT?’

“I like it a lot. I liked it from the very first minute we started working on it. I liked the process of going into a rehearsal space out in The Valley [in Los Angeles] with my band and starting to write music. It was such a magical thrill to drive home at sunset and put the day’s work into my CD player and start singing along with the new music. By the time I was home I would have had a few ideas and I’d call up John and say, ‘I think I have something for this new part’. We really caught fire and snowballed our momentum right from the practice space into the studio.”

A LOT OF PEOPLE ARE SAYING THIS IS JOHN FRUSCIANTE’S [GUITARIST] ALBUM. HOW DOES THAT FEEL?
“It makes me feel like they’re a little short-sighted. John is a massively important fourth in this four-piece puzzle. John is very loud and present on this record – and beautifully so – but there are days when I listen to it and I think of it as Chad’s [drums] record.”

THERE HAVE BEEN TENSIONS BETWEEN FLEA [BASSIST] AND FRUSCIANTE, THOUGH.
“Yes, but that’s okay. We worked through it. It’s part of life. If this band was idyllic or Utopian, we might not be able to generate the same kind of emotional music. I don’t mind it when times get hard. It’s okay to be sad, it’s okay to be frustrated, it’s okay to be in pain. There’s always a reason for those things. Sometimes, instead of fighting those feelings or wishing that you didn’t have them, it’s better to be grateful for them. It’s like, ‘Thank you God for this pain’.”

DO YOU FIND IT HARD TO BE CREATIVE IF YOU’RE SETTLED OR HAPPY?
“No – being happy can also be a creative thing. I’m not trying to be a martyr or this weird muse hunter. I love writing songs when I’m in a good mood, I’m not opposed to that at all.”

A LOT OF YOUR LYRICS ON THE NEW ALBUM SEEM TO HAVE DEVELOPED OUT OF SELF-EXAMINATION. IS THAT TRUE?
“I don’t know. I’ve never been a very accurate self-analyst. I work off the music that’s created by my band. They give me a great wall of sound to draw from in terms of lyrical, melodic, textural and rhythmic ideas. The minute they start playing I hear an instant source of possibilities.”

YOU WROTE A PRETTY FRANK AUTOBIOGRAPHY, ‘SCAR TISSUE’, IN 2004. IT REVEALED A LOT OF SECRETS ABOUT THE BAND. DID THAT CAUSE PROBLEMS?
“I really didn’t write that book with the intention of publicising anyone else’s secrets, but sometimes it’s difficult to be completely protective about every person you’re writing about because you’re talking about mutual experiences.”

WAS WRITING IT A FORM OF THERAPY?
“I’ve been through most of that stuff before I wrote the book, but yeah, it doesn’t hurt to go through it again.”

YOU WERE HONEST ABOUT YOUR DRUG ADDICTIONS IN ‘SCAR TISSUE’. DO DRUGS STILL PLAY ON YOUR MIND?
“Yes, but not in the sense of a struggle. Thinking about my addictions actually keeps me working towards change. The last thing in the world I want to do is remain the same kind of person, I like to be in a state of learning and movement. I want to get rid of the things that truly don’t work for me – psychologically, spiritually, mentally or whatever it is that’s blocking me or bringing me down. It’s really freeing.”

IT MUST TAKE A HUGE MENTAL SHIFT TO REALISE YOU WANT TO QUIT DRUGS AND STAY CLEAN. “You reach a point when you feel a certain amount of pain. You realise that you’ve been doing the same stupid things for your entire life and they’ve never worked. But because you’re in such a rut or cycle of doing them, you forget that it’s possible to change. Then one day you realise that you will do whatever it takes to get rid of this stupid feeling.”

WHAT WOULD IT TAKE FOR YOU TO START DOING THEM AGAIN?
“It wouldn’t be just one incident. It would take me discontinuing the daily maintenance that has become a part of my life. Things like prayer and meditation. It would take a change in the personal behaviour that keeps me from being too much of a self-centred asshole. They’re simple ideas but they’re important for me to live by so I don’t have the need to change the way I feel with a chemical – because that’s just a short-cut to feeling okay.”

IS BEING A SELF-CENTRED ASSHOLE SOMETHING YOU’VE BEEN GUILTY OF IN THE PAST?
“Yes – me and about four and a half billion other people on this planet. It’s part of the thing we go through as humans – some are a bit more extreme than others.”

IS THAT SOMETHING THAT’S AFFECTED YOUR RELATIONSHIPS WITH OTHER PEOPLE? THE REST OF THE BAND SEEM VERY SETTLED, BUT YOU SEEM TO FLIT FROM RELATIONSHIP TO RELATIONSHIP. “Well, yeah… I don’t know what that’s about. I think kids are very impressionable and, whether you like it or not, you become impressed upon by your parents. My father was very flower-to-flower in his nature. Really, I want something different. I think that kind of lifestyle ends up being quite lonely. I certainly don’t regret it because I’ve been blessed with a lot of beautiful experiences that – for better or worse – were all necessary for me to get where I was going.”

ARE YOU HAPPY AT THE MOMENT?
“It’s a happy time but it’s also a precarious time I feel a little bit like a fledgling that could easily fall out of the nest and go tumbling down the cliff. Generally, though, it’s a pretty amazing time.”

THE CHILIS HIT THE ROAD WITH THEIR ‘STADIUM ARCADIUM’ TOUR FROM JUNE 30.