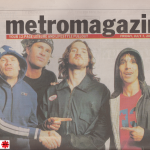 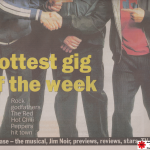 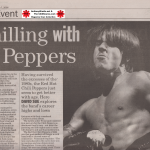 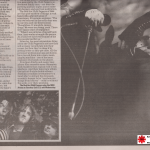 Hottest Gig of the Week

Chilling with the Peppers

Having survived the excesses of the 1980s, the Red Hot Chili Peppers just seem to get better with age. Here DAVID SUE explores the band’s career highs and lows

HAD you told any music fan in the mid-80s that the Red Hot Chili Peppers would not only still exist in 2006, but that they’d be America’s greatest modern rock export, they’d most likely have called you a fool.

Yet, having said that, playing the fool is something that certainly hasn’t dented the career arch of the Red Hot Chili Peppers. This is, after all, a band who began their career playing in Californian strip joints with only socks covering their genitalia.

Ever since, they’ve managed to outlast trends, drugs, madness, seven guitarists, nervous breakdowns and oven one death (of founding guitarist Hillel Slovak, from heroin, in 1988).

But the story of the Chili Peppers is loss to do with dogged survival and much more to do with the world eventually coming round (some 20 years on) to their way of thinking.

Witness the way in which the band headlined London’s Hyde Park two years ago, with some 50,000 fans, young and old, pogoing along to the band’s vigorous metal-funk noise.

A whole new generation of guitar hands are queuing up to pay tribute to the Peppers (although the less said about All Saints’ sanitised cover of Under The Bridge, the better).

In 2006, the band are rightly exalted and vindicated as metal godfathers. And yet, these California rockers have never really lost their sense of inner child.

“We originally set out to be complete and utter utter perpetrators of hardcore, bone-crunching mayhem sex things from heaven,” says frontman Anthony Kiedis.

“Even 20 years later I still hold onto, those ideals very fondly. We go out onto that stage and play for the vet v same reasons.”

The Chills have avoided the traditional rock fate (band take drugs, mess up, make bad albums, clean up, but are creatively spent), by coming back to what they know. And a large part of that lies with guitarist John Frusciante.

The wayward, but genius, guitar player left the band for six years due to a drug addiction problem, but rejoined in 1998 to revive the band’s fortunes with their comeback Californication album.

The newly-sober Frusciante ushered in a new era for the Chili Peppers as abstinent family men – out went the partying and late nights and in came tofu burgers and spiritual meditation.

The Red Hot Chili Peppers of 2006 are that post-modern of things: a rock band with a shrewd sense of conscience. Frusciante explains: “The way we behaved in the early days was so careless and one-dimensional. Thoughtless. It was girls, money, drugs. We were too young, yeah. There many years of negligence.

“When I see pictures of myself back then I just wanna strangle the person. As a band we survived because of the love people had for us.”

However, the most miraculous thing about the Chili Peppers is not how they sell so many records late into their career, but how they’ve done it by getting better as they get older. All the personal/professional ups and downs have turned them into a lean, mean gigging machine – one of the most explosive live bands on the planet.

Front man Kiedis and manic bass player Flea resemble more Olympian body builders than typical rock’n’roll playboys. And their latest new album (an epic sci-fi-style double album) Stadium Arcadium is testament to a band who’ve still got the deranged, eccentric hunger to be “mayhem sex things from heaven” – with or without the socks over their genitalia.