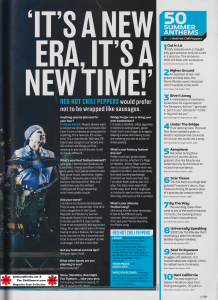 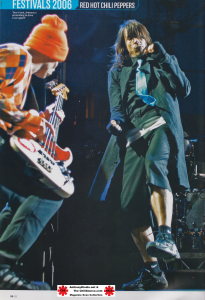 RED HOT CHILI PEPPERS would prefer not to be wrapped like sausages.

Anything special being planned for your tour?

Anthony Kiedis: People always want to know how shows will compare. But I don’t think of shows as compared to anything. It’s a new era. It’s a new time. It’s a new record. We have 28 brand new songs on our record and 20 of them are things we’ll be weaving in and out of the set. It will be totally different.

Last year, I went to see Bauhaus at Coachella. I never saw them in their glory years, but I was shocked to see how good music used to be. It gets forgotten, because pop music has become the face of the ‘80s, but there was this brilliant underground thing happening which was totally unique.

I’ve had a lot of personal disasters. They’re easy to remember. One time I did a stage dive in the Czech Republic and broke my sacrum [triangular bone in the lower back]. It sounds painful? It was horrible. I had to be wrapped in this big corset thing. Four days later I was in Finland having to play a festival. All I wanted to do was dance like a banshee and I had to stand there wrapped up like a sausage. I felt like a real idiot.

Got any festival survival tips?

What other bands are you planning to see?

I’m looking forward to seeing!!! We’re playing with them.

One song should never dominate. It has to be different every summer. What would I chose from last year? Bone Machine, the Pixies song.

Early sessions were so fraught they gave produced Andy Gill a turd in a pizza box. This embryonic effort still fizzes with exuberance.

An explosion of wah-wah guitars and slap bass; this Stevie Wonder cover introduced John Frusciante to the world.

A masterpiece of machismo, toned down for a guest spot on The Simpsons Red Hot Chili Peppers the line “I got to get it, put it in you” ditched for “I’d like to hug and squeeze you.”

Their defining track. Produced Rick Rubin spotted a poem in Kiedis’s notebook and convinced him to turn the words into a song.

Recorded during Dave Navarro’s ill-starred stint as guitarist, One Hot Minute was redeemed only by this tribute to musical transcendence.

The pounding, bass-driven verse is one of the band’s heaviest moments; the towering chorus one of their most anthemic.

2002’s By The Way saw them developing a talent for intricate, Beatles-inspired melodies.

Dealing with Kiedis’s struggles with addiction, this hushed ballad was originally written for oddball movie Coneheads.

The lead single from Stadium Arcadium sees them finding extra gears, 20 years in.

RHCP were also featured several times in the the
magazine 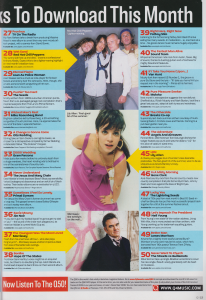 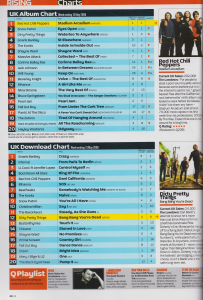 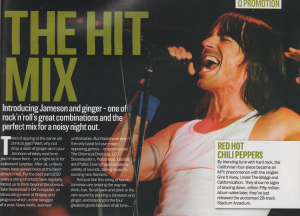 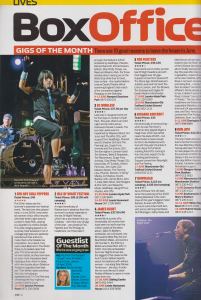 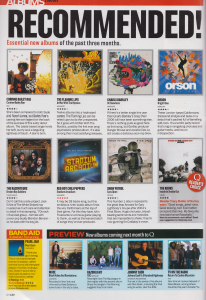