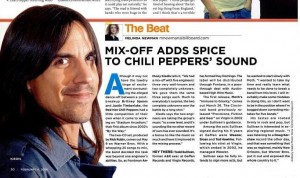 Although it may not have the tawdry tinge of excitement surrounding the alleged dance-off between a post- breakup Britney Spears and Justin Timberlake, the Red Hot Chili Peppers had a little competition of their own when it came to working on “Stadium Arcadium,” their first album since 2002’s ‘By the Way.’

The two-CO set, produced by Rick Rubin, comes out May 9 on Warner Bros. With a whopping 25 songs to mix, the band decided the task was beyond one engineer’s ability. So, as frontman Anthony Kiedis tells it, “We had a mix-off with five engineers; three very well known and two completely unknown. We gave them the same three songs each. Much to everybody’s surprise, the two complete unknowns won the battle by a long shot.

Kiedis says the two engineers are taking the group’s music “to a new level, and it’s sounding like no other record of ours has ever sounded. It’s a bonus to like the music so much and have it improved in the mixing process.’

(Remainder of article isn’t about RHCP).