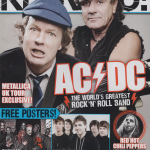 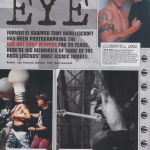 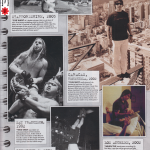 FORMER K! SNAPPER TONY WOOLLISCROFT HAS BEEN PHOTOGRAPHING THE RED HOT CHILI PEPPERS FOR 20 YEARS. HERE’RE HIS MEMORIES OF SOME OF THE ROCK LEGENDS MOST ICONIC IMAGES.

“THIS WAS taken at the Big Day Out festival, which both the Chilis and the Foo Fighters were playing. Anthony didn’t want to be photographed until after he’d come off stage, and Dave Grohl had to be up at 5am the next morning to catch a plane. But being the good guy he is, Dave waited around so I could get this shot.”

“This is the Chilis playing at Woodstock II. The whole festival was a mess, and they were the last band on- the only band I got an Access All Areas pass for! The members only lasted two songs with the lightbulbs on their heads- it was just too hot in there for them to keep on.”

“This IS Flea playing at a festival in Belgium. I don’t know where he got the mask from, but suddenly he had it on, and I was on hand to take the picture. Immediately after this he stripped off and played the rest of the set stark naked!”

“FOR WANT of a better phrase, this is a picture of John Frusciante twiddling with his knobs! This was taken at the V Festival in Staffordshire in 2003. I like this shot because of the access I got. It’s very unusual for a photographer to get the kind of access to a band that I’ve had with the Chilis all these years.”

“THIS SHOT really doesn’t do justice to how far from the ground Anthony was when I took this picture. What you can’t hear is the other members of the band screaming for him to come back, because the only thing between him and the ground is chicken wire. This shot was taken on the roof of the Gran Melia Hotel, the band had just ridden in by helicopter.”

“THIS SHOT was taken at the second date of the second Lollapalooza tour. At the end of the set the members of the Boo Ya T.R.I.B.E. came on the stage and one member lifted Anthony up and kept him up there for the entire song.”

“THIS WAS taken at the Hummingbird in Birmingham on the Blood Sugar Sex Magik tour. I’d heard that things weren’t that great with the band, and that John Frusciante was becoming more and more distant. It also didn’t help that the Chilis had the Rollins Band supporting them, who will make you look bad if you’re not on the top of your game.”

“WHEN THE band were recording By The Way, I got the call to go out and take some shots. Anthony Kiedis decided that he wanted to record his vocals at the [legendary Hollywood hotel] Chateau Marmont. This is a picture of him writing the lyrics to Venice Queen, while producer Rick Rubin takes it easy.”

TONY WOOLLISCROFT’S BOOK, ME AND MY FRIENDS: RED HOT CHILI PEPPERS, WILL BE PUBLISHED ON OCTOBER 24.