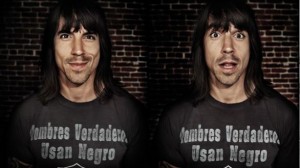 Presidents, kings and dictators make proclamations that their subjects must obey, but celebrities make presidents, kings and dictators. And, while heads of state can be strictly adhered to, their authority is usually only as strong as the army behind them. Conversely words spoken into a microphone by a sweaty human backed by four or five other sweaty and generally harmless individuals armed with nothing more than guitars, keyboards and drums are willingly followed more than any monarch or politician in our time. There is probably no more powerful voice in our world than that of a rock star.

Imagine the temptation for a rock star to play Simple Simon with 50,000 people. Simon says, “Put your hands in the air.” Simon says, “Twist and shout.” Simon says “Vote for John Doe.” Come on, we’ve all been victims of Simon’s voice while very few have actually stood in his place. Anthony Kiedis, the front man of the Red Hot Chili Peppers, understands the game better than most of us. He has moved millions with a punk, funk hip-hop sound that he helped create about two decades ago.

And while that sound has essentially remained the same, it has been refined. It, along with him and his band mates, have matured, dried out and hit richer, fuller notes that convey a more meaningful dialogue fueled on raw adrenaline and, once, other intoxicants. This has been followed by the great and strange discovery of self. The road to utopia is fraught with sorrow and littered with bottles and pipes and damage and friends, but the toll need not be extracted forever. For Kiedis and The Peppers it is time to move on emotionally, spiritually and musically. But if you unwrap their latest CD, don’t expect it to contain a sleepy medley of hypnotic mantras. There is still enough energy to light a city, any city, your city. But it’s a controlled energy this time around, and one that can nearly guarantee a safe landing.

Risen Magazine: What are your earliest memories of hearing music?

Anthony Kiedis: Wow, it was definitely a very emotional experience from the beginning. Although I wasn’t conscious of finding any particular music, the music that found me, whether I was riding around in the car with my mother or hanging out in the basement making model cars with my friends, whatever seeped in, there were things that definitely spoke to me and got me into that fantasy world and made me a little crazy, in a good way. A lot of it was from the 60s and 70s, when I was a little boy listening to AM radio. That’s what was piped into my life. So, Raindrops Keep Falling on my Head was a song that I would hear on my way to school and I would sing it over and over. Then I remember getting hit with Wings when I was in fifth and sixth grade.

I went out and actually bought a 45 which was Neil Young’s Heart of Gold and I played it on this white, plastic turntable that I had in my bedroom. I would sit there and play it over and over and over and I just felt it. The ironic thing about that was later in life I would be completely against Neil Young for a period of time. Where he just seemed like the most boring, crusty, slow hippie, the opposite of everything I wanted to be about when I was a punk rocker. I went to see a movie he made called Rust Never Sleeps and I actually fell asleep. And I thought, Oh that’s just some really forgotten dinosaur music that’s not for me. Cut to about three or four years later, I fell so deeply back in love with the music of Neil Young that it affected my whole life. And I started discovering each one of his records and going through each of his songs, and seeing what an ultra-inspired, super genius of sound this guy was, which seems funny to me since that was the first record I got, then I hated it, then I thought it was the greatest thing ever.

RM: Maybe older musicians are parental to younger musicians in a way. Like Mark Twain said, “When I was 14 years old my old man was so ignorant I could barely stand to have him around, by the time I turned 21, I was amazed by how much he’d learned.”

AK: [Laughs] Going against things was a big part of the experience, because I didn’t so much have the parental part to rebel against. It was awkward for me cuz my father was a rebel and it’s hard to rebel against a rebel. I didn’t grow up with the straight-laced kind of square, no-musical-taste kind of father. I grew up with a dad who was an outlaw and a gangster and a criminal and had impeccable taste in music. I grew up listening to people like Roxy Music and The Ramones and Debra Harry and Led Zeppelin, The Who, a really interesting selection of great music. My house was full of posters of The Who and Andy Warhol stuff. Rebelling against him would have been like getting into Journey, [Laughs] which I couldn’t do cuz they were too popular, and anything too popular… I had a weird sort of ego disorder where I didn’t want to be like anyone else, especially the popular masses. Later I discovered that can be more of a pain in the ass in the long run. Again, it was an important part of the process.