Appetite for Destruction by Mick Wall 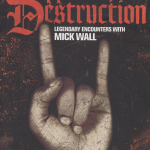 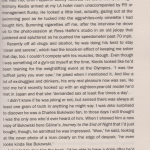 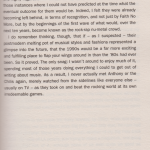 An interview with Anthony Kiedis is featured in this book by British rock journalist Mick Wall. The actual interview ran in Kerrang! in June 1990 but was republished in the book with an added introduction and a coda.

Still largely unknown outside of hip circles, it was a good time to meet the Red Hot Chili Peppers. Barely famous, let alone rich yet, singer Anthony Kiedis arrived at my LA hotel room unaccompanied by PR or management flunky. He looked a little lost, actually, gazing out at the swimming pool as he tucked into the egg-whites-only omelette I had bought him. Bumming cigarettes off me, after the interview he drove us to the photo-session at Ross Halfin’s studio in an old jalopy that juddered and spluttered as he pushed the speedometer past 70 mph.

Recently off all drugs and alcohol, he was doing his best to stay ‘clean and serene’, which had the knock-on effect of keeping me sober Nat day, too. I couldn’t compete with his muscles, though. Even though I was something of a gym-rat myself at the time, Kiedis looked like he’d been training for the weightlifting event at the Olympics. ‘I was the buffest junky you ever saw,’ he joked when I mentioned it. And like a lot of ex-druggies and drinkers, his only real pleasure now was sex. He told me he’d recently hooked up with an eighteen-year-old model he’d met in Japan and that she ‘demanded sex at least five times a day’.

I didn’t know if he was joking or not, but sensed there was always at got one grain of truth in anything he might say. I was also surprised to discover he was a Charles Bukowski fan. In those days I still thought I was the only one who’d ever heard of him. When I showed him a new copy of Bukowski hero Celine’s Journey to the End of Night that I’d just bought, though, he admitted he was impressed. ‘Wow,’ he said, looking at the cover photo of a man clearly on the edge of despair, ‘he even looks kinds like Bukowski.’

I decided to give him the book. I’d be able to have a drink after he’d gone; he would only have the book to read. (And the model to fuck, but he made that sound like a chore.) He gave me a CD of a group called to Digital Underground. I decided he was the nicest, most down-to-earth and – just possibly – most honest American rock star I’d met in a long time. Possibly ever.

The Red Hot Chili Peppers are now, rightly, one of the most successful and highly regarded rock artists in the world. Yet this is another one of those instances where I could not have predicted at the time what the eventual outcome for them would be. Indeed, I felt they were already becoming left behind, in terms of recognition, and not just by Faith No Mere, but by the beginnings of the first wave of what would, over the next ten years, become known as the rock-rap nu-metal crowd.

I do remember thinking, though, that if – as I suspected – their postmodern melting pot of musical styles and fashions represented a glimpse into the future, that the 1990s would be a far more exciting ad fulfilling place to flap your wings around in than the ’80s had ever been. So it proved. The only snag: I wasn’t around to enjoy much of it, spending most of those years doing everything I could to get out of writing about music. As a result, I never actually met Anthony or the Chilis again, merely watched from the sidelines like everyone else – usually on TV – as they took on and beat the rocking world at its own irredeemable games.