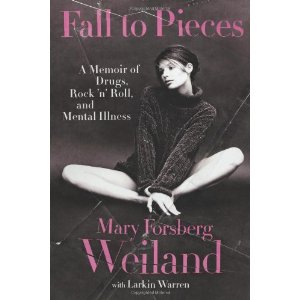 “There are people you meet who enrich your life; there are people you meet who steal parts of your life. And there are people you meet who, in one way or another, save you. Or, maybe more important, help you save yourself. One night at Brent Bolthouse’s birthday party, I was introduced to Anthony Kiedis, the front man for the Red Hot Chili Peppers, and we had a sweet, funny chat in the kitchen. I knew the band’s music, and we spent nearly two hours talking about movies, too. The next day, Anthony called Guy and told him he’d met a girl and was trying to find her. “She was staying here with me” Guy said, laughing, “but she left today to go back to New York”.

“The key to a long-lasting & deep friendship with a rock star is never ever kiss them. Musicians are used to getting what they want. If you don’t give it to them, they’ll stay around till you do. What can happen during this time is that, as God is my witness, you can become friends.”

“The first time Anthony called, I thought it was Guy tricking me. We spoke on the phone quite a bit and then he flew to New York where I was staying in a models’ apartment near the Empire State Building. When Anthony arrived, I answered the door wearing a white T-shirt on which I’d painted the word “trouble” with red nail polish. Attention, men: This is a girl’s way of advertising the kind of girl she is. The plan for the evening was to meet Rick Rubin, the Peppers’ producer, for dinner”

” When we got down to the sidewalk, Anthony had a slight look of horror on his face. Our chariot was a block-long stretch limo. He apologized for the ridiculousness of the car and for being the opposite of rock. That was the beginning of our friendship”.

” And no, I never kissed Anthony. We became close loving friends. A few years later, he would be a major part of my addiction recovery. Had we never met, I don’t know how or if I could’ve eventually found my way. Anthony often drove me to twelve-step meetings, and we stayed in touch through my various attempts at sobriety. Just hearing his voice over the phone gave me enormous hope on the darkest days- I knew that he’d been where I was and that he’d found a way out”.

” What I didn’t know was that during the times that I thought he was working on tour, he was still struggling with his demons. It wasn’t until I read “Scar Tissue” that I understood that all the while Anthony was being my true friend, his own soul was being badly shaken”.

“Whenever I was in New York, I spent long, wonderful hours with Anthony Kiedis. We’d head for Tower Records, where he piled me up with music I didn’t know and bands I’d never heard of. We walked through the flea markets in Chelsea on weekends and bought silly stuff, and we were always engaged in Anthony’s endless search for the perfect French toast.

One September night in 1993 we went to Saturday Night Live, where the host was the massive basketball star Charles Barkley and the musical guest was Nirvana, who performed “Rape Me” and “Heart Shaped Box”. After the show, we went backstage, where I met Courtney Love and Kurt Cobain for the first time. I’d never seen eyes like Kurt’s – they were electric blue. After watching the live performance, it was hard to believe this reserved, sweet man had been the man onstage.

Early on the morning he was suppose to pick me up, the phone rang. Anthony’s voice, quiet and incredibly sad, was on the other end.

“We cant go to the game today, Mary”, he said. I admit I was disappointed. “What’s wrong?” I asked. “My friend died last night” he told me, his voice getting even smaller. The night before, River Phoenix had died of an overdose, on the sidewalk just outside the Viper Room in Los Angeles.

Reportedly, a mix of speed and heroin — a combination known as a speedball —sent him into convulsions and stopped his heart. As brilliant an acting career as River was predicted to have, he was also considered to be a gifted musician and composer. Anthony’s heart was broken, and he wasn’t alone.

Every time a community suffers a loss like that (no matter if it’s a public figure or someone known and loved in private life only), we all take the vow to learn the lesson and do better. It won’t be in vain, everybody whispers. But everybody’s usually wrong. Six months later, Kurt Cobain was dead, too.

Thanks to: Tina Priddy Mckim for the transcript.