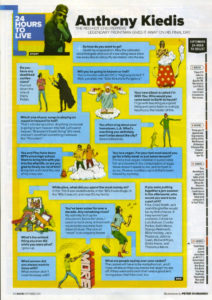 LEGENDARY FRONTMAN GIVES IT AWAY ON HIS FINAL DAY

So how do you want to go?

Death by evaporation. May the saltwater wind that gets shot out of a barreling wave blow me away like an old puffy dandelion into the sky

Will you be going to heaven or hell?

You’re familiar with AC/DC’s “Highway to Hell”? Well, consider me ‘Side Streets to Purgatory,”

Do you have any deathbed confessions?

I turned down the role of Harry. Potter.

Which one of your songs is playing on repeat in heaven? In hell?

That’s a brutal question. Anything on repeat is going to turn heaven into hell. Let’s send heaven “Brendan’s Death Song” (it’s new), and we’ll send hell something mellower, like “Porcelain.”

Your new album is called I’m With You. Who would you come back to Earth to haunt?

I’ll go with haunting as a good thing and come back to lovingly haunt you, the reader of this.

You often sing about your hometown, L.A. What’s one thing you definitely won’t miss about the city? Geico billboards,

You and Flea have been BFFs since high school. Want to bring him with you Into the afterlife, or are you glad to finally be rid of him?

Bring him with! And the rest of my crew. too,

You’re a vegan. For your last meal would you go for a fatty steak or just some tempeh?

I’m not a true vegan I dabble in sustainable fish and dawdle in the consumption of eggs. Steak doesn’t speak to me, and tempeh is so-so. I’ll savor a solitary apricot that’s been kissed by my baby.

While alive, what did you spend the most money on?

You’ve been sober for over a decade, Any remaining vices?

My sobriety isn’t up to discussion, but as for vices, I seem to hack away at them with my invisible machete from dawn till dusk. The vice of “more” is an ongoing theme.

What’s the wildest thing you ever did while you were alive?

What woman did you always want to sleep with?

What woman didn’t I want to sleep with?

If you were putting together a jam session In the afterworid, who would you want to be a part of it?

What are people saying over your casket? The casket will have to be metaphorical… and I hope whatever they say makes me laugh my ass off. If they wanna throw in that I was a good and loving papa, that’d be cool, too.