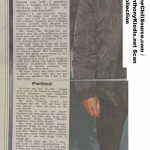 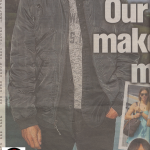 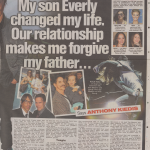 My son Everly changed my life. Our relationship makes me forgive my father…

AS the frontman of the Red Hot Chili Peppers, the world’s biggest band, Anthony Kiedis was also the wildest hellraiser in rock ‘n’ roll.

At 11, he lost his virginity to his dad’s 18-year-old girlfriend, first injected coke at 14 and nearly killed himself after driving his mum’s car into a tree at 90mph while drunk, leaving him with a smashed skull, a broken eye-socket and “looking like a plate of spaghetti and meatballs”.

Kiedis, a sex-obsessed heroin addict for years, was once fined more than £1,200 for sexual battery and indecent exposure after a female student claimed he’d dangled his privates in her face in the dressing-room after a gig.

But today, the 48-year-old sex symbol says his only addiction is his three-year-old son Everly Bear and that the youngster is keeping him on the straight and narrow.

Although clean of drugs and drink since 2000, Anthony says: “As every heroin addict will know, temptation is always there. But becoming a father has given me a reason to live and stay clean for good.”

He says: “Every day since has been a battle to stay clean, but my son makes me thankful that I am. I feel very lucky.”

And the star says his lad – named after one of his favourite bands, The Everly Brothers – also impacted positively on the Chili Peppers’ latest album, I’m With You.

He says: “Having Everly has changed my life. You can hear the new energy I have, we have, on the new album.”

Becoming a father has meant Anthony has reflected on his relationship with his own dad, actor and Hollywood drug dealer Blackie Dammett, born John Kiedis.

Not your average father, Blackie supplied drugs to and partied with rock stars including Led Zeppelin and The Who’s Keith Moon, movie icons and other celebrities, exposing Anthony to sex and drugs from a young age.

Anthony’s parents split when he was three and at 11 he moved from Michigan, where he had lived with his mum Peggy, to LA to live with his father. Just a few days later, his dad offered him his first joint of cannabis.

Then one night just before his 12th birthday, he arranged for Anthony, who was high on prescription drug quaalude, to lose his virginity with HIS girlfriend, an 18-year-old called Kimberly, in HIS bed.

But Anthony is forgiving. He smiles and says: “I know whatever my father did, in his own way, he still loved me.

“Even though we don’t communicate as fluently as I do with my son, he still has the same feeling for me that I have for my boy. And I should be a little more patient.”

Renownd in the industry for being a difficult interviewee, Anthony is surprisingly good-humoured, telling stories about how Everly is a bundle of energy and keeps him on his toes and laughing at how his young son also likes to sing.

He says: “I don’t know what songs he’s got in his head but he likes to make some noise!

“The fact my relationship with my son is so good makes me forgiving of my father and also appreciative.

“Now I can look back and say I actually like the upbringing I had and my father was very attentive and a great educator.

“He just didn’t have the same tools I have today and there was no way he could have acquired them at that point in time. So, yeah, I forgive him for his mistakes and I thank him for giving me so much of his time and energy.”

Anthony says reading Cormac McCarthy’s Pulitzer Prize-winning novel The Road – charting the journey of a man and his young son in a post-apocalyptic world – made him more understanding of his role as a father and of his relationship with his dad.

“I read that book within a month of my son being born which was quite magical for me and blew my mind,” Anthony explains.

Forgiven … Anthony Kiedis, seen here with dad Blackie, has come to terms with his own unusual upbringing

“It teaches you never to take a single thing for granted.

“There’s just an apocalyptic hell to survive through and you feel the love of that father for his son. Even though there’s nothing much to live for, except caring for someone.

“I love my son and will always be there for him and I know that’s how my dad feels today about me.”

Anthony admits he still struggles to find the right woman and properly settle down.

He split with Everly’s mother – model Heather Christie – in 2008 and although he has dated some of Hollywood’s most beautiful women, including supermodel Heidi Klum, actress Bijou Phillips and film director Sofia Coppola, he has found it difficult to get close to someone special.

He reveals: “I find it hard to meet the right woman as people assume I’m a certain type of person – which I’m not.

“It’s been hard. I meet people and they say things like ‘I’d never go out with someone like you, I know who you are’. But they don’t know who I am.

“I run into that a lot with people and so the tragic thing in relationships is that I never get a fair shake because of that preconceived idea of who people think I am. So I’m trying at all costs to avoid the pitfall of having the relationship based on ideas formed from my past.

“I hope someone can open their mind and rediscover who I really am rather than who they think I am.”

After 28 years with the Red Hot Chili Peppers – during which they have sold more than 65million albums, Anthony calls them “my other family”.

I’m With You is their first album in five years and Anthony is happy to be back with the band.

He says the year ahead will be a happy one with “lots of touring but enough breaks to allow them time to enjoy it and not get burned out”.

Anthony also admits there was some heartache in making this, their tenth album, when he lost a close friend, an event that inspired track Brendan’s Death Song.

It was written about Brendan Mullen, the owner of LA club The Masque, who died suddenly after suffering a stroke in 2009. Anthony says: “He was a very good friend and an important guy.

“All the LA punk kids who were disenfranchised from other forms of music at that time and wanted to tap into this other kind of music went to his club.

“He facilitated that and promoted it. That was his nature – to embrace cutting-edge music and give it a place to exist. So he was greatly admired and a very humble guy.

“He was the first person to listen to a Chili Peppers demo tape and he gave us our first gig. So we loved him for giving us that opportunity and it was the beginning of a long relationship. We miss him terribly.

“But through the dark times there has been plenty of joy and that’s why now life is all about celebrating.”

I’m With You is released in the UK on August 30.

ANTHONY’s tangled love life has included some of Tinseltown’s most beautiful women. In the past, he has dated Heather Christie, Heidi Klum, Bijou Phillips and Sofia Coppola.

HEATHER… the California-born model is mum to Anthony’s son

HEIDI… the supermodel had a short relationship with Anthony in ’02

SOFIA… the film director and Anthony were dating in the Nineties

Please note: Yes, we know there are several mistakes in this but it’s a good article despite that for the comments Anthony Kiedis makes about Blackie Dammett & Everly Bear

(The Sun is one of the lower end tabloid papers here in the UK; it features a topless model on ‘page 3’ and that is one of its main selling points here rather than its accuracy and standards of journalism… )