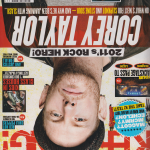 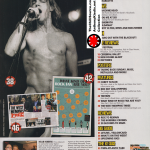 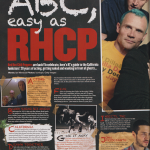 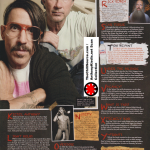 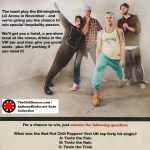 Red Hot Chili Peppers are back! To celebrate, here’s K!’s guide to the California funksters’ 28 years of acting, getting naked and wanking in front of ghosts…

Nice content with merely being rock stars, over the years Anthony Kiedis and Flea have appeared in numerous films. Most famously, Flea played a broken English-speaking nihilist in The Big Lebowski, while the singer featured as a drug dealer in surfer flick Point Break alongside Keanu Reeves.

Released in 1991, this was the album that made its authors so huge that from that point on they were visible from space. Featuring no less than five hit singles, the Chili’s fifth effort has sold well in excess of 10 million copies and has inspired more air-bassists than any other album in history.

Despite being born in Michigan, it is California that provides Anthony Kiedis and the Chili Peppers with not only their home but also their muse. The band immortalized the U.S’s most populous state in the song (and album) Californication. It’s also difficult to imagine them all prancing around naked while living in Alaska.

Not only stars of stage and film, the Chilis have also appeared in cartoon form, immortalized in the Love Rollercoaster video for Beavis & Butthead Do America, and also featured in The Simpsons, as part of Krusty The Clown’s comeback special. As the clown’s request, they even toned down the lyrics to Give It Away. The sell-outs…

Blood Sugar Sex Magik was recorded in a house once resided in by Jimi Hendrix and escape artist Harry Houdini, which the band soon discovered was haunted. Drummer Chad Smith refused to stay there, while John Frusciante reckoned the ghosts were friendly and, to the point where he had a wank in front of one.

Prior in to joining the Chilis, in the early 1980s, Flea was a member of Fear, one of LA’s most notorious punk bands. Led by the charismatic Lee Ving, Fear shows would often end in riots after the group had goaded the audience and sang songs with such charming lyrics as, ‘I just want to come in your face’.

The first single released from Blood Sugar Sex Magik, the video to Give it Away quickly became one of the most iconic clips of the 1990s. Directed by French fashion photographer Stéphane Sednaoui, the promo sees the band shot-in black and white, their semi-naked forms covered in silver paint. It’s all very arty and rather sexy too.

The Chilis have their dark side – and it doesn’t come much darker than heroin. Anthony Kiedis is a recovering addict, as is former guitarist John Frusciante. The latter’s problem became so serious that during his first period of absence from the band his debts to drug dealers stood at tens of thousands of dollars, and his personal safety was very much at threat.

Fancy jamming with a few mates¿ So did RHCP, so they roped in a couple of bands – including Rolling Stones’ Ronnie Wood – For the Insects, who performed live at the 2009 MusiCares event, which was held to honour Anthony Kiedis.

The best known of all the band’s guitarists, John Frusciante looked like Jesus, played like Hendrix and took so many drugs that all of his teeth fell out. He had not one but two spells with the band, hitting big with Californication and Blood Sugar Sex Magik, before leaving again in 2009.

Anthony Kiedis was a student at Fairfax High School in LA’s Melrose Avenue. There he met Michael Balzary, who soon enough the world would know as Flea. A singer and songwriter, actor, author, collector or art and courtside season-ticket holder for the Los Angeles Lakers basketball team, the Chili’s frontmen is very much the modern day renaissance man. And quite the rock star to boot.

When someone in a cartoon has a good idea, often a light bulb will go on above their heads. It’s very rare, though, that this happens in real life. But for their headline stint on 1994’s Lollapalooza caravan the band thought it a capital notion to perform while sporting giant light bulbs that shone from the top of their heads. An idea so good that literally a light went on.

The Red Hot Chili Peppers are a group that comprises two frontmen – one of them sings and the other plays the bass, sometimes with no clothes on. Famed for his virtuosity, Flea is also a capable trumpeter and aficionado of such jazz greats as Miles Davis and Dizzy Gillespie. Flea is also one of the world’s great shape-throwers.

In 1988 the Chili Peppers lost guitarist Hillel Slovak to a heroin overdose. He’d been an addict for a number of years, but had been working to get himself clean in his final months, tragically to no avail.

Some people keep cats, some people keep dogs, some people keep snakes. It’s takes a proper eccentric to keep a wolf as a pet, mind. But this is the beast that Anthony Kiedis has decided is the companion for him, which he named Howlin’ Wolf. So while ‘real men don’t eat coyotes’, it means they do keep wolves.

Before this month, it had been five years since we’d heard any new from the band. Evidently, they don’t have a problem with going quiet and taking their sweet time getting things done.

Uber-producer Rick Rubin joined the Good Ship Pepper for the Blood Sugar Sex Magik album, and every one they’ve made since. What Georg Martin was to The Beatles, so Rick Rubin is to the Chilis. Although, admittedly. George Martin never produced albums by Slayer or Metallica.

Although the title of a song on Californication, Scar Tissue here applies to the name of Anthony Kiedis’ scintillating tell-all autobiography, published in 2004. The sex, the drugs, the funk’n’roll… it’s all here. What’s more, the Hollywood Reporter, er, reported that the author is developing his story for a series to shown on the HBO cable television channel.

Durant an interview to promote Stadium Arcadium, Flea got so engaged at K! scribe Bryant’s line of questioning (concerning whether or not SA was a John Frusciante album) that he threw a bottle of water at him before storming out of his Claridge’s hotel suite ranting ‘you Limey bitch’. In a subsequent blog the four-stringer admitted that ‘the little Flea threw a tantry’.

This huge ballad may be the Chilis biggest song, but it’s also one of their darkest. The bridge in question is where their singer used to shoot speedballs – a sometimes lethal combination of cocaine and heroin – with LA gangster types. Think about that when you’re singing along and waving a lighter in the air.

As for Spinal Tap with drummers, so it is the Chilis with guitarists, having bad no less than eight six-stringers, some of them lasting less time than it takes to ask “what key is this in¿”. John Frusciante is the most famous, although Dave Navarro could probably get himself arrested if he tried.

In the early days, RHCP shared Hilled Slovak and ex-drummer Jack Irons with What Is This¿. After initially quitting the pair came back to RHCP just in time for their first taste of success. Which was lucky…

How big? Well, their total album sales are over 50 million worldwide, with Blood Sugar Sex Magik and Californication contributing over 15 million each to that tally. It’s unlikely you’ll have to shout Anthony Kiedis’ round in the pub anytime soon…

When the band wanted to dress up and wear a little more than just a sock on their wangs, they’ve been known to cover up and go onstage in their shreddies. If nothing else, it saves on laundry, at least…

The Zephyr Song from 2002’s By The Way has become one of the band’s biggest hits, and a cracker it is, too. And due to an error at the pressing plant some versions of the single are highly collective, fetching prices into three figures. And we’re not talking in the region of £ 1.26

The band play the Birmingham LG Arena in November – and we’re giving you the chance to win special hospitality passes.

We’ll get you a hotel, a pre-show meal at the venue, drinks in the VIP bas and then give you great seats – plus VIP parking if you need it!

For a chance to win, just answer the fowling question:

A: Taste the Pain

B: Taste the Rain

Texts cost £1 plus your standard rate.

Lines close at 9am on September 8th