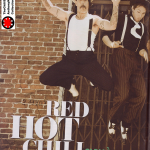 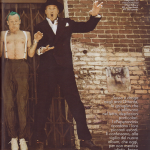 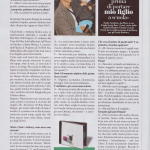 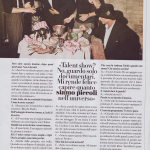 Many thanks to Simona for kindly providing us with the scans!

“Sex and drugs in the eighties, the groupies who crawled into bed, hair removal details. Hot Peppers remember their beginnings. And confess, on the eve of the new album now, not to “feel stupid”, do normal things. Where children enter documentaries.

Chad: “But like his leather jacket.”
Thanks, I like your songs!
Anthony: “Anthony: “You want a piece chocolatte? It’s very good, super dark.”
Chad: “Wow! Her earrings are just great, seem to satellite dishes.”

By the way, tell me about the new album?

Chad: “Ok, but I’d rather talk about boobs.”

If you think this dialogue is surreal, expect more, ask what Anthony: “I can say of the vagina Vanity Fair?”
Chad Smith and Anthony Kiedis are, respectively, drummer and vocalist of the Red Hot Chili Peppers. See you at the Casa del Mar hotel overlooking the Pacific Ocean in Santa Monica. The opportunity and the output, August 30, I’m With You, funk rock group’s latest effort was born in Lost Angeles nearly three decades ago.
Like any self-respecting rock band, the Red Hot Chili Peppers have gone through the usual stages: in addition to rock, there have been sex and drugs. But even there difficulties related to the complicated relationship with the success, the excess money, alcohol rivers. They faced death by overdose, one of them, Hillel Slovak. They risked the dissolution several times, and suffered few defections, the last, that of John Frusciante, the guitarist, replaced by Josh Klinghoffer for the last album.

Yet the peppers are still hot, ready to cash in on the success of the single-Rain Dance The Adventures of Maggie, already released in radio stations around the world. And to talk with a wisp of melancholy of the old days, those “If he were still around, as then, we would be idiots”

Then, Chad and Anthony, how is a song born?

Anthony: “One day you’re in the room with your band, you start to improvise and come from nothing to the song. It’s a nice moment as if the Creator were to say:” Good job! Your energy has given rise to something concrete. “And the fruit of that energy and your feelings inside, that is happiness or sadness.”

Is it better to be happy or depressed to create?

Anthony: “The important thing is being together, playing our instrument. Improvise, and become a truly great band, it comes out soon. ”

Chad: “If it were not for Anthony, we would only be able to strum. But he records what he hears and then if we play at home, or in the car, and the next day back to us and says “Listen to this.”

What is the best time of the day to create?

Anthony:”The day. In the morning or early afternoon. It’s all about to begin.”

And early morning, to be a rock star.

Anthony: “If I get up at 5 and a half,  I’m going to surf before you take my son to school. Staying awake at night and out of fashion. If I were still living the lifestyle of the eighties, I’d feel like- and I would be- a real idiot.”

What do you remember those years? Above all, remember something?

Anthony: “I have good memories of those years. It was a magical moment. And when I met Chad and and how much he refused to cut hair to zero.”

Anthony: “We were looking for a drummer, they suggested this guy’s very good. We tried it and it and knew it was perfect for us. But had that hair! Then I left a message on the secretary: “You are ours, but you have to cut your hair.”

Chad: “Remember that, and I remember thinking “Fuck That will not make it.” They were long, under a bandana. I didn’t cut them, and so I presented the first test: it was too funny disobey their initiation rite”.

Anthony: “But at the end he cut them.”

Anthony: “”We had no choice but to stay together. Without money, no home, only perhaps one of us had a car. The phone had not yet been invented, let alone the Internet. If you wanted to make music together you could not help but feel the same place and play. we were forced to stay together for warmth – literally-with one another. It was an important period for built the group. I remember the discomfort of having to stay together to survive. Then, we made more money the further we move: the houses became large, and lost that sense of immediacy.”

But you’re still together after nearly thirty years. It’s not all.

Anthony: “”I often wonder how I have done so much to resist. Or rather, I wonder what happens when you dissolve the other: the first success and then have nothing at all around. Maybe we just too afraid to make another and fail. And even if someone is going, who is trying to find a replacement and continue. ”

Like Josh, who has replaced Frusciante. As you have discovered?

Anthony: “He played for the band that opened the concert, The Bicycle Thief.”

Bell ‘tribute to our cinema, The Bicycle Thief.

Chad: “And Frusciante was of Italian descent. We have a link with Italy.”

So you have to look far.

Anthony: “It was not easy. He is a lovely guy, a young and shy.”

And now and the only one without a wife and children. Now the groupies are all for him.

This is the maximum of madness made by a fan? Crawl into your bed.

Anthony: “Can I say vagina?”

Anthony: “Good, because the vagina enters the scene more than once in this genre of anecdotes. Once we where in Colorado, a young girl shows up and shows me a tattoo. It was engraved the name of the Red Hot Chili Peppers around the pubis. Another had waxed so that the hairs had the form of Asterix, the symbol of the band.”

Chad: “I do not know this! I have to tell it on Twitter.”

Are you a fan of social networks?

Chad: “I am a serial twitter. They gave me the license.”
Anthony: “I am absolutely not.”

Like never? Problems With Facebook?
Anthony: “None. I would if I used. I do not need to be managed from the web, I like the real world.”

What does Anthony Kiedis when not playing? What music do you listen to?

Anthony: “A bit ‘of everything. I have a device at home, called Sonos, a sound system that lets you create your radio station from a song that you like. Brings together the similar genre, it makes you hear music that you otherwise would not hear.”

And the talent shows?

Anthony: “Why should I?”

Because it intends music.

Anthony: “I do not see music as a competition. And I think I can spend my time better.”

Anthony: “I only watch documentaries. There are some magnificent. The last I saw he made me think of how small we are in the universe. If you divide a grain of sand to a million, still do not have the size. But he knows that there are stars in the universe where they would be a comfortable billions of stars like the sun? This gives the size of what we men are microscopic. There’s a thought that makes me happy. It would be worthwhile to make us a song.”

And what is your favorite song in this album?

Chad: “You ask a parent which child would you prefer?”