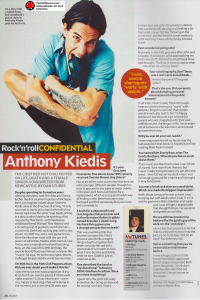 The chief Red Hot Chili Pepper on life, death and a female singer-songwriter from Newcastle. By Dan Stubbs.

Despite spending his formative years rubbing shoulders with The Who and Sonny & Cher, the first creative impulses of Michigan-born, Los Angeles-raised singer Anthony Kiedis were in the direction of acting. “It only occurred to me to join a band when all of my friends had done the same.” says Anthony Kiedis, sitting in a ritzy London hotel suite sporting a fine moustache. That band – with Anthony Kiedis plus childhood friend Michael ‘Flea’ Balzary and a recurring cast of guitarists and drummers – is now in its 28th funk-rocking year, with a new album, I’m With You, and new guitarist too. More familiar than most with the ups and downs of addiction, Anthony Kiedis’s 2004 memoir, Scar Tissue, was a manual in hard and fast living. Now, on the cusp of his 49th birthday, the muscle-bound frontman favours a cleaner life: “I want,” he says, “to be the strongest, fastest, surfingest 50-year-old the world has ever seen.”

I’m With You is the 10th Red Hot Chili Peppers album. Did you ever doubt you’d make it this far?

I don’t think we ever had a projection of any kind. And if you were to ask me if I think we’ll make another 10, I’d say I don’t care – we’re very happy to be doing what we’re doing in the moment, just as we were 28 years ago.

Not at all. When John quit for the first time we were younger, different people. It taught us how to proceed in the wake of major events. In the past we’d have auditioned for a replacement, which is a long and foolish way of finding a wife. Better to look in your backyard and find somebody that you know and can relate to.

A track for a departed friend (Los Angeles club promoter and author Brendan Mullen) is glibly named Brendan’s Death Song. Has hard living given you a strange perspective on death?

That was a working title that became a proper title. I like it because sounds like a mighty thing: a death song. Brendan Mullen’s death certainly felt sad but it opened all of our hearts to how great it is to be alive and doing what we love. Death is just as common as life.

I guess only the gods will really know that but being on the road for so long was hard. I had a broken foot and John [Frusciante’s] desires had wandered off, leaving us all feeling a bit fractured. I never felt like throwing in the towel, but I did feel that the towel needed a solid washing. It was a dirty, funky, irritated towel.

Not really. In the little grey area after John quit, a couple of producers were approaching me to do solo stuff. I listened to what they’d done and thought, “Fuck no, it’s not as cool as what I do when I’m with my band.”

Your autobiography, Scar Tissue, was a real warts and all book…

That’s the one. Did you worry about dumping personal information into the public domain?

In all truth, I didn’t really think it through. I was so used to sharing my “warts” with people, I forgot to consider that people would eventually read it. But I’m happy because it has become a go-to book for people who are struggling with their own addictions and challenges in life. I’m an example of someone who was down and out and got over the hump.

Will you ever let your son Everly read it?

I have requested that all my family stay the hell away from that book. So hopefully he’ll be reading Mark Twain instead.

You named him Everly Bear, after The Everly Brothers. What do you like so much about them?

Their music and their harmonies. I can’t think of a band I love more from that era. But I wasn’t really trying to name my son after the band – their CD was on my desk when I was rummaging around for a name and I thought it very handsome.

You met a lot of rock stars as a small child. Which one made the biggest impression?

Keith Moon, because he was so kind. I was hanging out with adults when I was 11 or 12 and he gave me a little attention and made sure I was all right. I appreciated that thoughtfulness. He was kind and gentle as could be.

Do you still feel pressure to behave like the goofy guy of the sock-on-the-cock days?

I don’t feel that pressure at all, but I like to welcome humour into the picture on most days. Not on all days? No, definitely not.

Tell us something that you’ve never told an interviewer before.

I have a huge crush on [little known but MOJO-approved British singer-songwriter] Beth Jeans Houghton. I think she’s a genius. How did I find out about her? I’ve got my ear to the street.

Transcript based on one by provided by Anthony O’Connor for Stadium-Arcadium; thank you for typing out the original.