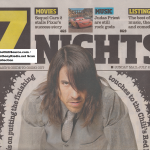 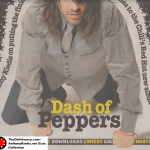 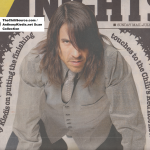 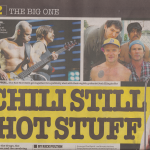 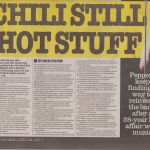 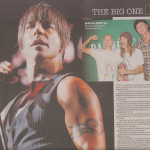 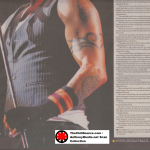 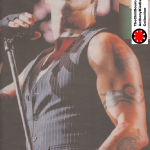 Supplement magazine that comes with the Sunday Mail (www.sundaymail.co.uk )

Note: This supplement was too big for my scanner and rather than reduce the pages and join them back together, I’ve scanned them in two halves.  Each scan has cover/page number to show its placement and is arranged in order with the top half of the page first. I’ve also re-scanned the cover and photo of Anthony Kiedis to try to get as much of them as I could on one page.

DESPITE the drugs, the overdoses and the revolving door of guitarists, the Red Hot Chili Peppers have always showed a beating heart at the centre of their funk mental rock ‘n’ roll.

Their breakout tune Under The Bridge in 1992 proved they were more than just loud party boys, with lyrics detailing loneliness and the damaging impact of narcotics.

As they prepare to release their 10th album proving, along with U2 and Depeche Mode, to be Eighties survivors, lead singer Anthony Kiedis revealed that he’s happier than he has ever been thanks to his three-year old son Everly Bear by ex-girlfriend Heather Christie.

The proud dad, 48, admitted: “He’s just the biggest part of my life that there is, so everything I do is inspired by him. He definitely quadrupled the size of my heart so I just feel more love in me.”

Given that he’s an older dad, having a baby has opened up a new world to Anthony.

He laughed: “The biggest surprise was I was always a bit of a poop-o-phobe, like I don’t know, stay away from the poop…

“And then when my son came, it was like I couldn’t wait to get my hands on the poop.

“And still today, I wipe his little bottom with such love and care, I get the wet wipe and just make sure he’s as clean as can be and I went from being a poop-o-phobe to like, it doesn’t faze me.

“He could throw his poop in my face and I wouldn’t even flinch.”

Nice image – but good to see the singer on fine form despite the loss (again) of John Frusciante. The group have now had eight guitarists since they formed in 1983, Josh Klinghoffer taking John’s place for new album I’m With You, their first in five years.

But John steered them to their creative peaks. He joined aged 18 after the death by a heroin overdose in 1988 of original guitarist Hillel Slovak, appearing on the band’s fourth album Mother’s Milk and the group’s commercial breakthrough Blood Sugar Sex Magik (1991), which reached number three in the US and five over here.

John quit the band in 1992, becoming a heroin and crack cocaine addict, before returning to the fold for 1999’s Californication – which was at the time the band’s biggest-selling album in the UK, going to number five and selling close to one million copies.

His guitar playing was even more dominant in the more melodic By The Way in 2002, which reached number two in US but one in Britain, selling 1.5million copies.

But after the group’s tour of last album Stadium Arcadium in 2007 (the album became the group’s first US number one and also went to the top in Britain), John quit and Josh joined in 2009 after a self-imposed two year hiatus.

Anthony said: “One of the bits of karmic joy was that at a point in time where maybe it would be difficult to keep it fresh, along comes a shift in our lives, whereby John decided that he wanted to do something else, creating an opportunity for us to be fresh again.”

There was no fall-out with the band that includes other founding member Flea on bass and drummer Chad Smith – and it seems Anthony doesn’t have a real reason, or one he’s giving us, as to why John quit.

“It wasn’t even a divorce, it was like ‘mission accomplished, go rock out, we’ll see you somewhere along the way!'”

The Adventures of Rain Dance Maggie, the group’s first single in four years following the 2007 release of Hump de Bump, is now on the radio ahead of the album I’m With You, Josh’s first with the band.

He fills Chili guitarist shoes that include John, Dave Navarro and Jesse Tobias – but Anthony doesn’t think Josh should be intimidated.

He said: “Josh has played with PJ Harvey, The Sparks and Cee Lo Green of Gnarls Barkley, so really I had some flipping big shoes to fill.

“Those are like a whole gang of strong vocalists that he’s accustomed to playing with.

“But does anybody care about the shoes I had to fill? No, I didn’t think so.”

Anthony is excited about the new Chilis line-up. He said: “It feels fun and like a good fit, and I think more will be revealed when we start playing live and doing things like that.

“The band has always had a sort of family, lovedriven thirst for making music with themselves and that hasn’t changed from what I’ve seen. The truth is we still play music because we love to play music, and because we love playing music as a band of friends.

“That is very much why we started. We did not exist because we were coming out of music schools wanting to do what we were told to do, we were born out of an extreme love and need for one another.

“We needed each other to exist when we began. We were poor and hungry and emotionally uncertain, we were sort of homeless little kids.

“We formed a friendship and a band based on those needs and that love for life and music – and that still exists in us.

“We still, at the end of the day, have chosen a friend to play music with, because that’s what we like to do.

“And that’s what Flea and I like to do. We could go off and do other things that were professional and successful or whatever, but it’s not as meaningful as doing this.

“The spirit started in 1983 and it’s still painfully relevant and evident in what we do.”

Their 10th studio album in a 28-year career was written in North Hollywood in a rehearsal studio called The Alley.

They worked there for almost a year “just showing up every day, Monday through Friday, with very little breaking. We played and had ideas and verses and choruses and bridges and outros and took songs and made them shorter and longer, and wrote them up on chalkboards.”

As he chats in a room in the Casa Del Mar hotel in beautiful Santa Monica overlooking the ocean, Anthony is looking exceptionally well.

Not bad for a man who has pushed his body to its limits.

After his parents split when he was 11 he moved from Michigan, where he was born, to Los Angeles and was raised by his dad John.

But John, an actor, was into drugs and even let his son lose his virginity, aged 12, to his 18-year-old girlfriend.

Descending into heroin addiction, Anthony tried to get clean after the overdose death of guitarist Slovak.

He went to rehab after he was asked to leave the band and stayed clean for five years, relapsing again in 1996 and using on and off for the next six years.

Nowadays he puts his energy into looking after his son and surfing.

He said: “I carry my boy around as much as possible, my left arm is finally as strong as my right arm, he’s been here for three years and that helps.

“I discovered surfing, which I absolutely fell in love with. That feels good and kind of keeps your body aligned, so does the salt water.

“It really is kind of an electric being, the salt water aligns you quite beautifully in the morning.

“You know, I like to climb trees and ride bikes and play.”

I’m With You is out on August 26. The Adventures of Rain Dance Maggie is out now on digital download.