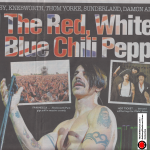 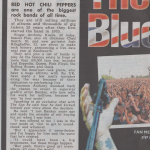 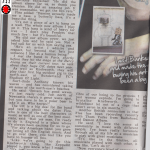 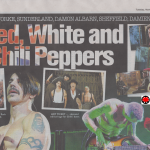 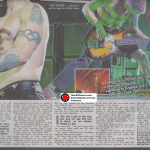 RED HOT CHILI PEPPERS are one of the biggest rock bands of all time.

They are still selling millions of albums and thousands of gig tickets 28
years after they first started the band in 1983.

They will join a list of bands to play on the famous estate in front of more
than 100,000 fans that includes Led Zeppelin, Queen, Pink Floyd, the Rolling
Stones and Oasis.

But the American rock giants, who have a huge affinity with the UK, have made
a few costly mistakes along the way because of their dedication to performing
live.

Frontman Anthony knocked back the chance to invest in superstar graffiti
artist Banksy, who now sells his work for millions, because he was “in tour
mode”.

Speaking in an exclusive chat with The Sun he told how he had kicked
himself ever since about the decision.

He said: “I met Banksy years ago and made the mistake of not buying his art
when I met him.

“It was offered to me. I was in the tour mode of, ‘Got to get to soundcheck’
and whatever.

“But I appreciate it nevertheless and I’m happy for him and the wave that
he’s created.

“It could have been a big investment, but these things happen.

“But yeah, there’s good art everywhere, all over the world.

“My surfing friends, Sage Vaughn and Michael Muller, just had a little
exhibit in Soho, London, at the Lazarides Gallery.

“Another British artist I admire, Charming Baker, had a show nearby. His is
very soulful-looking stuff.”

The sleeve of the Chilis’ most recent album, I’m With You, was
designed by Turner Prize winner Damien Hirst – who has become close friends with
the band.

Anthony explained: “He did the album sleeve for us, so thank you Damien. He
did an amazing job. It was reasonable, we got the bro rate.”

Flea added: “Damien actually made me a bass, a butterfly bass, it’s a
beautiful thing.

“It’s not a piece of art to hang on a wall. The whole new album I play on it.
This bass is kind of heavy for live — I don’t play Fenders that much live — but
it’s beautiful.

“He did our album cover, we just asked him and he said yes. Not a bad call
for us with him saying yes.

“He’s an artist I admire and respect, but beyond that he’s just someone I
like as a human being.”

I met the band in Paris, shortly before they hit the stage at the Bercy Arena
on their current tour, to talk about their huge UK dates next year.

As well as Knebworth, they will play their first big outdoor gig in the
north-east, at Sunderland FC’s Stadium Of Light.

Surf-dude Anthony knows his waves — and has considered taking on some of the
north-east’s beaches.

He said: “Britain has good waves, it’s just really cold. Just north of
Newcastle there’s a great wave spot, but you have to be a polar bear to take it
on. Who knows?”

The UK is a big deal for the band and talking about the dates Flea, who is
one of the best characters in music as well as one of the best musicians, said:
“Hell yes man, I’m ready to do it. England is a place where it’s always been
exciting for us to go.

“For any American band, you grow up loving all this English music. And to go
over there, you feel like you have to honour all this.

“Like we’re going to do this Knebworth thing, like Zeppelin played it, you
know what I mean.

“It’s just awesome. We’re going to do our best to play our hearts out, to let
go of our brains and be animals, let the music flow and give every fibre of our
being to the process. I just wanna explode. I’m going to brutalise Knebworth,
like a wildebeest let out of a cage that hasn’t eaten in six months.”

Another British connection is that Flea has been recording recently with Thom
Yorke from Radiohead, and Damon Albarn.

He said: “I love the sense of community in music with different people. I’ve
been really fortunate through all of my life as a musician to play with great
musicians.

“It’s like in the Sixties, all musicians played with each other, it was like,
‘Let’s do it’.

“Now everyone’s kind of segregated in to their little businesses — this is
our thing, and we’re cool, and we have these haircuts over here, so we don’t
play over there, whatever, we play this style of music. It’s all bull**** man.
Get out and play some music with human beings, who cares about styles or
anything — it’s music.

“I’ll play with anyone. Of course, there are certain people who I really
admire and respect as musicians.

“And I am drawn to them because of their commitment and their
willingness to use their energy to create something beautiful.

“That’s really exciting for me. Damon and I are doing a really good thing
right now. I’m really proud of what we’re doing. We’ve done some beautiful
recordings. We’re playing some shows in a couple of weeks. I respect him a lot
as a musician. He doesn’t have boundaries, he’s willing to do anything and I’m
excited to play with him, I love him. I just like being around people that I
respect.”

It isn’t just art and music where the band have a UK connection. In yet
another link with these shores, Flea’s brother-in-law is British.

He became family thanks to a wild night out in London back in 1983.

Flea explained: “It’s all down to the first time Anthony and I came over to
London. We came to England in 1983, with our first demo tape.

“We had done a few shows and his father bought us two round-trip tickets to
London, so we came and ended up staying in a youth hostel.

“You weren’t allowed to be out after 10pm, you had to be in bed. But we just
opened up the window and climbed out.

“We went out, we were looking for trouble. We were at a bus stop to just get
on a bus and go anywhere and see what happens.

“We met a guy at the stop who was our age and sort of drunk, so we started
talking to him.

“He was like, ‘I’ve just come from this party, come with me I’ll take you to
this party’.

“We went, everyone was drinking, smoking hash, pretty girls.

“We were like yeah, they were our age — we were 20 at the time because I
remember we had our 21st birthdays on that trip.

“We met this one guy who we hit it off with. He said we could come and stay
at his house.

“So we went and got our stuff from the youth hostel, went and stayed at this
guy’s house, slept on his floor in a flat in Catford.

“We stayed there for a couple of weeks, had a lot of fun, smoked a lot of
hash, hitchhiked around. Visited (Somerset market town) Castle Cary, had a lot
of fun.

“And then, three or four years later or something, he came to LA and I was on
tour.

“I didn’t even know. He went to my address and knocked on my door. I wasn’t
there but my sister was living next door.

“He said he was looking for Flea, he had met me in England.

“She said I was on tour and they started chatting. Anyway, they fell in love
and got married. Now it’s like 25 years later and they have a 13-year-old
daughter and they’ve been married for 20 years. I consider myself actually
English.”

So much so, the die-hard LA Lakers basketball fan actually has another team
in his life — football’s Sheffield Utd.

He said: “My team is Sheffield United. The Blades man, go Blades.

“The truth is I don’t really know a lot about it but I love the game. The
soccer that we have in America is not on a par.”

The Chilis play Knebworth Park on June 23 next year and the Stadium Of Light
on June 24. O2 customers can get Priority Tickets, hospitality and hotel
packages, 48 hours before general release, from 9am tomorrow. Register now by
texting RED to 2020 or visit o2priority.co.uk/RHCP. Tickets go on general sale from 9am on Friday at kililive.com/RHCP.

Printed in today’s (November 1st 2011) edition of The Sun newspaper;
transcript from The Sun website: Source